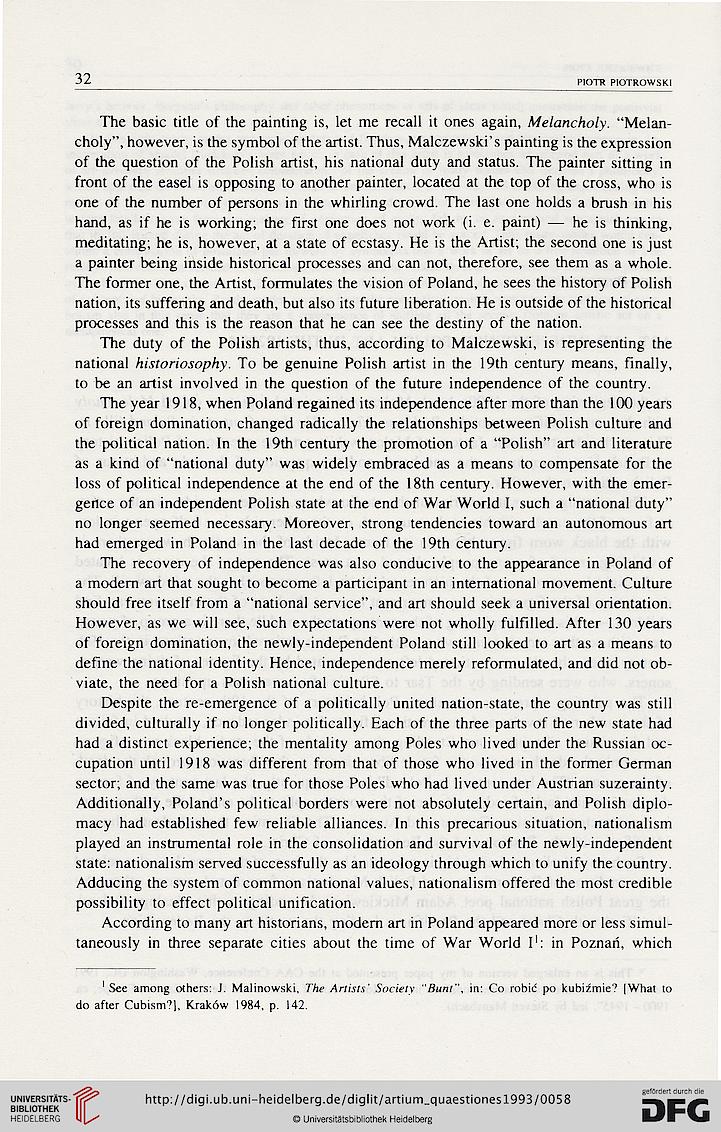 The basic title of the painting is, let me recall it ones again. Melancholy. “Melan-
choly”, however, is the symbol of the artist. Thus, Malczewski’s painting is the expression
of the question of the Polish artist, his national duty and status. The painter sitting in
front of the easel is opposing to another painter, located at the top of the cross, who is
one of the number of persons in the whirling crowd. The last one holds a brush in his
hand, as if he is working; the first one does not work (i. e. paint) — he is thinking,
meditating; he is, however, at a state of ecstasy. He is the Artist; the second one is just
a painter being inside historical processes and can not, therefore, see them as a whole.
The former one, the Artist, formulates the vision of Poland, he sees the history of Polish
nation, its suffering and death, but also its future liberation. He is outside of the historical
processes and this is the reason that he can see the destiny of the nation.
The duty of the Polish artists, thus, according to Malczewski, is representing the
national historiosophy. To be genuine Polish artist in the 19th century means, finally,
to be an artist involved in the question of the future independence of the country.
The year 1918, when Poland regained its independence after more than the 100 years
of foreign domination, changed radically the relationships between Polish culture and
the political nation. In the 19th century the promotion of a “Polish” art and literature
as a kind of “national duty” was widely embraced as a means to compensate for the
loss of political independence at the end of the 18th century. However, with the emer-
gence of an independent Polish state at the end of War World I, such a “national duty”
no longer seemed necessary. Moreover, strong tendencies toward an autonomous art
had emerged in Poland in the last decade of the 19th century.
The recovery of independence was also conducive to the appearance in Poland of
a modem art that sought to become a participant in an international movement. Culture
should free itself from a “national service”, and art should seek a universal orientation.
However, as we will see, such expectations were not wholly fulfilled. After 130 years
of foreign domination, the newly-independent Poland still looked to art as a means to
define the national identity. Hence, independence merely reformulated, and did not ob-
viate, the need for a Polish national culture.
Despite the re-emergence of a politically united nation-state, the country was still
divided, culturally if no longer politically. Each of the three parts of the new state had
had a distinct experience; the mentality among Poles who lived under the Russian oc-
cupation until 1918 was different from that of those who lived in the former German
sector; and the same was true for those Poles who had lived under Austrian suzerainty.
Additionally, Poland’s political borders were not absolutely certain, and Polish diplo-
macy had established few reliable alliances. In this precarious situation, nationalism
played an instrumental role in the consolidation and survival of the newly-independent
state: nationalism served successfully as an ideology through which to unify the country.
Adducing the system of common national values, nationalism offered the most credible
possibility to effect political unification.
According to many art historians, modem art in Poland appeared more or less simul-
taneously in three separate cities about the time of War World I1: in Poznan, which