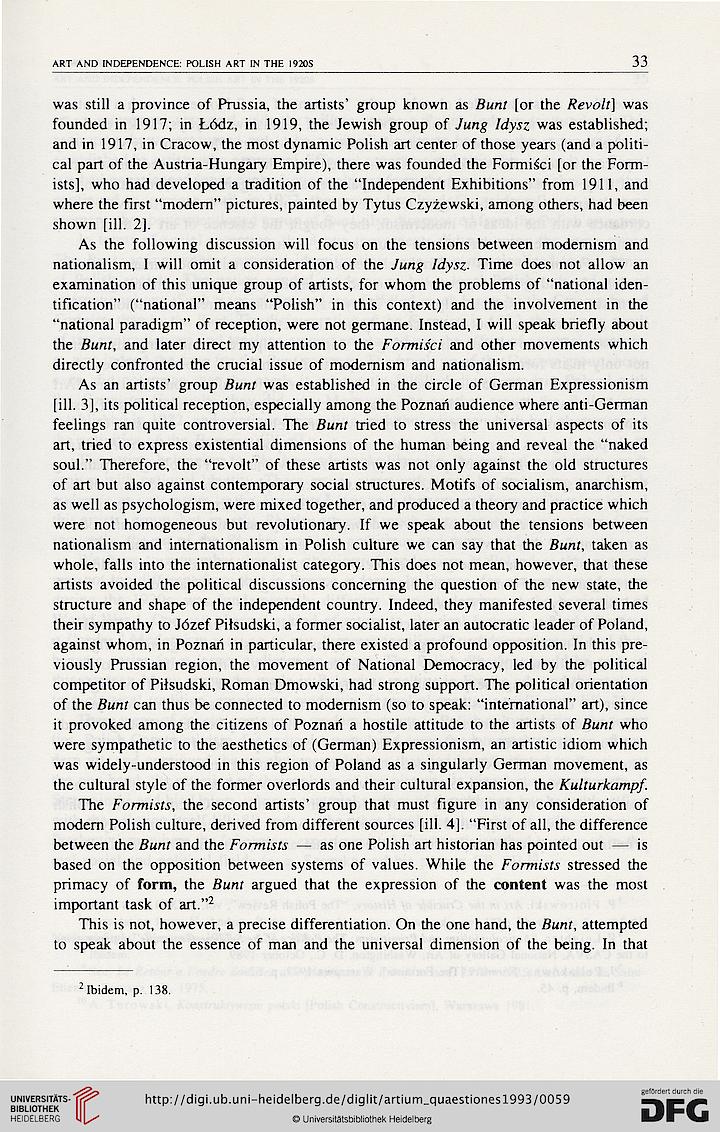 Information about OCR text
ART AND INDEPENDENCE: POLISH ART IN THE 1920S

was still a province of Prussia, the artists’ group known as Bunt [or the Revolt] was
founded in 1917; in Łódź, in 1919, the Jewish group of Jung Idysz was established;
and in 1917, in Cracow, the most dynamic Polish art center of those years (and a politi-
cal part of the Austria-Hungary Empire), there was founded the Formiści [or the Form-
ists], who had developed a tradition of the “Independent Exhibitions” from 1911, and
where the first “modem” pictures, painted by Tytus Czyżewski, among others, had been
shown [ill. 2].
As the following discussion will focus on the tensions between modernism and
nationalism, I will omit a consideration of the Jung Idysz. Time does not allow an
examination of this unique group of artists, for whom the problems of “national iden-
tification” (“national” means “Polish” in this context) and the involvement in the
“national paradigm” of reception, were not germane. Instead, I will speak briefly about
the Bunt, and later direct my attention to the Formiści and other movements which
directly confronted the crucial issue of modernism and nationalism.
As an artists’ group Bunt was established in the circle of German Expressionism
[ill. 3], its political reception, especially among the Poznan audience where anti-German
feelings ran quite controversial. The Bunt tried to stress the universal aspects of its
art, tried to express existential dimensions of the human being and reveal the “naked
soul.” Therefore, the “revolt” of these artists was not only against the old structures
of art but also against contemporary social structures. Motifs of socialism, anarchism,
as well as psychologism, were mixed together, and produced a theory and practice which
were not homogeneous but revolutionary. If we speak about the tensions between
nationalism and internationalism in Polish culture we can say that the Bunt, taken as
whole, falls into the internationalist category. This does not mean, however, that these
artists avoided the political discussions concerning the question of the new state, the
structure and shape of the independent country. Indeed, they manifested several times
their sympathy to Józef Piłsudski, a former socialist, later an autocratic leader of Poland,
against whom, in Poznań in particular, there existed a profound opposition. In this pre-
viously Prussian region, the movement of National Democracy, led by the political
competitor of Piłsudski, Roman Dmowski, had strong support. The political orientation
of the Bunt can thus be connected to modernism (so to speak: “international” art), since
it provoked among the citizens of Poznan a hostile attitude to the artists of Bunt who
were sympathetic to the aesthetics of (German) Expressionism, an artistic idiom which
was widely-understood in this region of Poland as a singularly German movement, as
the cultural style of the former overlords and their cultural expansion, the Kulturkampf.
The Formists, the second artists’ group that must figure in any consideration of
modem Polish culture, derived from different sources [ill. 4], “First of all, the difference
between the Bunt and the Formists — as one Polish art historian has pointed out — is
based on the opposition between systems of values. While the Formists stressed the
primacy of form, the Bunt argued that the expression of the content was the most
important task of art.”2
This is not, however, a precise differentiation. On the one hand, the Bunt, attempted
to speak about the essence of man and the universal dimension of the being. In that