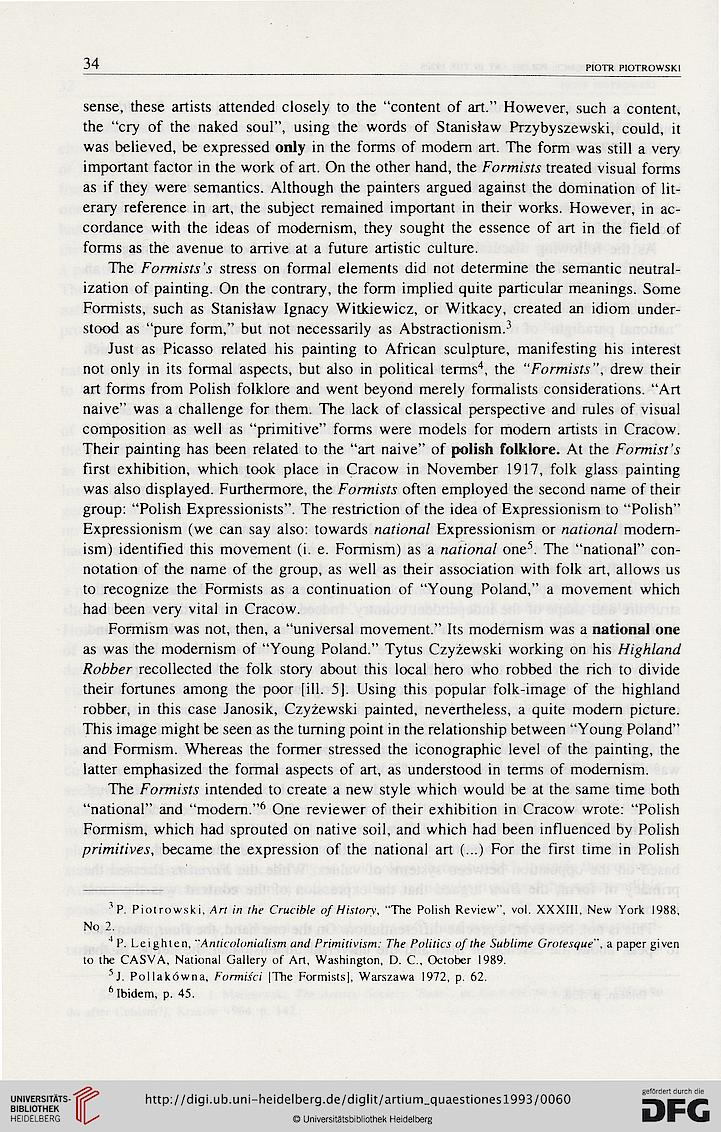 sense, these artists attended closely to the “content of art.” However, such a content,
the “cry of the naked soul”, using the words of Stanisław Przybyszewski, could, it
was believed, be expressed only in the forms of modem art. The form was still a very
important factor in the work of art. On the other hand, the Formists treated visual forms
as if they were semantics. Although the painters argued against the domination of lit-
erary reference in art, the subject remained important in their works. However, in ac-
cordance with the ideas of modernism, they sought the essence of art in the field of
forms as the avenue to arrive at a future artistic culture.
The Formists’s stress on formal elements did not determine the semantic neutral-
ization of painting. On the contrary, the form implied quite particular meanings. Some
Formists, such as Stanisław Ignacy Witkiewicz, or Witkacy, created an idiom under-
stood as “pure form,” but not necessarily as Abstractionism.3
Just as Picasso related his painting to African sculpture, manifesting his interest
not only in its formal aspects, but also in political terms4, the "Formists”, drew their
art forms from Polish folklore and went beyond merely formalists considerations. “Art
naive” was a challenge for them. The lack of classical perspective and rules of visual
composition as well as “primitive” forms were models for modem artists in Cracow.
Their painting has been related to the “art naive” of polish folklore. At the Formist's
first exhibition, which took place in Cracow in November 1917, folk glass painting
was also displayed. Furthermore, the Formists often employed the second name of their
group: “Polish Expressionists”. The restriction of the idea of Expressionism to “Polish”
Expressionism (we can say also: towards national Expressionism or national modern-
ism) identified this movement (i. e. Formism) as a national one5. The “national” con-
notation of the name of the group, as well as their association with folk art, allows us
to recognize the Formists as a continuation of “Young Poland,” a movement which
had been very vital in Cracow.
Formism was not, then, a “universal movement.” Its modernism was a national one
as was the modernism of “Young Poland.” Tytus Czyżewski working on his Highland
Robber recollected the folk story about this local hero who robbed the rich to divide
their fortunes among the poor [ill. 5]. Using this popular folk-image of the highland
robber, in this case Janosik, Czyżewski painted, nevertheless, a quite modem picture.
This image might be seen as the turning point in the relationship between “Young Poland”
and Formism. Whereas the former stressed the iconographie level of the painting, the
latter emphasized the formal aspects of art, as understood in terms of modernism.
The Formists intended to create a new style which would be at the same time both
“national” and “modem.”6 One reviewer of their exhibition in Cracow wrote: “Polish
Formism, which had sprouted on native soil, and which had been influenced by Polish
primitives, became the expression of the national art (...) For the first time in Polish