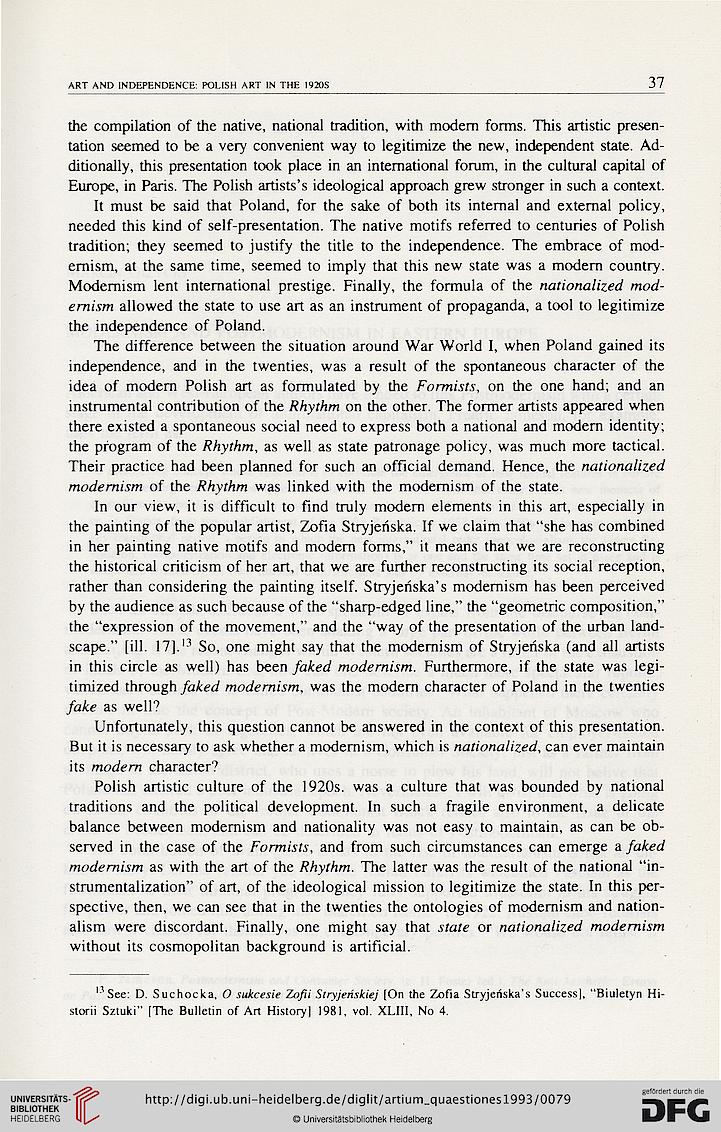 Information about OCR text
ART AND INDEPENDENCE: POLISH ART IN THE I920S

the compilation of the native, national tradition, with modem forms. This artistic presen-
tation seemed to be a very convenient way to legitimize the new, independent state. Ad-
ditionally, this presentation took place in an international forum, in the cultural capital of
Europe, in Paris. The Polish artists’s ideological approach grew stronger in such a context.
It must be said that Poland, for the sake of both its internal and external policy,
needed this kind of self-presentation. The native motifs referred to centuries of Polish
tradition; they seemed to justify the title to the independence. The embrace of mod-
ernism, at the same time, seemed to imply that this new state was a modem country.
Modernism lent international prestige. Finally, the formula of the nationalized mod-
ernism allowed the state to use art as an instrument of propaganda, a tool to legitimize
the independence of Poland.
The difference between the situation around War World I, when Poland gained its
independence, and in the twenties, was a result of the spontaneous character of the
idea of modem Polish art as formulated by the Formists, on the one hand; and an
instrumental contribution of the Rhythm on the other. The former artists appeared when
there existed a spontaneous social need to express both a national and modem identity;
the program of the Rhythm, as well as state patronage policy, was much more tactical.
Their practice had been planned for such an official demand. Hence, the nationalized
modernism of the Rhythm was linked with the modernism of the state.
In our view, it is difficult to find truly modem elements in this art, especially in
the painting of the popular artist, Zofia Stryjeńska. If we claim that “she has combined
in her painting native motifs and modem forms,” it means that we are reconstructing
the historical criticism of her art, that we are further reconstructing its social reception,
rather than considering the painting itself. Stryjeńska’s modernism has been perceived
by the audience as such because of the “sharp-edged line,” the “geometric composition,”
the “expression of the movement,” and the “way of the presentation of the urban land-
scape.” [ill. 17],13 So, one might say that the modernism of Stryjeńska (and all artists
in this circle as well) has been faked modernism. Furthermore, if the state was legi-
timized through faked modernism, was the modem character of Poland in the twenties
fake as well?
Unfortunately, this question cannot be answered in the context of this presentation.
But it is necessary to ask whether a modernism, which is nationalized, can ever maintain
its modem character?
Polish artistic culture of the 1920s. was a culture that was bounded by national
traditions and the political development. In such a fragile environment, a delicate
balance between modernism and nationality was not easy to maintain, as can be ob-
served in the case of the Formists, and from such circumstances can emerge a faked
modernism as with the art of the Rhythm. The latter was the result of the national “in-
strumentalization” of art, of the ideological mission to legitimize the state. In this per-
spective, then, we can see that in the twenties the ontologies of modernism and nation-
alism were discordant. Finally, one might say that state or nationalized modernism
without its cosmopolitan background is artificial.