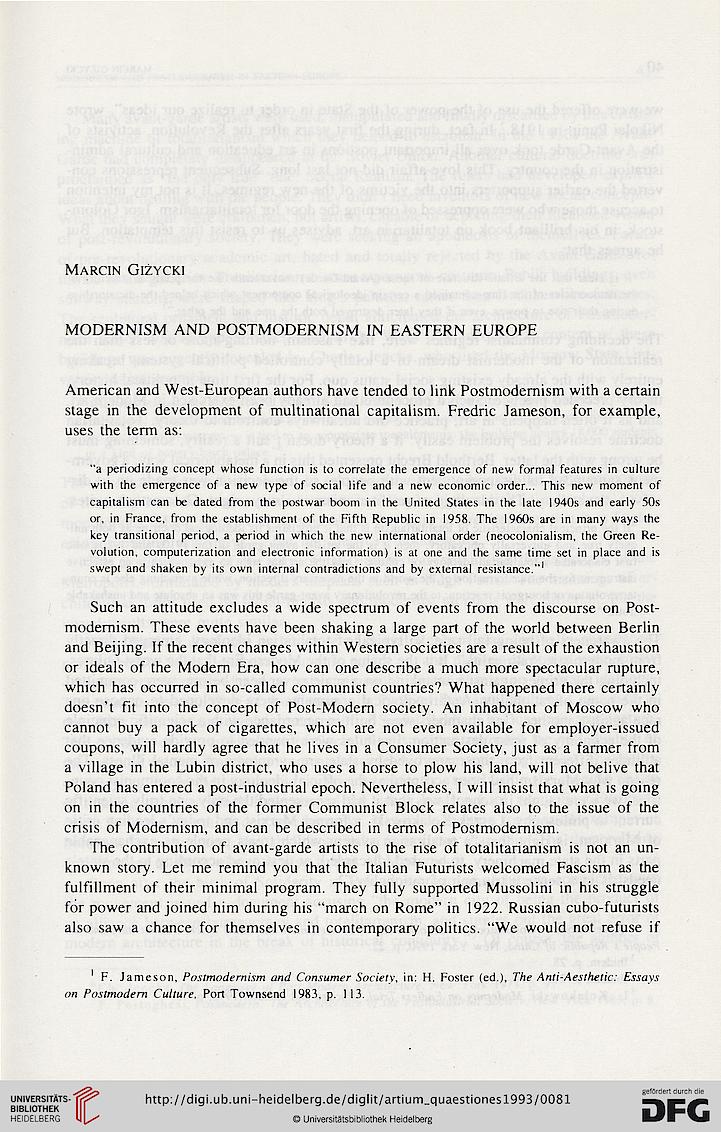 MODERNISM AND POSTMODERNISM IN EASTERN EUROPE

American and West-European authors have tended to link Postmodernism with a certain
stage in the development of multinational capitalism. Fredric Jameson, for example,
uses the term as:

“a periodizing concept whose function is to correlate the emergence of new formal features in culture
with the emergence of a new type of social life and a new economic order... This new moment of
capitalism can be dated from the postwar boom in the United States in the late 1940s and early 50s
or, in France, from the establishment of the Fifth Republic in 1958. The 1960s are in many ways the
key transitional period, a period in which the new international order (neocolonialism, the Green Re-
volution, computerization and electronic information) is at one and the same time set in place and is
swept and shaken by its own internal contradictions and by external resistance.”1
Such an attitude excludes a wide spectrum of events from the discourse on Post-
modernism. These events have been shaking a large part of the world between Berlin
and Beijing. If the recent changes within Western societies are a result of the exhaustion
or ideals of the Modem Era, how can one describe a much more spectacular rupture,
which has occurred in so-called communist countries? What happened there certainly
doesn’t fit into the concept of Post-Modem society. An inhabitant of Moscow who
cannot buy a pack of cigarettes, which are not even available for employer-issued
coupons, will hardly agree that he lives in a Consumer Society, just as a farmer from
a village in the Lubin district, who uses a horse to plow his land, will not belive that
Poland has entered a post-industrial epoch. Nevertheless, I will insist that what is going
on in the countries of the former Communist Block relates also to the issue of the
crisis of Modernism, and can be described in terms of Postmodernism.
The contribution of avant-garde artists to the rise of totalitarianism is not an un-
known story. Let me remind you that the Italian Futurists welcomed Fascism as the
fulfillment of their minimal program. They fully supported Mussolini in his struggle
for power and joined him during his “march on Rome” in 1922. Russian cubo-futurists
also saw a chance for themselves in contemporary politics. “We would not refuse if