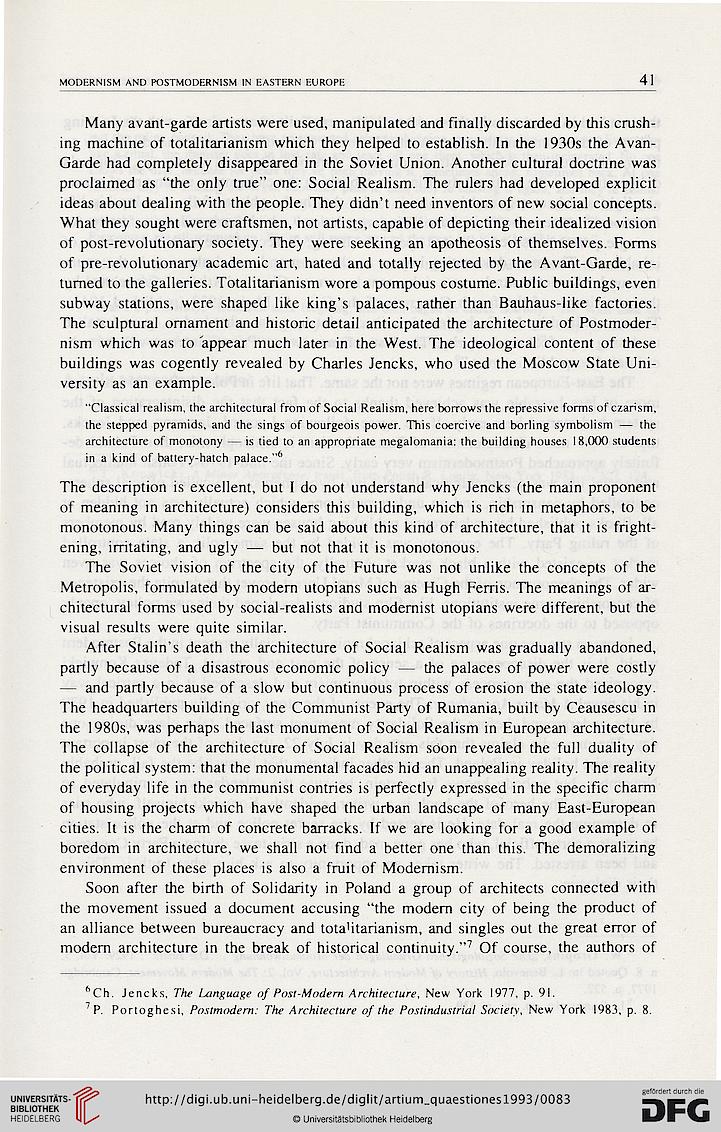 Information about OCR text
MODERNISM AND POSTMODERNISM IN EASTERN EUROPE

Many avant-garde artists were used, manipulated and finally discarded by this crush-
ing machine of totalitarianism which they helped to establish. In the 1930s the Avan-
Garde had completely disappeared in the Soviet Union. Another cultural doctrine was
proclaimed as “the only true” one: Social Realism. The rulers had developed explicit
ideas about dealing with the people. They didn’t need inventors of new social concepts.
What they sought were craftsmen, not artists, capable of depicting their idealized vision
of post-revolutionary society. They were seeking an apotheosis of themselves. Forms
of pre-revolutionary academic art, hated and totally rejected by the Avant-Garde, re-
turned to the galleries. Totalitarianism wore a pompous costume. Public buildings, even
subway stations, were shaped like king’s palaces, rather than Bauhaus-like factories.
The sculptural ornament and historic detail anticipated the architecture of Postmoder-
nism which was to appear much later in the West. The ideological content of these
buildings was cogently revealed by Charles Jencks, who used the Moscow State Uni-
versity as an example.
“Classical realism, the architectural from of Social Realism, here borrows the repressive forms of czarism,
the stepped pyramids, and the sings of bourgeois power. This coercive and borling symbolism — the
architecture of monotony — is tied to an appropriate megalomania: the building houses 18,000 students
in a kind of battery-hatch palace.”6
The description is excellent, but I do not understand why Jencks (the main proponent
of meaning in architecture) considers this building, which is rich in metaphors, to be
monotonous. Many things can be said about this kind of architecture, that it is fright-
ening, irritating, and ugly — but not that it is monotonous.
The Soviet vision of the city of the Future was not unlike the concepts of the
Metropolis, formulated by modem Utopians such as Hugh Ferris. The meanings of ar-
chitectural forms used by social-realists and modernist Utopians were different, but the
visual results were quite similar.
After Stalin’s death the architecture of Social Realism was gradually abandoned,
partly because of a disastrous economic policy — the palaces of power were costly
— and partly because of a slow but continuous process of erosion the state ideology.
The headquarters building of the Communist Party of Rumania, built by Ceausescu in
the 1980s, was perhaps the last monument of Social Realism in European architecture.
The collapse of the architecture of Social Realism soon revealed the full duality of
the political system: that the monumental facades hid an unappealing reality. The reality
of everyday life in the communist contries is perfectly expressed in the specific charm
of housing projects which have shaped the urban landscape of many East-European
cities. It is the charm of concrete barracks. If we are looking for a good example of
boredom in architecture, we shall not find a better one than this. The demoralizing
environment of these places is also a fruit of Modernism.
Soon after the birth of Solidarity in Poland a group of architects connected with
the movement issued a document accusing “the modem city of being the product of
an alliance between bureaucracy and tota'itarianism, and singles out the great error of
modem architecture in the break of historical continuity.”7 Of course, the authors of