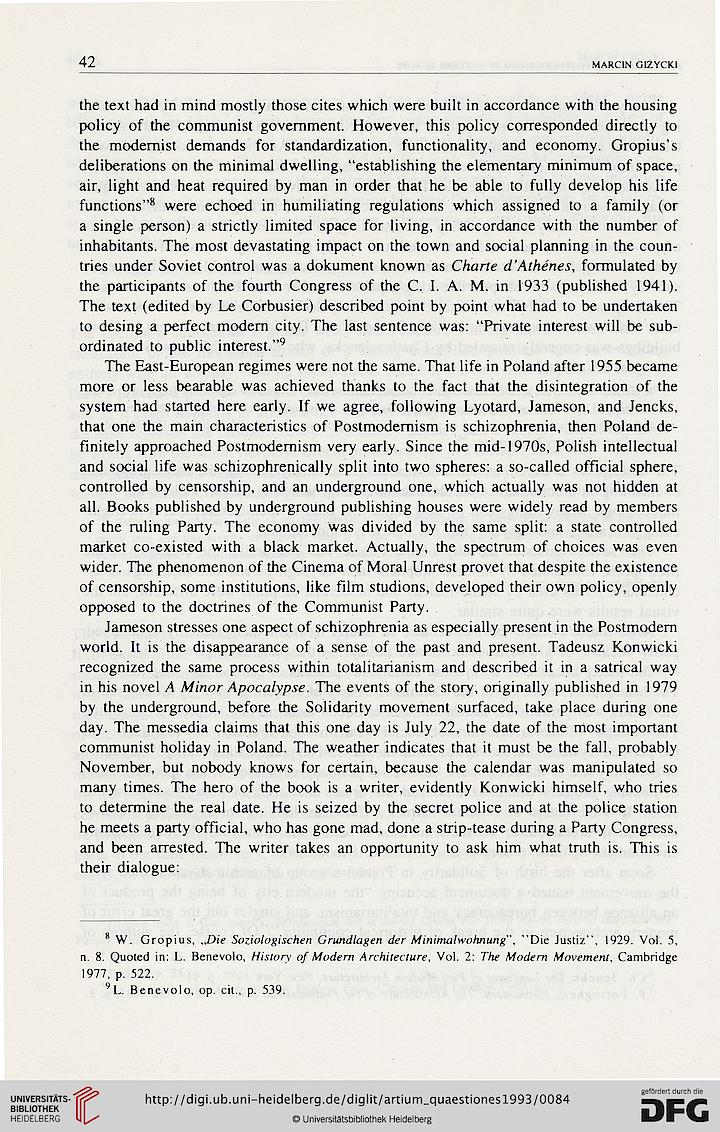 the text had in mind mostly those cites which were built in accordance with the housing
policy of the communist government. However, this policy corresponded directly to
the modernist demands for standardization, functionality, and economy. Gropius’s
deliberations on the minimal dwelling, “establishing the elementary minimum of space,
air, light and heat required by man in order that he be able to fully develop his life
functions”8 were echoed in humiliating regulations which assigned to a family (or
a single person) a strictly limited space for living, in accordance with the number of
inhabitants. The most devastating impact on the town and social planning in the coun-
tries under Soviet control was a dokument known as Charte d’Athènes, formulated by
the participants of the fourth Congress of the C, I. A. M. in 1933 (published 1941).
The text (edited by Le Corbusier) described point by point what had to be undertaken
to desing a perfect modem city. The last sentence was: “Private interest will be sub-
ordinated to public interest.”9
The East-European regimes were not the same. That life in Poland after 1955 became
more or less bearable was achieved thanks to the fact that the disintegration of the
system had started here early. If we agree, following Lyotard, Jameson, and Jencks,
that one the main characteristics of Postmodernism is schizophrenia, then Poland de-
finitely approached Postmodernism very early. Since the mid-1970s, Polish intellectual
and social life was schizophrenically split into two spheres: a so-called official sphere,
controlled by censorship, and an underground one, which actually was not hidden at
all. Books published by underground publishing houses were widely read by members
of the ruling Party. The economy was divided by the same split: a state controlled
market co-existed with a black market. Actually, the spectrum of choices was even
wider. The phenomenon of the Cinema of Moral Unrest provet that despite the existence
of censorship, some institutions, like film studions, developed their own policy, openly
opposed to the doctrines of the Communist Party.
Jameson stresses one aspect of schizophrenia as especially present in the Postmodern
world. It is the disappearance of a sense of the past and present. Tadeusz Konwicki
recognized the same process within totalitarianism and described it in a satrical way
in his novel A Minor Apocalypse. The events of the story, originally published in 1979
by the underground, before the Solidarity movement surfaced, take place during one
day. The messedia claims that this one day is July 22, the date of the most important
communist holiday in Poland. The weather indicates that it must be the fall, probably
November, but nobody knows for certain, because the calendar was manipulated so
many times. The hero of the book is a writer, evidently Konwicki himself, who tries
to determine the real date. He is seized by the secret police and at the police station
he meets a party official, who has gone mad, done a strip-tease during a Party Congress,
and been arrested. The writer takes an opportunity to ask him what truth is. This is
their dialogue: