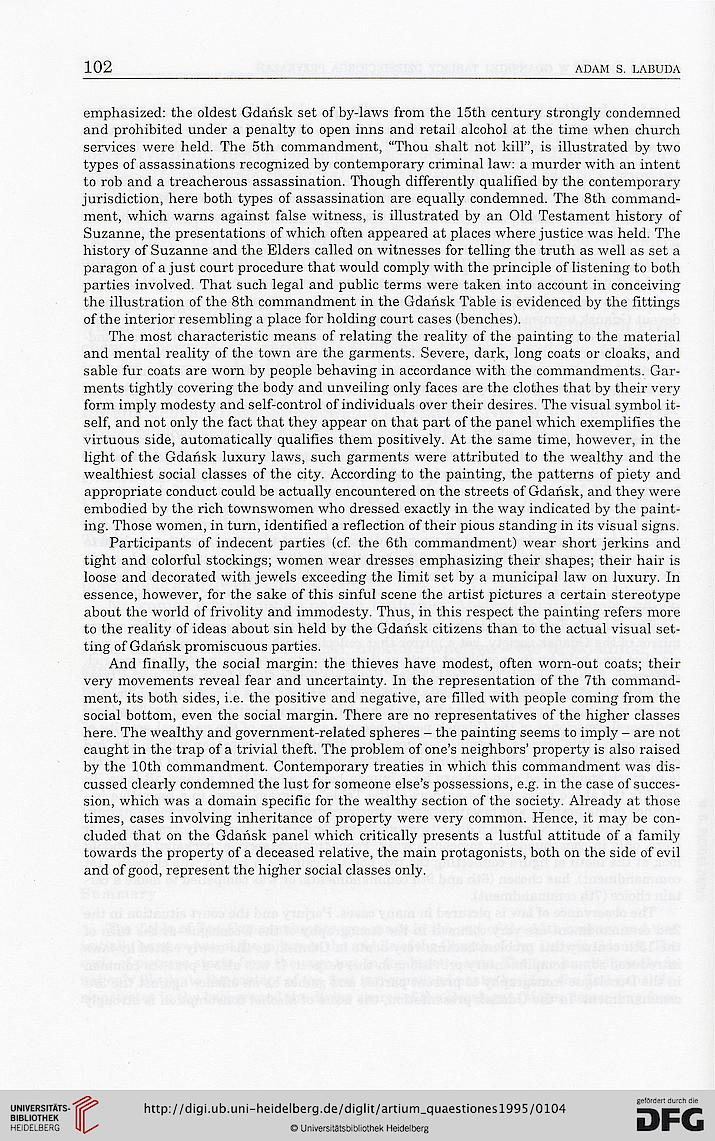 emphasized: the oldest Gdańsk set of by-laws from the 15th century strongly condemned
and prohibited under a penalty to open inns and retail alcohol at the time when church
services were held. The 5th commandment, “Thou shalt not kill”, is illustrated by two
types of assassinations recognized by contemporary criminal law: a murder with an intent
to rob and a treacherous assassination. Though differently qualified by the contemporary
jurisdiction, here both types of assassination are equally condemned. The 8th command-
ment, which warns against false witness, is illustrated by an Old Testament history of
Suzanne, the presentations of which often appeared at places where justice was held. The
history of Suzanne and the Elders called on witnesses for telling the truth as well as set a
paragon of a just court procedure that would comply with the principle of listening to both
parties involved. That such legal and public terms were taken into account in conceiving
the illustration of the 8th commandment in the Gdańsk Table is evidenced by the fittings
of the interior resembling a place for holding court cases (benches).
The most characteristic means of relating the reality of the painting to the material
and mental reality of the town are the garments. Severe, dark, long coats or cloaks, and
sable fur coats are worn by people behaving in accordance with the commandments. Gar-
ments tightly covering the body and unveiling only faces are the clothes that by their very
form imply modesty and self-control of individuals over their desires. The visual symbol it-
self, and not only the fact that they appear on that part of the panel which exemplifies the
virtuous side, automatically qualifies them positively. At the same time, however, in the
light of the Gdańsk luxury laws, such garments were attributed to the wealthy and the
wealthiest social classes of the city. According to the painting, the patterns of piety and
appropriate conduct could be actually encountered on the streets of Gdańsk, and they were
embodied by the rich townswomen who dressed exactly in the way indicated by the paint-
ing. Those women, in turn, identified a reflection of their pious standing in its visual signs.
Participants of indecent parties (cf. the 6th commandment) wear short jerkins and
tight and colorful stockings; women wear dresses emphasizing their shapes; their hair is
loose and decorated with jewels exceeding the limit set by a municipal law on luxury. In
essence, however, for the sake of this sinful scene the artist pictures a certain stereotype
about the world of frivolity and immodesty. Thus, in this respect the painting refers more
to the reality of ideas about sin held by the Gdańsk citizens than to the actual visual set-
ting of Gdańsk promiscuous parties.
And finally, the social margin: the thieves have modest, often worn-out coats; their
very movements reveal fear and uncertainty. In the representation of the 7th command-
ment, its both sides, i.e. the positive and negative, are filled with people coming from the
social bottom, even the social margin. There are no representatives of the higher classes
here. The wealthy and government-related spheres - the painting seems to imply - are not
caught in the trap of a trivial theft. The problem of one’s neighbors’ property is also raised
by the 10th commandment. Contemporary treaties in which this commandment was dis-
cussed clearly condemned the lust for someone else’s possessions, e.g. in the case of succes-
sion, which was a domain specific for the wealthy section of the society. Already at those
times, cases involving inheritance of property were very common. Hence, it may be con-
cluded that on the Gdańsk panel which critically presents a lustful attitude of a family
towards the property of a deceased relative, the main protagonists, both on the side of evil
and of good, represent the higher social classes only.