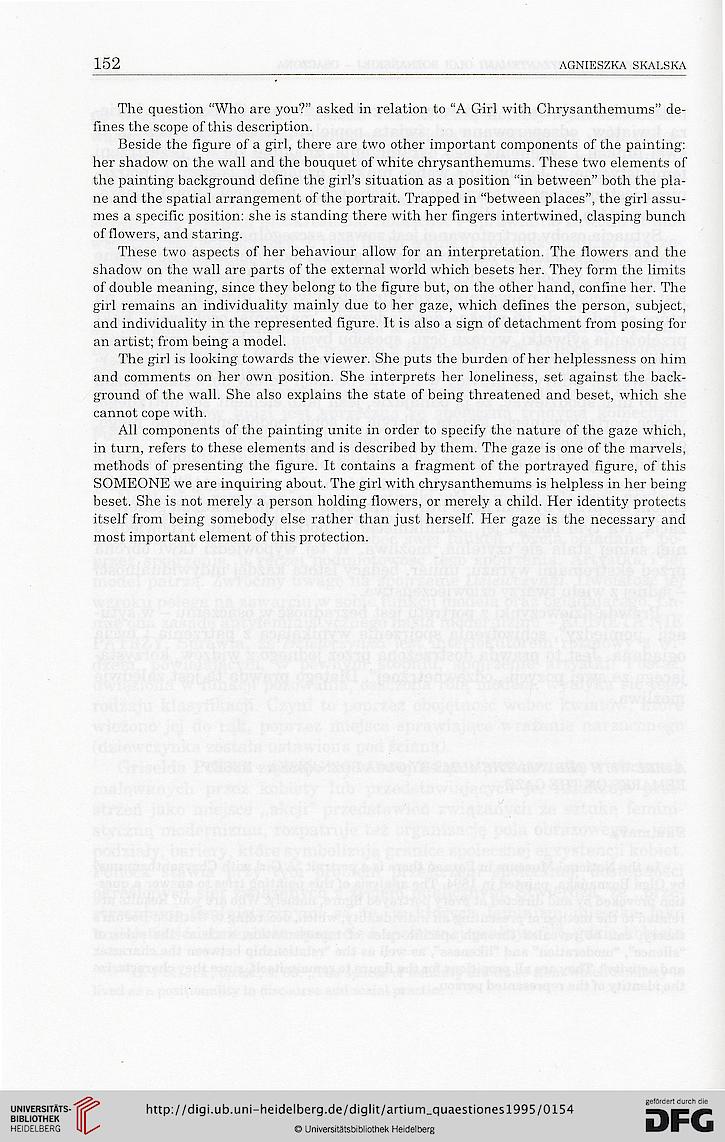 The question “Who are you?” asked in relation to “A Girl with Chrysanthemums” de-
fines the scope of this description.
Beside the figure of a girl, there are two other important components of the painting:
her shadow on the wall and the bouquet of white chrysanthemums. These two elements of
the painting background define the girl’s situation as a position “in between” both the pla-
ne and the spatial arrangement of the portrait. Trapped in “between places”, the girl assu-
mes a specific position: she is standing there with her fingers intertwined, clasping bunch
of flowers, and staring.
These two aspects of her behaviour allow for an interpretation. The flowers and the
shadow on the wall are parts of the external world which besets her. They form the limits
of double meaning, since they belong to the figure but, on the other hand, confine her. The
girl remains an individuality mainly due to her gaze, which defines the person, subject,
and individuality in the represented figure. It is also a sign of detachment from posing for
an artist; from being a model.
The girl is looking towards the viewer. She puts the burden of her helplessness on him
and comments on her own position. She interprets her loneliness, set against the back-
ground of the wall. She also explains the state of being threatened and beset, which she
cannot cope with.
All components of the painting unite in order to specify the nature of the gaze which,
in turn, refers to these elements and is described by them. The gaze is one of the marvels,
methods of presenting the figure. It contains a fragment of the portrayed figure, of this
SOMEONE we are inquiring about. The girl with chrysanthemums is helpless in her being
beset. She is not merely a person holding flowers, or merely a child. Her identity protects
itself from being somebody else rather than just herself. Her gaze is the necessary and
most important element of this protection.