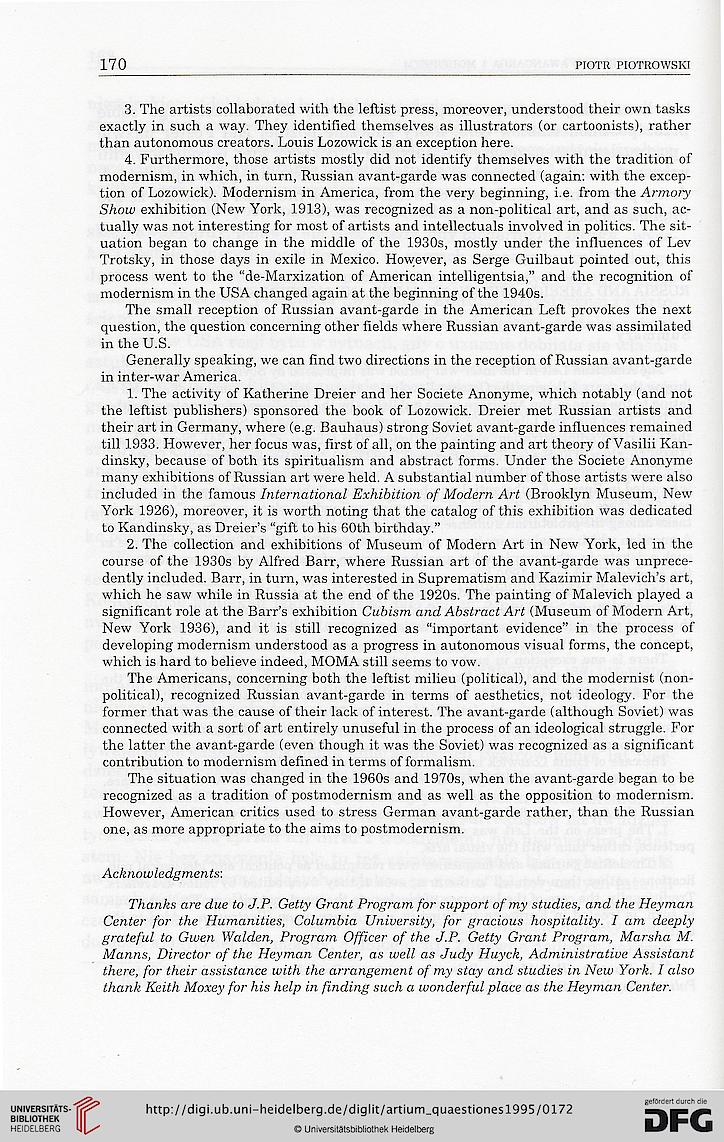 3. The artists collaborated with the leftist press, moreover, understood their own tasks
exactly in such a way. They identified themselves as illustrators (or cartoonists), rather
than autonomous creators. Louis Lozowick is an exception here.
4. Furthermore, those artists mostly did not identify themselves with the tradition of
modernism, in which, in turn, Russian avant-garde was connected (again: with the excep-
tion of Lozowick). Modernism in America, from the very beginning, i.e. from the Armory
Show exhibition (New York, 1913), was recognized as a non-political art, and as such, ac-
tually was not interesting for most of artists and intellectuals involved in politics. The sit-
uation began to change in the middle of the 1930s, mostly under the influences of Lev
Trotsky, in those days in exile in Mexico. However, as Serge Guilbaut pointed out, this
process went to the “de-Marxization of American intelligentsia,” and the recognition of
modernism in the USA changed again at the beginning of the 1940s.
The small reception of Russian avant-garde in the American Left provokes the next
question, the question concerning other fields where Russian avant-garde was assimilated
in the U.S.
Generally speaking, we can find two directions in the reception of Russian avant-garde
in inter-war America.
1. The activity of Katherine Dreier and her Société Anonyme, which notably (and not
the leftist publishers) sponsored the book of Lozowick. Dreier met Russian artists and
their art in Germany, where (e.g. Bauhaus) strong Soviet avant-garde influences remained
till 1933. However, her focus was, first of all, on the painting and art theory of Vasilii Kan-
dinsky, because of both its spiritualism and abstract forms. Under the Société Anonyme
many exhibitions of Russian art were held. A substantial number of those artists were also
included in the famous International Exhibition of Modern Art (Brooklyn Museum, New
York 1926), moreover, it is worth noting that the catalog of this exhibition was dedicated
to Kandinsky, as Dreier’s “gift to his 60th birthday.”
2. The collection and exhibitions of Museum of Modern Art in New York, led in the
course of the 1930s by Alfred Barr, where Russian art of the avant-garde was unprece-
dently included. Barr, in turn, was interested in Suprematism and Kazimir Malevich’s art,
which he saw while in Russia at the end of the 1920s. The painting of Malevich played a
significant role at the Barr’s exhibition Cubism and Abstract Art (Museum of Modern Art,
New York 1936), and it is still recognized as “important evidence” in the process of
developing modernism understood as a progress in autonomous visual forms, the concept,
which is hard to believe indeed, MOMA still seems to vow.
The Americans, concerning both the leftist milieu (political), and the modernist (non-
political), recognized Russian avant-garde in terms of aesthetics, not ideology. For the
former that was the cause of their lack of interest. The avant-garde (although Soviet) was
connected with a sort of art entirely unuseful in the process of an ideological struggle. For
the latter the avant-garde (even though it was the Soviet) was recognized as a significant
contribution to modernism defined in terms of formalism.
The situation was changed in the 1960s and 1970s, when the avant-garde began to be
recognized as a tradition of postmodernism and as well as the opposition to modernism.
However, American critics used to stress German avant-garde rather, than the Russian
one, as more appropriate to the aims to postmodernism.

Acknowledgments:
Thanks are due to J.P. Getty Grant Program for support of my studies, and the Hey man
Center for the Humanities, Columbia University, for gracious hospitality. I am deeply
grateful to Gwen Walden, Program Officer of the J.P. Getty Grant Program, Marsha M.
Manns, Director of the Heyman Center, as well as Judy Huyck, Administrative Assistant
there, for their assistance with the arrangement of my stay and studies in New York. I also
thank Keith Moxey for his help in finding such a wonderful place as the Heyman Center.