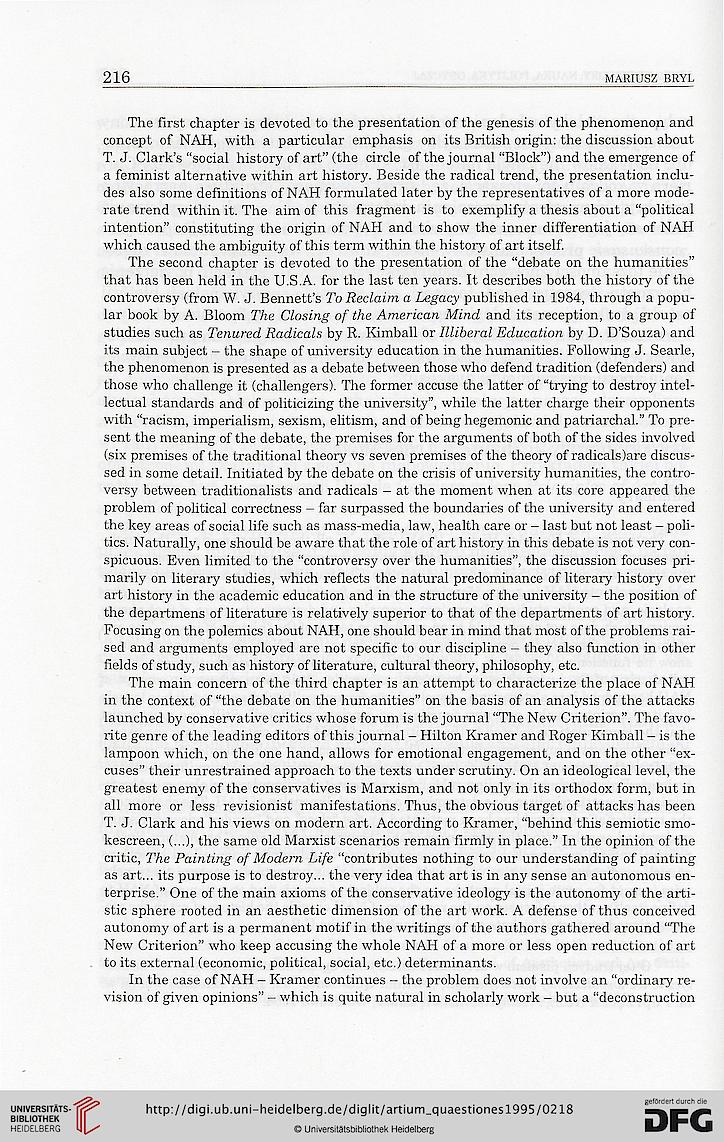 The first chapter is devoted to the presentation of the genesis of the phenomenon and
concept of NAH, with a particular emphasis on its British origin: the discussion about
T. J. Clark’s “social history of art” (the circle of the journal “Block”) and the emergence of
a feminist alternative within art history. Beside the radical trend, the presentation inclu-
des also some definitions of NAH formulated later by the representatives of a more mode-
rate trend within it. The aim of this fragment is to exemplify a thesis about a “political
intention” constituting the origin of NAH and to show the inner differentiation of NAH
which caused the ambiguity of this term within the history of art itself.
The second chapter is devoted to the presentation of the “debate on the humanities”
that has been held in the U.S.A. for the last ten years. It describes both the history of the
controversy (from W. J. Bennett’s To Reclaim a Legacy published in 1984, through a popu-
lar book by A. Bloom The Closing of the American Mind and its reception, to a group of
studies such as Tenured Radicals by R. Kimball or Illiberal Education by D. D’Souza) and
its main subject - the shape of university education in the humanities. Following J. Searle,
the phenomenon is presented as a debate between those who defend tradition (defenders) and
those who challenge it (challengers). The former accuse the latter of “trying to destroy intel-
lectual standards and of politicizing the university”, while the latter charge their opponents
with “racism, imperialism, sexism, elitism, and of being hegemonic and patriarchal.” To pre-
sent the meaning of the debate, the premises for the arguments of both of the sides involved
(six premises of the traditional theory vs seven premises of the theory of radicals)are discus-
sed in some detail. Initiated by the debate on the crisis of university humanities, the contro-
versy between traditionalists and radicals - at the moment when at its core appeared the
problem of political correctness - far surpassed the boundaries of the university and entered
the key areas of social life such as mass-media, law, health care or - last but not least — poli-
tics. Naturally, one should be aware that the role of art history in this debate is not very con-
spicuous. Even limited to the “controversy over the humanities”, the discussion focuses pri-
marily on literary studies, which reflects the natural predominance of literary history over
art history in the academic education and in the structure of the university - the position of
the departmens of literature is relatively superior to that of the departments of art history.
Focusing on the polemics about NAH, one should bear in mind that most of the problems rai-
sed and arguments employed are not specific to our discipline - they also function in other
fields of study, such as history of literature, cultural theory, philosophy, etc.
The main concern of the third chapter is an attempt to characterize the place of NAH
in the context of “the debate on the humanities” on the basis of an analysis of the attacks
launched by conservative critics whose forum is the journal “The New Criterion”. The favo-
rite genre of the leading editors of this journal - Hilton Kramer and Roger Kimball - is the
lampoon which, on the one hand, allows for emotional engagement, and on the other “ex-
cuses” their unrestrained approach to the texts under scrutiny. On an ideological level, the
greatest enemy of the conservatives is Marxism, and not only in its orthodox form, but in
all more or less revisionist manifestations. Thus, the obvious target of attacks has been
T. J. Clark and his views on modern art. According to Kramer, “behind this semiotic smo-
kescreen, (...), the same old Marxist scenarios remain firmly in place.” In the opinion of the
critic, The Painting of Modern Life “contributes nothing to our understanding of painting
as art... its purpose is to destroy... the very idea that art is in any sense an autonomous en-
terprise.” One of the main axioms of the conservative ideology is the autonomy of the arti-
stic sphere rooted in an aesthetic dimension of the art work. A defense of thus conceived
autonomy of art is a permanent motif in the writings of the authors gathered around “The
New Criterion” who keep accusing the whole NAH of a more or less open reduction of art
to its external (economic, political, social, etc.) determinants.
In the case of NAH - Kramer continues - the problem does not involve an “ordinary re-
vision of given opinions” - which is quite natural in scholarly work - but a “deconstruction