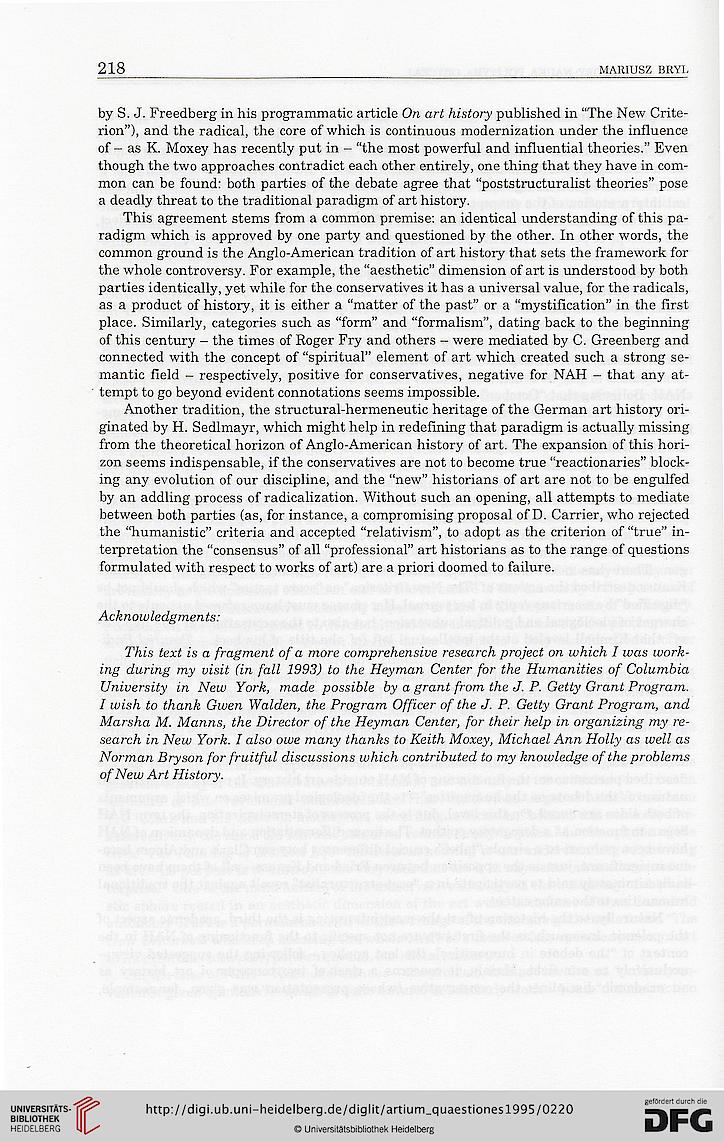 by S. J. Freedberg in his programmatic article On art history published in “The New Crite-
rion”), and the radical, the core of which is continuous modernization under the influence
of - as K. Moxey has recently put in - “the most powerful and influential theories.” Even
though the two approaches contradict each other entirely, one thing that they have in com-
mon can be found: both parties of the debate agree that “poststructuralist theories” pose
a deadly threat to the traditional paradigm of art history.
This agreement stems from a common premise: an identical understanding of this pa-
radigm which is approved by one party and questioned by the other. In other words, the
common ground is the Anglo-American tradition of art history that sets the framework for
the whole controversy. For example, the “aesthetic” dimension of art is understood by both
parties identically, yet while for the conservatives it has a universal value, for the radicals,
as a product of history, it is either a “matter of the past” or a “mystification” in the first
place. Similarly, categories such as “form” and “formalism”, dating back to the beginning
of this century - the times of Roger Fry and others - were mediated by C. Greenberg and
connected with the concept of “spiritual” element of art which created such a strong se-
mantic field - respectively, positive for conservatives, negative for NAH - that any at-
tempt to go beyond evident connotations seems impossible.
Another tradition, the structural-hermeneutic heritage of the German art history ori-
ginated by H. Sedlmayr, which might help in redefining that paradigm is actually missing
from the theoretical horizon of Anglo-American history of art. The expansion of this hori-
zon seems indispensable, if the conservatives are not to become true “reactionaries” block-
ing any evolution of our discipline, and the “new” historians of art are not to be engulfed
by an addling process of radicalization. Without such an opening, all attempts to mediate
between both parties (as, for instance, a compromising proposal of D. Carrier, who rejected
the “humanistic” criteria and accepted “relativism”, to adopt as the criterion of “true” in-
terpretation the “consensus” of all “professional” art historians as to the range of questions
formulated with respect to works of art) are a priori doomed to failure.

Acknowledgments:
This text is a fragment of a more comprehensive research project on which I was work-
ing during my visit (in fall 1993) to the Heyman Center for the Humanities of Columbia
University in New York, made possible by a grant from the J. P. Getty Grant Program.
I wish to thank Gwen Walden, the Program Officer of the J. P. Getty Grant Program, and
Marsha M. Manns, the Director of the Heyman Center, for their help in organizing my re-
search in New York. I also owe many thanks to Keith Moxey, Michael Ann Holly as well as
Norman Bryson for fruitful discussions which contributed to my knowledge of the problems
of New Art History.