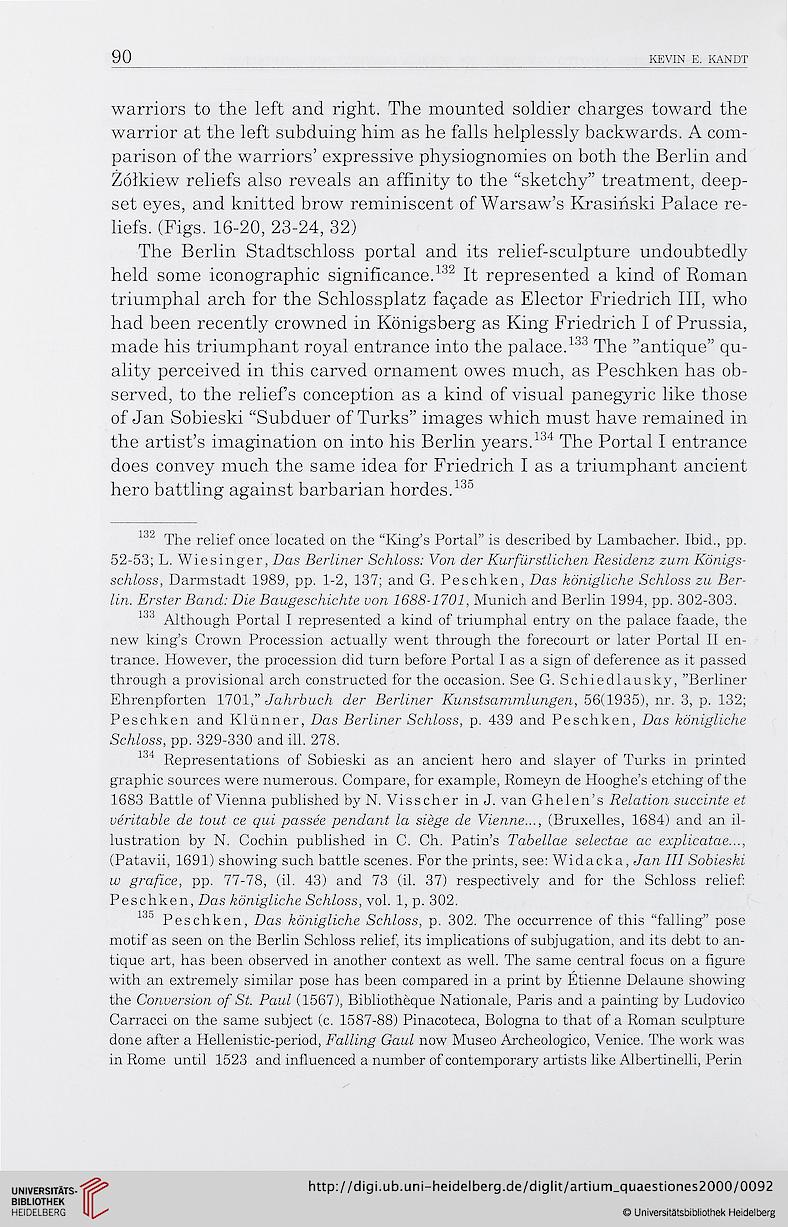 warriors to the left and right. The mounted soldier charges toward the
warrior at the left subduing him as he faits helplessly backwards. A com-
parison of the warriors’ expressive physiognomies on both the Berlin and
Zôlkiew reliefs also reveals an affmity to the “sketchy” treatment, deep-
set eyes, and knitted brow reminiscent of Warsaw’s Krasinski Palace re-
liefs. (Figs. 16-20, 23-24, 32)

The Berlin Stadtschloss portai and its relief-sculpture undoubtedly
held some iconographie signifïcance.132 It represented a kind of Roman
triumphal arch for the Schlossplatz façade as Elector Friedrich III, who
had been recently crowned in Konigsberg as King Friedrich I of Prussia,
made his triumphant royal entrance into the palace.133 The "antique” qu-
ality perceived in this carved ornament owes much, as Peschken has ob-
served, to the relief s conception as a kind of visual panegyric like those
of Jan Sobieski “Subduer of Turks” images which must hâve remained in
the artist’s imagination on into his Berlin years.134 The Portai I entrance
does convey much the same idea for Friedrich I as a triumphant ancient
hero battling against barbarian hordes.135

133 Although Portai I represented a kind of triumphal entry on the palace faade, the
new king’s Crown Procession actually went through the forecourt or later Portai II en-
trance. However, the procession did turn before Portai I as a sign of deference as it passed
through a provisional arch constructed for the occasion. See G. Schiedlausky, "Berliner
Ehrenpforten 1701Jahrbuch der Berliner Kunstsammlungen, 56(1935), nr. 3, p. 132;
Peschken and Klünner, Das Berliner Schloss, p. 439 and Peschken, Das konigliche
Schloss, pp. 329-330 and ill. 278.

135 Peschken, Das konigliche Schloss, p. 302. The occurrence of this “falling” pose
motif as seen on the Berlin Schloss relief, its implications of subjugation, and its debt to an-
tique art, has been observed in another context as well. The same central focus on a figure
with an extremely similar pose has been compared in a print by Etienne Delaune showing
the Conversion of St. Paul (1567), Bibliothèque Nationale, Paris and a painting by Ludovico
Carracci on the same subject (c. 1587-88) Pinacoteca, Bologna to that of a Roman sculpture
done after a Hellenistic-period, Falling Gaul now Museo Archeologico, Venice. The work was
in Rome until 1523 and influenced a nurnber of contemporary artists like Albertinelli, Perin