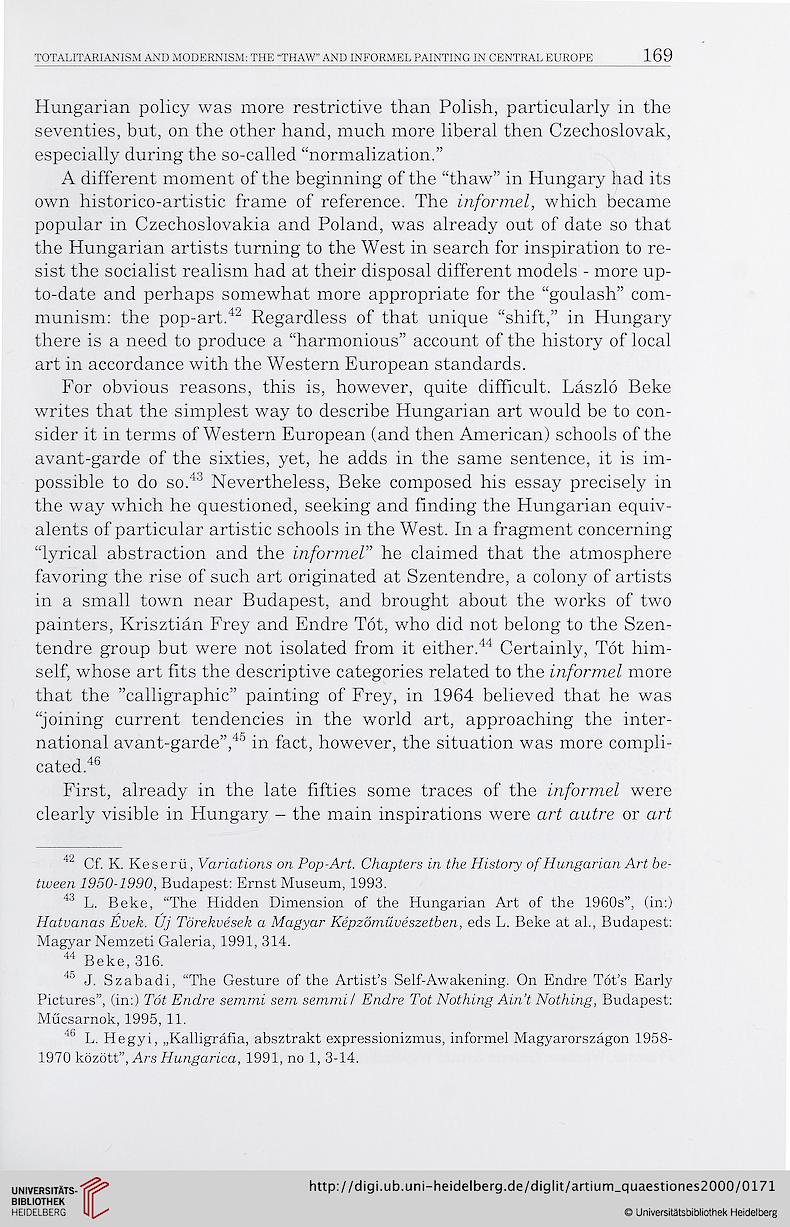 Hungarian policy was more restrictive than Polish, particularly in the
seventies, but, on the other hand, much more liberal then Czechoslovak,
especially during the so-called “normalization.”

A different moment of the beginning of the “thaw” in Hungary had its
own historico-artistic frame of reference. The informel, which became
popular in Czechoslovakia and Poland, was already out of date so that
the Hungarian artists turning to the West in search for inspiration to re-
sist the socialist realism had at their disposai different models - more up-
to-date and perhaps somewhat more appropriate for the “goulash” com-
munism: the pop-art.42 Regardless of that unique “shift,” in Hungary
there is a need to produce a “harmonious” account of the history of local
art in accordance with the Western European standards.

For obvious reasons, this is, however, quite diffîcult. Laszlo Beke
writes that the simplest way to describe Hungarian art would be to con-
sider it in terms of Western European (and then American) schools of the
avant-garde of the sixties, yet, he adds in the same sentence, it is im-
possible to do so.43 Nevertheless, Beke composed his essay precisely in
the way which he questioned, seeking and finding the Hungarian équiv-
alents of particular artistic schools in the West. In a fragment concerning
“lyrical abstraction and the informer he claimed that the atmosphère
favoring the rise of such art originated at Szentendre, a colony of artists
in a small town near Budapest, and brought about the works of two
painters, Krisztiân Frey and Endre Tôt, who did not belong to the Szen-
tendre group but were not isolated from it either.44 * Certainly, Tôt him-
self, whose art fits the descriptive categories related to the informel more
that the "calligraphie” painting of Frey, in 1964 believed that he was
“joining current tendencies in the world art, approaching the inter-
national avant-garde”,40 in fact, however, the situation was more compli-
cated.46

First, already in the late fifties some traces of the informel were
clearly visible in Hungary - the main inspirations were art autre or art