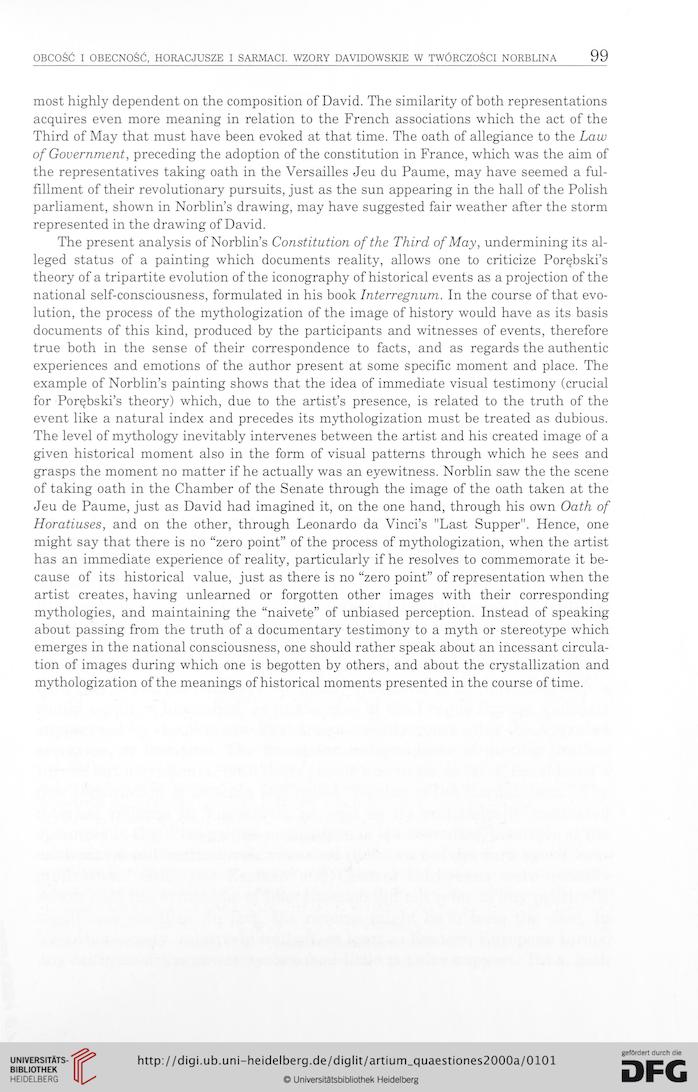 most highly dependent on the composition of David. The similarity of both representations
acąuires even morę meaning in relation to the French associations which the act of the
Third of May that must have been evoked at that time. The oath of allegiance to the Law
of Gouernment, preceding the adoption of the constitution in France, which was the aim of
the representatives taking oath in the Versailles Jeu du Paume, may have seemed a ful-
fiłlment of their revolutionary pursuits, just as the sun appearing in the hall of the Polish
parliament, shown in Norblin’s drawing, may have suggested fair weather after the storm
represented in the drawing of David.
The present analysis of Norblin’s Constitution ofthe Third ofMay, undermining its al-
leged status of a painting which documents reality, allows one to criticize Porębskfs
theory of a tripartite evolution of the iconography of historical events as a projection of the
national self-consciousness, formulated in his book Interregnum. In the course of that evo-
lution, the process of the mythologization of the image of history would have as its basis
documents of this kind, produced by the participants and witnesses of events, therefore
true both in the sense of their correspondence to facts, and as regards the authentic
experiences and emotions of the author present at some specific moment and place. The
example of Norblin’s painting shows that the idea of immediate visual testimony (crucial
for Porębskfs theory) which, due to the artisfs presence, is related to the truth of the
event like a natural index and precedes its mythologization must be treated as dubious.
The level of mythology inevitably intervenes between the artist and his created image of a
given historical moment also in the form of visual pattems through which he sees and
grasps the moment no matter if he actually was an eyewitness. Norblin saw the the scene
of taking oath in the Chamber of the Senate through the image of the oath taken at the
Jeu de Paume, just as David had imagined it, on the one hand, through his own Oath of
Horatiuses, and on the other, through Leonardo da Vinci’s "Last Supper". Hence, one
might say that there is no “zero point” of the process of mythologization, when the artist
has an immediate experience of reality, particularly if he resolves to commemorate it be-
cause of its historical value, just as there is no “zero point” of representation when the
artist creates, having unlearned or forgotten other images with their corresponding
mythologies, and maintaining the “naivetę” of unbiased perception. Instead of speaking
about passing from the truth of a documentary testimony to a myth or stereotype which
emerges in the national consciousness, one should rather speak about an incessant circula-
tion of images during which one is begotten by others, and about the crystallization and
mythologization of the meanings of historical moments presented in the course of time.