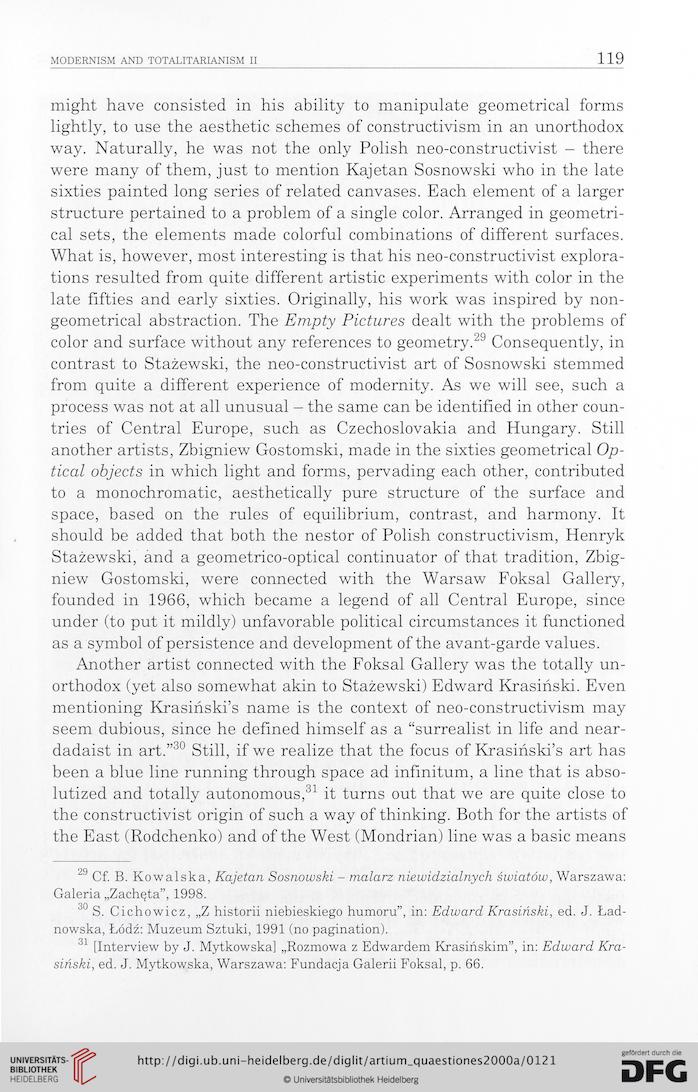 might have consisted in his ability to manipulate geometrical forms
lightly, to use the aesthetic schemes of constructivism in an unorthodox
way. Naturally, he was not the only Polish neo-constructivist - there
were many of them, just to mention Kajetan Sosnowski who in the late
sixties painted long series of related canvases. Each element of a larger
structure pertained to a problem of a single color. Arranged in geometri-
cal sets, the elements madę colorful combinations of different surfaces.
What is, however, most interesting is that his neo-constructivist explora-
tions resulted from ąuite different artistic experiments with color in the
late fifties and early sixties. Originally, his work was inspired by non-
geometrical abstraction. The Empty Pictures dealt with the problems of
color and surface without any references to geometry.29 Conseąuently, in
contrast to Stażewski, the neo-constructivist art of Sosnowski stemmed
from ąuite a different experience of modernity. As we will see, such a
process was not at all unusual - the same can be identified in other coun-
tries of Central Europę, such as Czechoslovakia and Hungary. Still
another artists, Zbigniew Gostomski, madę in the sixties geometrical Op-
tical objects in which light and forms, pervading each other, contributed
to a monochromatic, aesthetically pure structure of the surface and
space, based on the rules of eąuilibrium, contrast, and harmony. It
should be added that both the nestor of Polish constructivism, Henryk
Stażewski, and a geometrico-optical continuator of that tradition, Zbig-
niew Gostomski, were connected with the Warsaw Foksal Gallery,
founded in 1966, which became a legend of all Central Europę, sińce
under (to put it mildly) unfavorable political circumstances it functioned
as a symbol of persistence and development of the avant-garde values.
Another artist connected with the Foksal Gallery was the totally un-
orthodox (yet also somewhat akin to Stażewski) Edward Krasiński. Even
mentioning Krasińskfs name is the context of neo-constructivism may
seem dubious, sińce he defined himself as a “surrealist in life and near-
dadaist in art.”30 Still, if we realize that the focus of Krasiński’s art has
been a blue linę running through space ad infinitum, a linę that is abso-
lutized and totally autonomous,31 it turns out that we are ąuite close to
the constructivist origin of such a way of thinking. Both for the artists of
the East (Rodchenko) and of the West (Mondrian) linę was a basie means
29 Cf. B. Kowalska, Kajetan Sosnowski - malarz niewidzialnych światów, Warszawa:
Galeria „Zachęta”, 1998.
30 S. Cichowicz, „Z historii niebieskiego humoru”, in: Edward Krasiński, ed. J. Ład-
nowska, Łódź: Muzeum Sztuki, 1991 (no pagination).
31 [Interview by J. Mytkowska] „Rozmowa z Edwardem Krasińskim”, in: Edward Kra-
siński, ed. J. Mytkowska, Warszawa: Fundacja Galerii Foksal, p. 66.