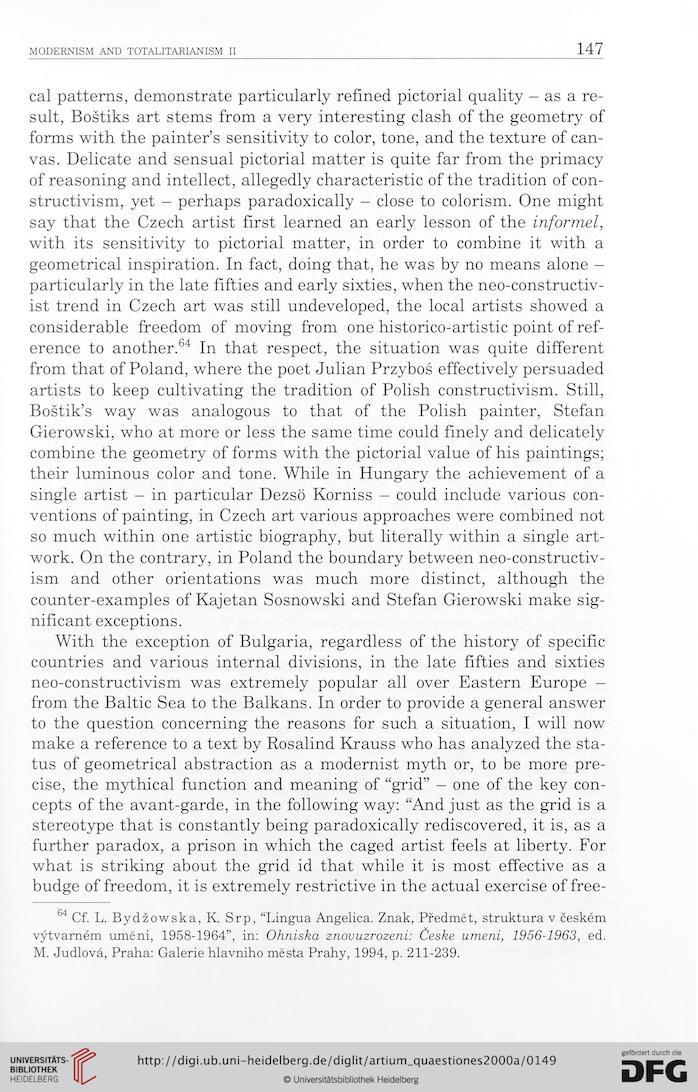 cal patterns, demonstrate particularly refined pictorial ąuality - as a re-
sult, Bośtiks art stems from a very interesting clash of the geometry of
forms with the painter’s sensitivity to color, tonę, and the texture of can-
vas. Delicate and sensual pictorial matter is ąuite far from the primacy
of reasoning and intellect, allegedly characteristic of the tradition of con-
structivism, yet - perhaps paradoxically - close to colorism. One might
say that the Czech artist first learned an early lesson of the informel,
with its sensitivity to pictorial matter, in order to combine it with a
geometrical inspiration. In fact, doing that, he was by no means alone -
particularly in the late fifties and early sixties, when the neo-constructiv-
ist trend in Czech art was still undeveloped, the local artists showed a
considerable freedom of moving from one historico-artistic point of ref-
erence to another.64 In that respect, the situation was ąuite different
from that of Poland, where the poet Julian Przyboś effectively persuaded
artists to keep cultivating the tradition of Polish constructivism. Still,
Bośtik’s way was analogous to that of the Polish painter, Stefan
Gierowski, who at morę or less the same time could finely and delicately
combine the geometry of forms with the pictorial value of his paintings;
their luminous color and tonę. While in Hungary the achievement of a
single artist - in particular Dezsó Korniss - could include various con-
yentions of painting, in Czech art yarious approaches were combined not
so much within one artistic biography, but literally within a single art-
work. On the contrary, in Poland the boundary between neo-constructiv-
ism and other orientations was much morę distinct, although the
counter-examples of Kajetan Sosnowski and Stefan Gierowski make sig-
nificant exceptions.
With the exception of Bułgaria, regardless of the history of specific
countries and yarious internal divisions, in the late fifties and sixties
neo-constructivism was extremely popular all over Eastern Europę -
from the Baltic Sea to the Balkans. In order to provide a generał answer
to the ąuestion concerning the reasons for such a situation, I will now
make a reference to a text by Rosalind Krauss who has analyzed the sta-
tus of geometrical abstraction as a modernist myth or, to be morę pre-
cise, the mythical function and meaning of “grid” - one of the key con-
cepts of the avant-garde, in the following way: “And just as the grid is a
stereotype that is constantly being paradoxically rediscovered, it is, as a
further paradox, a prison in which the caged artist feels at liberty. For
what is striking about the grid id that while it is most effective as a
budge of freedom, it is extremely restrictive in the actual exercise of free-
64 Cf. L. Bydżowska, K. Srp, “Lingua Angelica. Znak, Predmet, struktura v ćeskem
vytvamem umeni, 1958-1964”, in: Ohniska znovuzrozeni: Ćeske umeni, 1956-1963, ed.
M. Judlova, Praha: Galerie hlavniho mesta Prahy, 1994, p. 211-239.