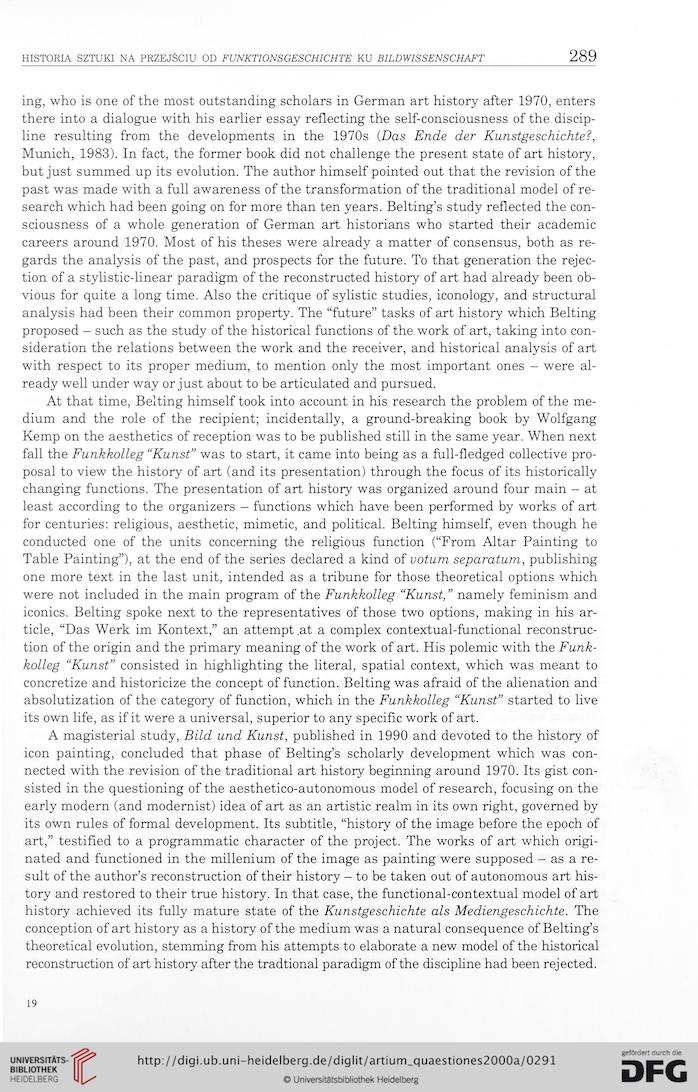 ing, who is one of the most outstanding scholars in German art history after 1970, enters
there into a dialogue with his earlier essay reflecting the self-consciousness of the discip-
line resulting from the developments in the 1970s (Das Ende der Kunstgeschichte?,
Munich, 1983). In fact, the former book did not challenge the present state of art history,
but just summed up its evolution. The author himself pointed out that the revision of the
past was madę with a fuli awareness of the transformation of the traditional model of re-
search which had been going on for morę than ten years. Belting’s study reflected the con-
sciousness of a whole generation of German art historians who started their academic
careers around 1970. Most of his theses were ałready a matter of consensus, both as re-
gards the analysis of the past, and prospects for the futurę. To that generation the rejec-
tion of a stylistic-linear paradigm of the reconstructed history of art had already been ob-
vious for ąuite a long time. Also the critiąue of sylistic studies, iconology, and structural
analysis had been their common property. The “futurę” tasks of art history which Belting
proposed - such as the study of the historical functions of the work of art, taking into con-
sideration the relations between the work and the receiver, and historical analysis of art
with respect to its proper medium, to mention only the most important ones - were al-
ready well under way or just about to be articulated and pursued.
At that time, Belting himself took into account in his research the problem of the me-
dium and the role of the recipient; incidentaiły, a ground-breaking book by Wolfgang
Kemp on the aesthetics of reception was to be published still in the same year. When next
fali the Funkkolleg “Kunst” was to start, it came into being as a full-fledged collective pro-
posal to view the history of art (and its presentation) through the focus of its historically
changing functions. The presentation of art history was organized around four main - at
least according to the organizers - functions which have been performed by works of art
for centuries: religious, aesthetic, mimetic, and political. Belting himself, even though he
conducted one of the units concerning the religious function (“From Altar Painting to
Table Painting”), at the end of the series declared a kind of votum separatum, publishing
one morę text in the łast unit, intended as a tribune for those theoretical options which
were not included in the main program of the Funkkolleg “Kunst,” namely feminism and
iconics. Belting spoke next to the representatives of those two options, making in his ar-
ticle, “Das Werk im Kontext,” an attempt .at a complex contextual-functional reconstruc-
tion of the origin and the primary meaning of the work of art. His polemic with the Funk-
kolleg “Kunst” consisted in highłighting the literał, spatial context, which was meant to
concretize and historicize the concept of function. Belting was afraid of the alienation and
absolutization of the category of function, which in the Funkkolleg “Kunst” started to live
its own life, as if it were a universal, superior to any specific work of art.
A magisteria! study, Bild und Kunst, published in 1990 and devoted to the history of
icon painting, concluded that phase of Belting’s scholarly development which was con-
nected with the revision of the traditional art history beginning around 1970. Its gist con-
sisted in the ąuestioning of the aesthetico-autonomous model of research, focusing on the
early modern (and modemist) idea of art as an artistic realm in its own right, govemed by
its own rules of formal development. Its subtitle, “history of the image before the epoch of
art,” testifled to a programmatic character of the project. The works of art which origi-
nated and functioned in the millenium of the image as painting were supposed - as a re-
sult of the author’s reconstruction of their history - to be taken out of autonomous art his-
tory and restored to their true history. In that case, the functional-contextual model of art
history achieved its fully maturę state of the Kunstgeschichte ais Mediengeschichte. The
conception of art history as a history of the medium was a natural conseąuence of Belting’s
theoretical evolution, stemming from his attempts to elaborate a new model of the historical
reconstruction of art history after the tradtional paradigm of the discipline had been rejected.