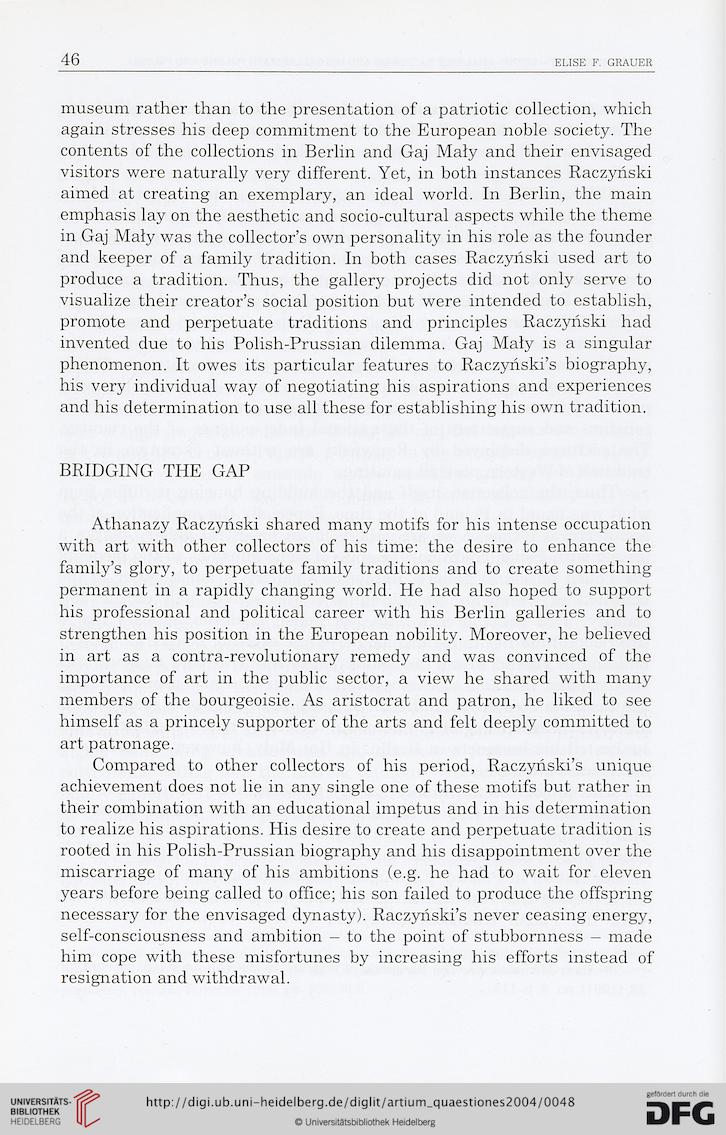 museum rather than to the presentation of a patriotic collection, which
again stresses his deep commitment to the European noble society. The
contents of the collections in Berlin and Gaj Maly and their envisaged
visitors were naturally very different. Yet, in both instances Raczyński
aimed at creating an exemplary, an ideal world. In Berlin, the main
emphasis lay on the aesthetic and socio-cultural aspects while the theme
in Gaj Maly was the collector’s own personality in his role as the founder
and keeper of a family tradition. In both cases Raczyński used art to
produce a tradition. Thus, the gallery projects did not only serve to
visualize their creator’s social position but were intended to establish,
promote and perpetuate traditions and principles Raczyński had
invented due to his Polish-Prussian dilemma. Gaj Maly is a singular
phenomenon. It owes its particular features to Raczyhski’s biography,
his very individual way of negotiating his aspirations and experiences
and his determination to use all these for establishing his own tradition.

Athanazy Raczyński shared many motifs for his intense occupation
with art with other collectors of his time: the desire to enhance the
family’s glory, to perpetuate family traditions and to create something
permanent in a rapidly changing world. He had also hoped to sujoport
his professional and political career with his Berlin galleries and to
strengthen his position in the European nobility. Moreover, he believed
in art as a contra-revolutionary remedy and was convinced of the
importance of art in the public sector, a view he shared with many
members of the bourgeoisie. As aristocrat and patron, he liked to see
himself as a princely supporter of the arts and felt deeply committed to
art patronage.
Compared to other collectors of his period, Raczyirski’s unique
achievement does not lie in any single one of these motifs but rather in
their combination with an educational impetus and in his determination
to realize his aspirations. His desire to create and perpetuate tradition is
rooted in his Polish-Prussian biography and his disappointment over the
miscarriage of many of his ambitions (e.g. he had to wait for eleven
years before being called to office; his son failed to produce the offspring
necessary for the envisaged dynasty). Raczyhski’s never ceasing energy,
self-consciousness and ambition - to the point of stubbornness - made
him cope with these misfortunes by increasing his efforts instead of
resignation and withdrawal.