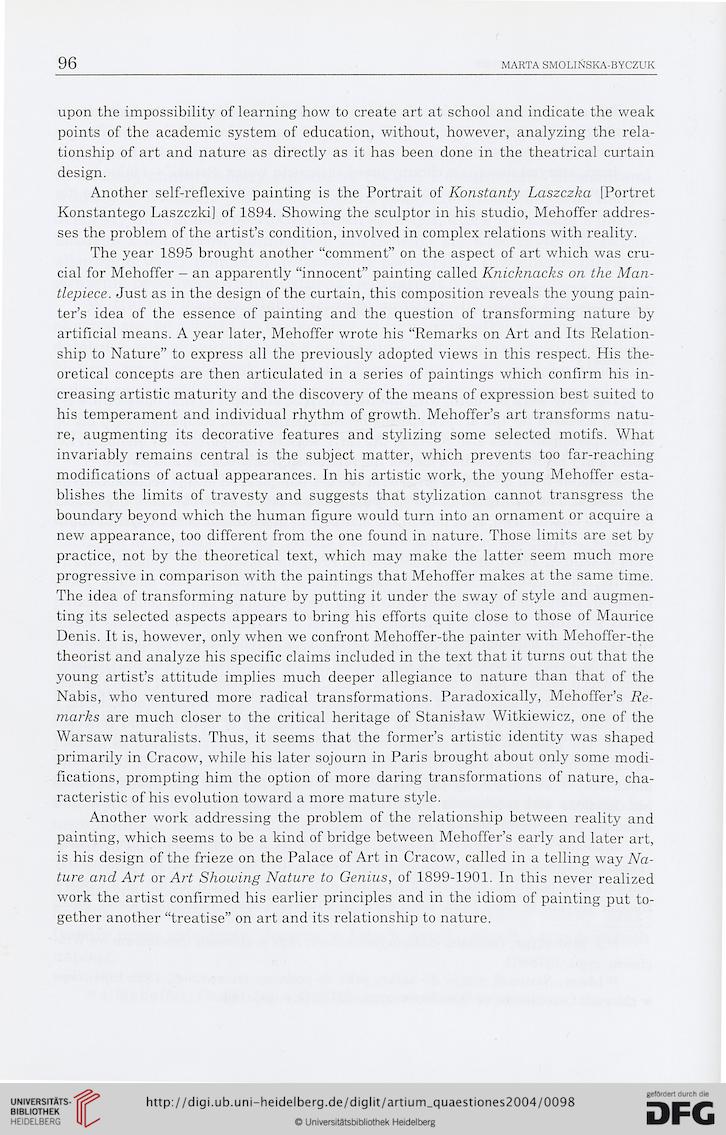 upon the impossibility of learning how to create art at school and indicate the weak
points of the academic system of education, without, however, analyzing the rela-
tionship of art and nature as directly as it has been done in the theatrical curtain
design.
Another self-reflexive painting is the Portrait of Konstanty Laszczka [Portret
Konstantego Laszczki] of 1894. Showing the sculptor in his studio, Mehoffer addres-
ses the problem of the artist’s condition, involved in complex relations with reality.
The year 1895 brought another “comment” on the aspect of art which was cru-
cial for Mehoffer - an apparently “innocent” painting called Knicknacks on the Man-
tlepiece. Just as in the design of the curtain, this composition reveals the young pain-
ter’s idea of the essence of painting and the question of transforming nature by
artificial means. A year later, Mehoffer wrote his “Remarks on Art and Its Relation-
ship to Nature” to express all the previously adopted views in this respect. His the-
oretical concepts are then articulated in a series of paintings which confirm his in-
creasing artistic maturity and the discovery of the means of expression best suited to
his temperament and individual rhythm of growth. Mehoffer’s art transforms natu-
re, augmenting its decorative features and stylizing some selected motifs. What
invariably remains central is the subject matter, which prevents too far-reaching
modifications of actual appearances. In his artistic work, the young Mehoffer esta-
blishes the limits of travesty and suggests that stylization cannot transgress the
boundary beyond which the human figure would turn into an ornament or acquire a
new appearance, too different from the one found in nature. Those limits are set by
practice, not by the theoretical text, which may make the latter seem much more
progressive in comparison with the paintings that Mehoffer makes at the same time.
The idea of transforming nature by putting it under the sway of style and augmen-
ting its selected aspects appears to bring his efforts quite close to those of Maurice
Denis. It is, however, only when we confront Mehoffer-the painter with Mehoffer-the
theorist and analyze his specific claims included in the text that it turns out that the
young artist’s attitude implies much deeper allegiance to nature than that of the
Nabis, who ventured more radical transformations. Paradoxically, Mehoffer’s Re-
marks are much closer to the critical heritage of Stanisław Witkiewicz, one of the
Warsaw naturalists. Thus, it seems that the former’s artistic identity was shaped
primarily in Cracow, while his later sojourn in Paris brought about only some modi-
fications, prompting him the option of more daring transformations of nature, cha-
racteristic of his evolution toward a more mature style.
Another work addressing the problem of the relationship between reality and
painting, which seems to be a kind of bridge between Mehoffer’s early and later art,
is his design of the frieze on the Palace of Art in Cracow, called in a telling way Na-
ture and Art or Art Showing Nature to Genius, of 1899-1901. In this never realized
work the artist confirmed his earlier principles and in the idiom of painting put to-
gether another “treatise” on art and its relationship to nature.