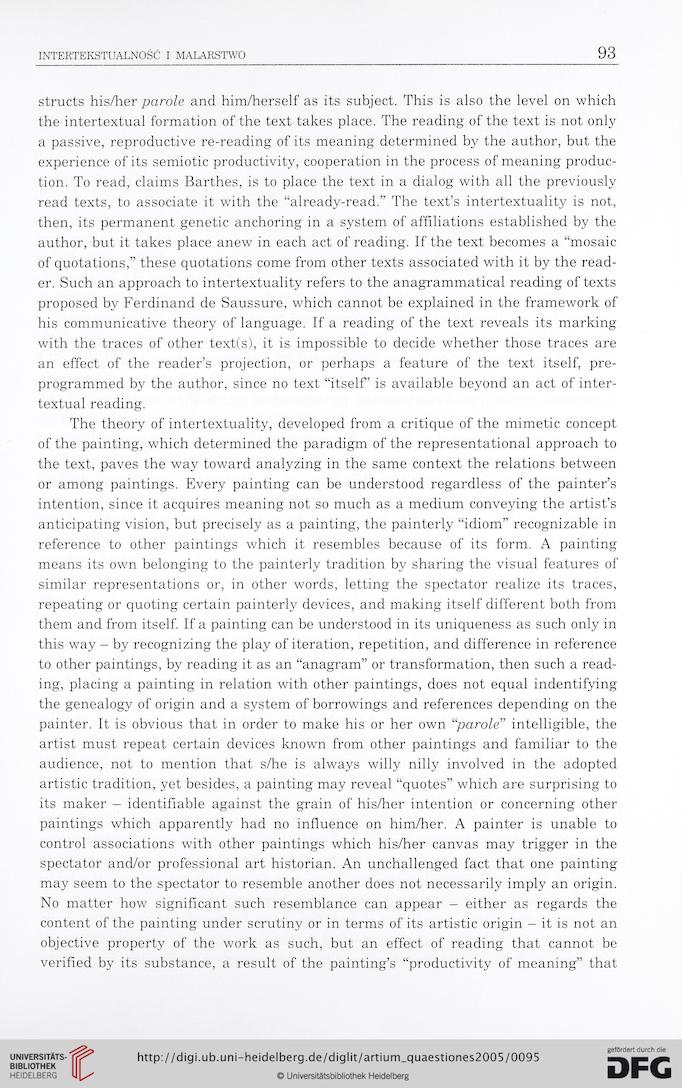 structs his/her parole and him/herself as its subject. This is also the level on which
the intertextual formation of the text takes place. The reading of the text is not only
a passive, reproductive re-reading of its meaning determined by the author, but the
experience of its semiotic productivity, cooperation in the process of meaning produc-
tion. To read, claims Barthes, is to place the text in a dialog with all the previously
read texts, to associate it with the “already-read.” The text’s intertextuality is not,
then, its permanent genetic anchoring in a system of affiliations established by the
author, but it takes place anew in each act of reading. If the text becomes a “mosaic
of ąuotations,” these ąuotations come from other texts associated with it by the read-
er. Such an approach to intertextuality refers to the anagrammatical reading of texts
proposed by Ferdinand de Saussure, which cannot be explained in the framework of
his communicative theory of language. If a reading of the text reveals its marking
with the traces of other text(s), it is impossible to decide whether those traces are
an effect of the readehs projection, or perhaps a feature of the text itself, pre-
programmed by the author, sińce no text “itself’ is available beyond an act of inter-
textual reading.
The theory of intertextuality, developed from a critiąue of the mimetic concept
of the painting, which determined the paradigm of the representational approach to
the text, paves the way toward analyzing in the same context the relations between
or among paintings. Every painting can be understood regardless of the painter’s
intention, sińce it acąuires meaning not so much as a medium conveying the ai'tist’s
anticipating vision, but precisely as a painting, the painterly “idiom” recognizable in
reference to other paintings which it resembles because of its form. A painting
means its own belonging to the painterly tradition by sharing the visual features of
similar representations or, in other words, letting the spectator realize its traces,
repeating or ąuoting certain painterly devices, and making itself different both from
them and from itself. If a painting can be understood in its uniąueness as such only in
this way - by recognizing the play of iteration, repetition, and difference in reference
to other paintings, by reading it as an “anagram” or transformation, then such a read-
ing, placing a painting in relation with other paintings, does not equal indentifying
the genealogy of origin and a system of borrowings and references depending on the
painter. It is obvious that in order to make his or her own “parole” intelligible, the
artist must repeat certain devices known from other paintings and familiar to the
audience, not to mention that s/he is always willy nilly involved in the adopted
artistic tradition, yet besides, a painting may reveal “ąuotes” which are surprising to
its maker - identifiable against the grain of his/her intention or concerning other
paintings which apparently had no influence on him/her. A painter is unable to
control associations with other paintings which his/her canvas may trigger in the
spectator and/or professional art historian. An unchallenged fact that one painting
may seem to the spectator to resemble another does not necessarily imply an origin.
No matter how significant such resemblance can appear - either as regards the
content of the painting under scrutiny or in terms of its artistic origin - it is not an
objective property of the work as such, but an effect of reading that cannot be
verified by its substance, a result of the painting’s “productivity of meaning” that