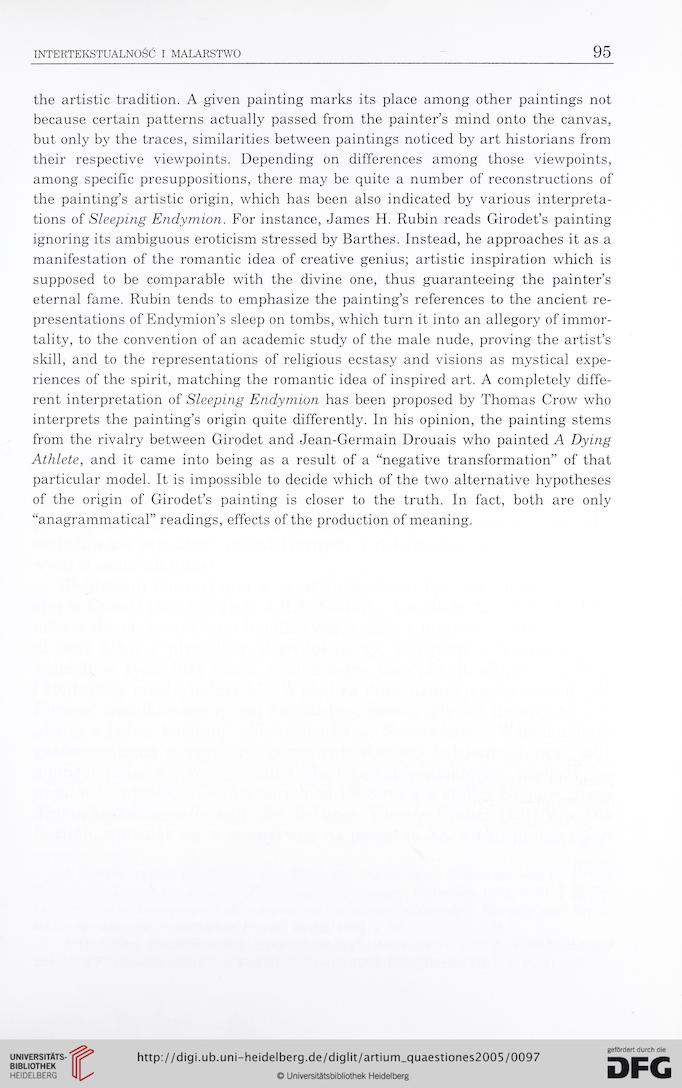 the artistic tradition. A given painting marks its place among other paintings not
because certain patterns actually passed from the painter’s mind onto the canvas,
but only by the traces, similarities between paintings noticed by art historians from
their respective viewpoints. Depending on differences among those viewpoints,
among specific presuppositions, there may be ąuite a number of reconstructions of
the painting’s artistic origin, which has been also indicated by various interpreta-
tions of Sleeping Endymion. For instance, James H. Rubin reads Girodefs painting
ignoring its ambiguous eroticism stressed by Barthes. Instead, he approaches it as a
manifestation of the romantic idea of creative genius; artistic inspiration which is
supposed to be comparable with the divine one, thus guaranteeing the painter’s
eternal famę. Rubin tends to emphasize the painting’s references to the ancient re-
presentations of Endymion’s sleep on tombs, which turn it into an allegory of immor-
tality, to the convention of an academic study of the małe nudę, proving the artisfs
skill, and to the representations of religious ecstasy and visions as mystical expe-
riences of the spirit, matching the romantic idea of inspired art. A completely diffe-
rent interpretation of Sleeping Endymion has been proposed by Thomas Crow who
interprets the painting’s origin ąuite differently. In his opinion, the painting stems
from the rivalry between Girodet and Jean-Germain Drouais who painted A Dying
Athlete, and it came into being as a result of a “negative transformation” of that
particular model. It is impossible to dęci de which of the two alternative hypotheses
of the origin of Girodefs painting is closer to the truth. In fact, both are only
“anagrammatical” readings, effects of the production of meaning.