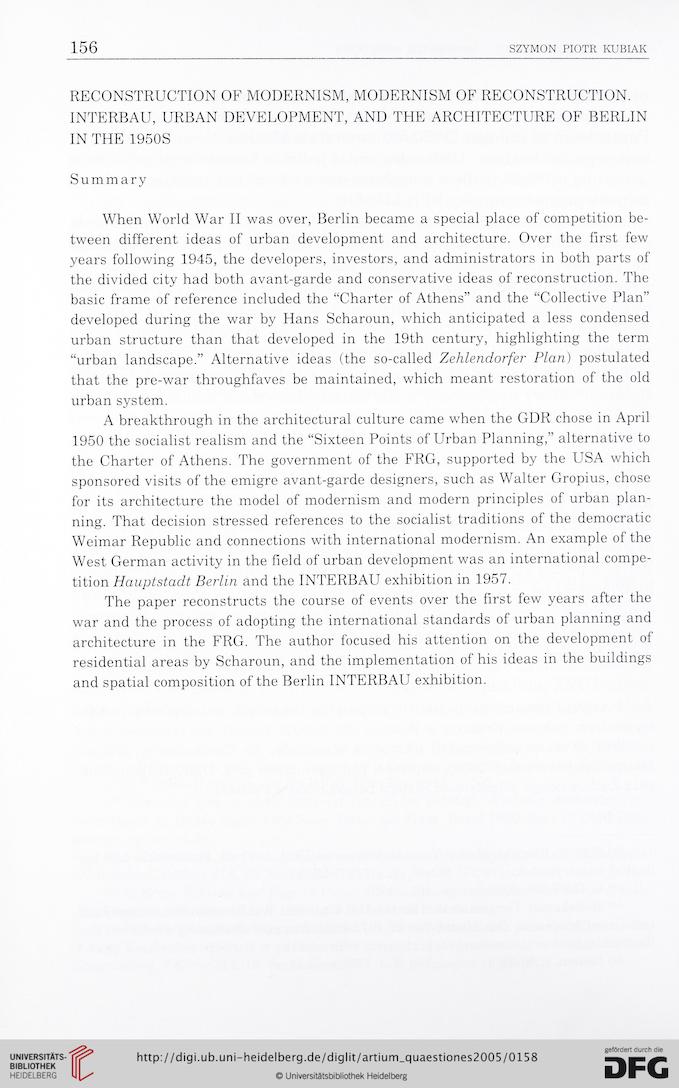 RECONSTRUCTION OF MODERNISM, MODERNISM OF RECONSTRUCTION.
INTERBAU, URBAN DEVELOPMENT, AND THE ARCHITECTURE OF BERLIN
IN THE 1950S
Summary
When World War II was over, Berlin became a special place of competition be-
tween different ideas of urban development and architecture. Over the first few
years following 1945, the developers, investors, and administrators in both parts of
the divided city had both avant-garde and conservative ideas of reconstruction. The
basie frame of reference included the “Charter of Athens” and the “Collective Plan”
developed during the war by Hans Scharoun, which anticipated a less condensed
urban structure than that developed in the 19th century, highlighting the term
“urban landscape.” Alternative ideas (the so-called Zehlendorfer Plan) postulated
that the pre-war throughfaves be maintained, which meant restoration of the old
urban system.
A breakthrough in the architectural culture came when the GDR chose in April
1950 the socialist realism and the “Sixteen Points of Urban Planning,” alternative to
the Charter of Athens. The government of the FRG, supported by the USA which
sponsored visits of the emigre avant-garde designers, such as Walter Gropius, chose
for its architecture the model of modernism and modern principles of urban plan-
ning. That decision stressed references to the socialist traditions of the democratic
Weimar Republic and connections with international modernism. An example of the
West German activity in the field of urban development was an international compe-
tition Hauptstadt Berlin and the INTERBAU exhibition in 1957.
The paper reconstructs the course of events over the first few years after the
war and the process of adopting the international standards of urban planning and
architecture in the FRG. The author focused his attention on the development of
residential areas by Scharoun, and the implementation of his ideas in the buildings
and spatial composition of the Berlin INTERBAU exhibition.