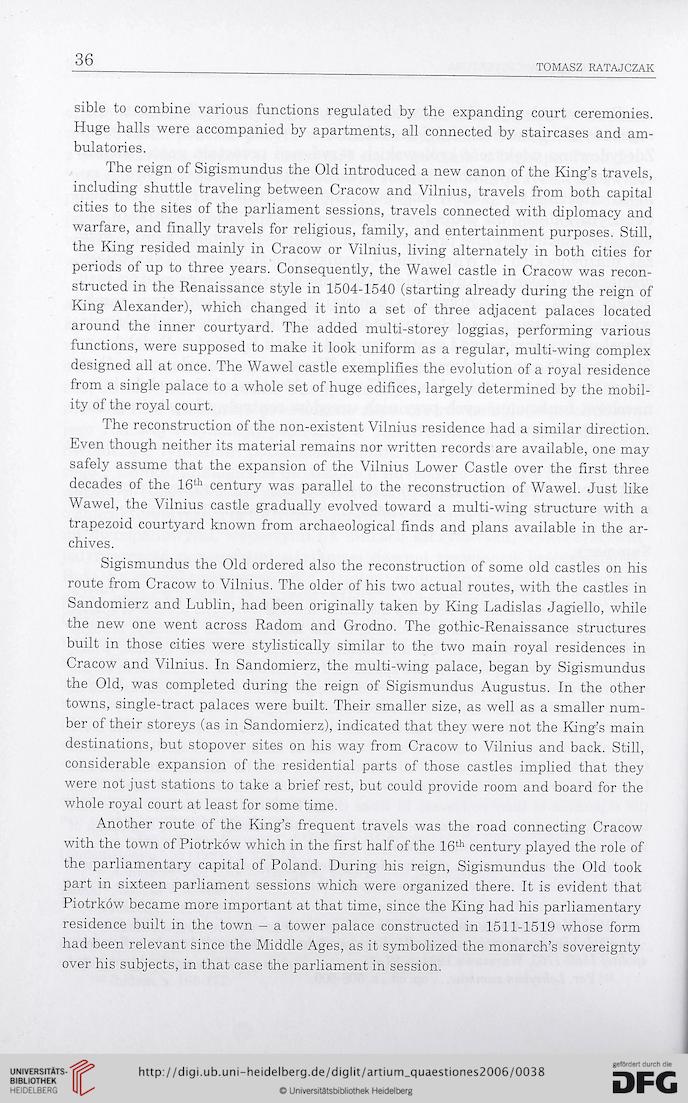 sible to combine various functions regulated by the expanding court ceremonies.
Huge halls were accompanied by apartments, all connected by staircases and am-
bulatories.
The reign of Sigismundus the Old introduced a new canon of the King’s travels,
including shuttle traveling between Cracow and Vilnius, travels from both Capital
cities to the sites of the parliament sessions, travels connected with diplomacy and
warfare, and finally travels for religious, family, and entertainment purposes. Still,
the King resided mainly in Cracow or Vilnius, living alternately in both cities for
periods of up to three years. Conseąuently, the Wawel castle in Cracow was recon-
structed in the Renaissance style in 1504-1540 (starting already during the reign of
King Alexander), which changed it into a set of three adjacent palaces located
around the inner courtyard. The added multi-storey loggias, performing various
functions, were supposed to make it look uniform as a regular, multi-wing complex
designed all at once. The Wawel castle exemplifies the evolution of a royal residence
from a single pałace to a whole set of huge edifices, largely determined by the mobil-
ity of the royal court.
The reconstruction of the non-existent Vilnius residence had a similar direction.
Even though neither its materiał remains nor written records are available, one may
safely assume that the expansion of the Vilnius Lower Castle over the first three
decades of the 16th century was parallel to the reconstruction of Wawel. Just like
Wawel, the Vilnius castle gradually evolved toward a multi-wing structure with a
trapezoid courtyard known from archaeological finds and plans available in the ar-
chives.
Sigismundus the Old ordered also the reconstruction of some old castles on his
route from Cracow to Vilnius. The older of his two actual routes, with the castles in
Sandomierz and Lublin, had been originally taken by King Ladislas Jagiełło, while
the new one went across Radom and Grodno. The gothic-Renaissance structures
built in those cities were stylistically similar to the two main royal residences in
Cracow and Vilnius. In Sandomierz, the multi-wing pałace, began by Sigismundus
the Old, was completed during the reign of Sigismundus Augustus. In the other
towns, single-tract palaces were built. Their smaller size, as well as a smaller num-
ber of their storeys (as in Sandomierz), indicated that they were not the King’s main
destinations, but stopover sites on his way from Cracow to Vilnius and back. Still,
considerable expansion of the residential parts of those castles impłied that they
were not just stations to take a brief rest, but could provide room and board for the
whole royal court at least for some time.
Another route of the King’s freąuent travels was the road connecting Cracow
with the town of Piotrków which in the first half of the 16th century played the role of
the parliamentary Capital of Poland. During his reign, Sigismundus the Old took
part in sixteen parliament sessions which were organized there. It is evident that
Piotrków became morę important at that time, sińce the King had his parliamentary
residence built in the town - a tower pałace constructed in 1511-1519 whose form
had been relevant sińce the Middle Ages, as it symbolized the monarcłTs sovereignty
over his subjects, in that case the parliament in session.