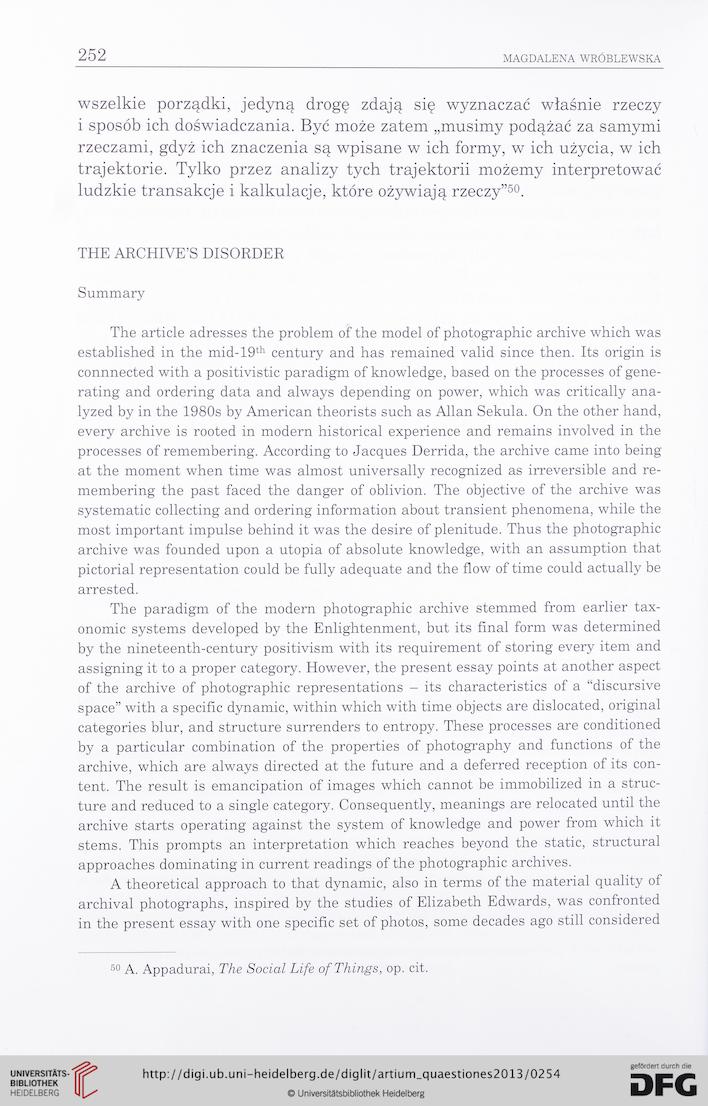 THE ARCHIVE’S DISORDER
Summary
The article adresses the problem of the model of photographic archive which was
established in the mid-19th century and has remained valid since then. Its origin is
connnected with a positivistic paradigm of knowledge, based on the processes of gene-
rating and ordering data and always depending on power, which was critically ana-
lyzed by in the 1980s by American theorists such as Allan Sekuła. On the other hand,
every archive is rooted in modern historical experience and remains involved in the
processes of remembering. According to Jacques Derrida, the archive came into being
at the moment when time was almost universally recognized as irreversible and re-
membering the past faced the danger of oblivion. The objective of the archive was
systematic collecting and ordering information about transient phenomena, while the
most important impulse behind it was the desire of plenitude. Thus the photographic
archive was founded upon a utopia of absolute knowledge, with an assumption that
pictorial representation could be fully adequate and the flow of time could actually be
arrested.
The paradigm of the modern photographic archive stemmed from earlier tax-
onomic systems developed by the Enlightenment, but its final form was determined
by the nineteenth-century positivism with its requirement of storing every item and
assigning it to a proper category. However, the present essay points at another aspect
of the archive of photographic representations - its characteristics of a “discursive
space” with a specific dynamic, within which with time objects are dislocated, original
categories blur, and structure surrenders to entropy. These processes are conditioned
by a particular combination of the properties of photography and functions of the
archive, which are always directed at the future and a deferred reception of its con-
tent. The result is emancipation of images which cannot be immobilized in a struc-
ture and reduced to a single category. Consequently, meanings are relocated until the
archive starts operating against the system of knowledge and power from which it
stems. This prompts an interpretation which reaches beyond the static, structural
approaches dominating in current readings of the photographic archives.
A theoretical approach to that dynamic, also in terms of the material quality of
archival photographs, inspired by the studies of Elizabeth Edwards, was confronted
in the present essay with one specific set of photos, some decades ago still considered