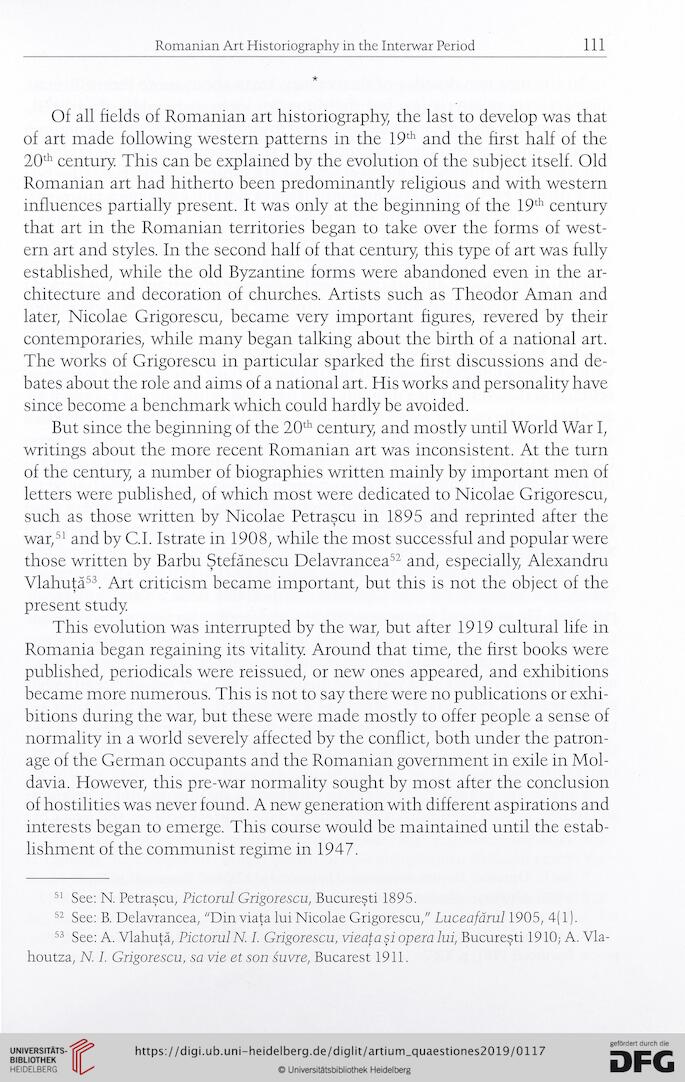 Of all fields of Romanian art historiography the last to develop was that
of art made following western patterns in the 19th and the first half of the
20th century This can be explained by the evolution of the subject itself. Old
Romanian art had hitherto been predominantly religious and with western
influences partially present. It was only at the beginning of the 19th century
that art in the Romanian territories began to take over the forms of west-
ern art and styles. In the second half of that century this type of art was fully
established, while the old Byzantine forms were abandoned even in the ar-
chitecture and decoration of churches. Artists such as Theodor Aman and
later, Nicolae Grigorescu, became very important figures, revered by their
contemporaries, while many began talking about the birth of a national art.
The works of Grigorescu in particular sparked the first discussions and de-
bates about the role and aims of a national art. His works and personality have
since become a benchmark which could hardly be avoided.
But since the beginning of the 20th century, and mostly until World War I,
writings about the more recent Romanian art was inconsistent. At the turn
of the century a number of biographies written mainly by important men of
letters were published, of which most were dedicated to Nicolae Grigorescu,
such as those written by Nicolae Petrascu in 1895 and reprinted after the
war,51 and by C.I. Istrate in 1908, while the most successful and popular were
those written by Barbu Stefänescu Delavrancea52 and, especially Alexandru
Vlahutä53. Art criticism became important, but this is not the object of the
present study.
This evolution was interrupted by the war, but after 1919 cultural life in
Romania began regaining its vitality. Around that time, the first books were
published, periodicals were reissued, or new ones appeared, and exhibitions
became more numerous. This is not to say there were no publications or exhi-
bitions during the war, but these were made mostly to offer people a sense of
normality in a world severely affected by the conflict, both under the patron-
age of the German occupants and the Romanian government in exile in Mol-
davia. However, this pre-war normality sought by most after the conclusion
of hostilities was never found. A new generation with different aspirations and
interests began to emerge. This course would be maintained until the estab-
lishment of the communist regime in 1947.