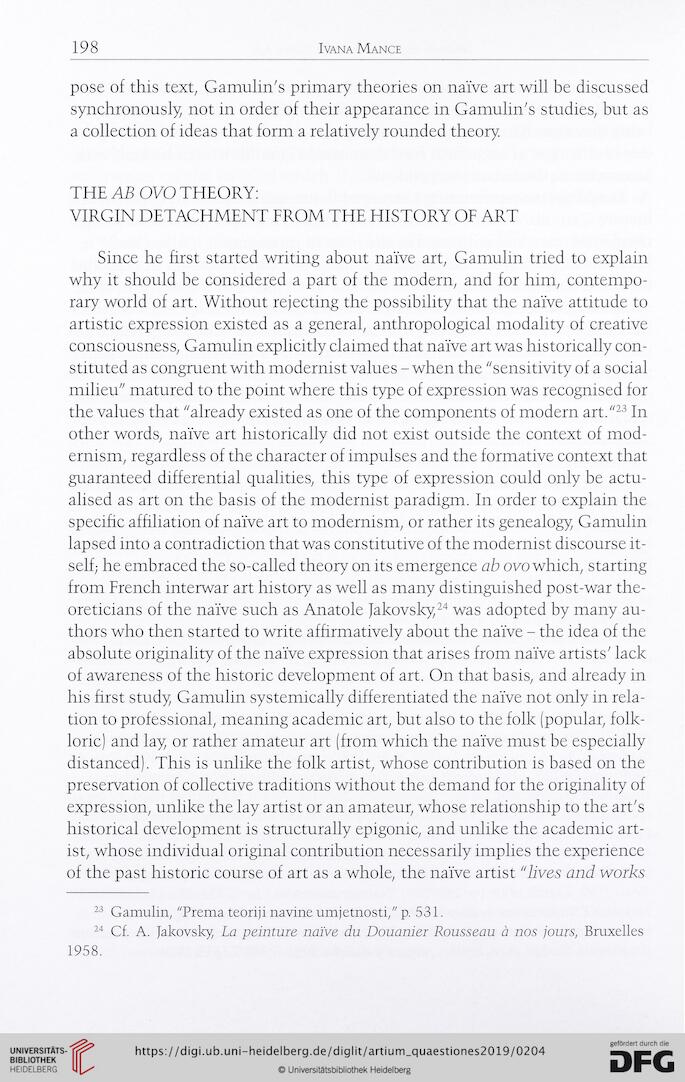 pose of this text, Gamulin's primary theories on naïve art will be discussed
synchronously not in order of their appearance in Gamulin's studies, but as
a collection of ideas that form a relatively rounded theory.
THE AB OVO THEORY:
VIRGIN DETACHMENT FROM THE HISTORY OF ART
Since he Erst started writing about naïve art, Gamulin tried to explain
why it should be considered a part of the modern, and for him, contempo-
rary world of art. Without rejecting the possibility that the naïve attitude to
artistic expression existed as a general, anthropological modality of creative
consciousness, Gamulin explicitly claimed that naïve art was historically con-
stituted as congruent with modernist values - when the "sensitivity of a social
milieu" matured to the point where this type of expression was recognised for
the values that "already existed as one of the components of modern art."23 In
other words, naive art historically did not exist outside the context of mod-
ernism, regardless of the character of impulses and the formative context that
guaranteed differential qualities, this type of expression could only be actu-
alised as art on the basis of the modernist paradigm. In order to explain the
specific affiliation of naïve art to modernism, or rather its genealogy, Gamulin
lapsed into a contradiction that was constitutive of the modernist discourse it-
self; he embraced the so-called theory on its emergence ab ovo which, starting
from French interwar art history as well as many distinguished post-war the-
oreticians of the naïve such as Anatole Jakovsky24 was adopted by many au-
thors who then started to write affirmatively about the naïve - the idea of the
absolute originality of the naïve expression that arises from naïve artists' lack
of awareness of the historic development of art. On that basis, and already in
his Erst study, Gamulin systemically differentiated the naïve not only in rela-
tion to professional, meaning academic art, but also to the folk (popular, folk-
loric) and lay, or rather amateur art (from which the naïve must be especially
distanced). This is unlike the folk artist, whose contribution is based on the
preservation of collective traditions without the demand for the originality of
expression, unlike the lay artist or an amateur, whose relationship to the art's
historical development is structurally epigonie, and unlike the academic art-
ist, whose individual original contribution necessarily implies the experience
of the past historic course of art as a whole, the naïve artist "lives and works
23 Gamulin, 'Trema teoriji navine umjetnosti," p. 531.
24 Cf. A. Jakovsky, La peinture naïve du Douanier Rousseau à nos jours, Bruxelles
1958.