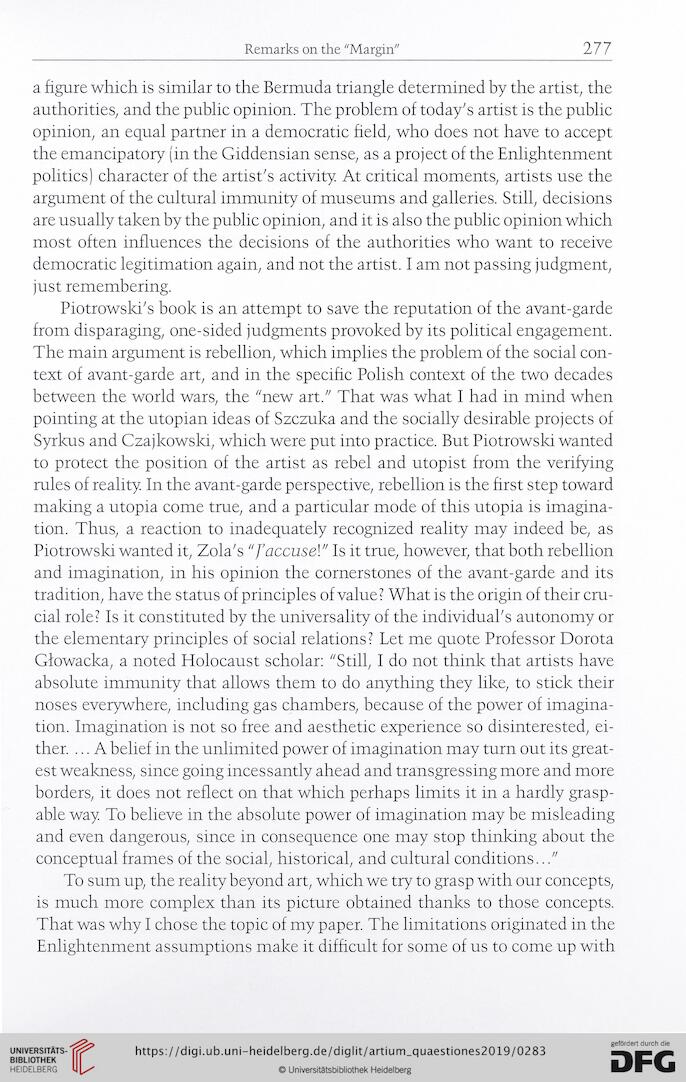 Information about OCR text
Remarks on the "Margin"

a figure which is similar to the Bermuda triangle determined by the artist, the
authorities, and the public opinion. The problem of today's artist is the public
opinion, an equal partner in a democratic held, who does not have to accept
the emancipatory (in the Giddensian sense, as a project of the Enlightenment
politics) character of the artist's activity At critical moments, artists use the
argument of the cultural immunity of museums and galleries. Still, decisions
are usually taken by the public opinion, and it is also the public opinion which
most often influences the decisions of the authorities who want to receive
democratic legitimation again, and not the artist. I am not passing judgment,
just remembering.
Piotrowski's book is an attempt to save the reputation of the avant-garde
from disparaging, one-sided judgments provoked by its political engagement.
The main argument is rebellion, which implies the problem of the social con-
text of avant-garde art, and in the specific Polish context of the two decades
between the world wars, the "new art." That was what I had in mind when
pointing at the utopian ideas of Szczuka and the socially desirable projects of
Syrkus and Czajkowski, which were put into practice. But Piotrowski wanted
to protect the position of the artist as rebel and Utopist from the verifying
rules of reality. In the avant-garde perspective, rebellion is the Erst step toward
making a utopia come true, and a particular mode of this utopia is imagina-
tion. Thus, a reaction to inadequately recognized reality may indeed be, as
Piotrowski wanted it, Zola's "J’accusel" Is it true, however, that both rebellion
and imagination, in his opinion the cornerstones of the avant-garde and its
tradition, have the status of principles of value? What is the origin of their cru-
cial role? Is it constituted by the universality of the individual's autonomy or
the elementary principles of social relations? Let me quote Professor Dorota
Głowacka, a noted Holocaust scholar: "Still, I do not think that artists have
absolute immunity that allows them to do anything they like, to stick their
noses everywhere, including gas chambers, because of the power of imagina-
tion. Imagination is not so free and aesthetic experience so disinterested, ei-
ther. ... A belief in the unlimited power of imagination may turn out its great-
est weakness, since going incessantly ahead and transgressing more and more
borders, it does not reflect on that which perhaps limits it in a hardly grasp-
able way To believe in the absolute power of imagination may be misleading
and even dangerous, since in consequence one may stop thinking about the
conceptual frames of the social, historical, and cultural conditions..."
To sum up, the reality beyond art, which we try to grasp with our concepts,
is much more complex than its picture obtained thanks to those concepts.
That was why I chose the topic of my paper. The limitations originated in the
Enlightenment assumptions make it difficult for some of us to come up with