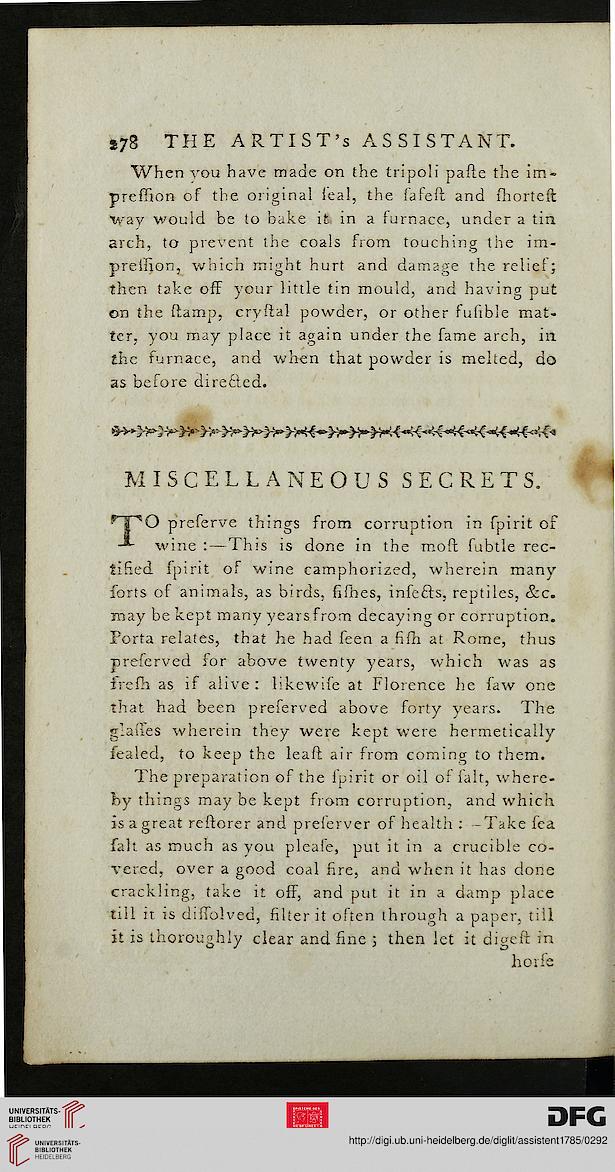 When vou have made on the tripoli pafte the im-
preffion of the original leal, the fafeft and fhorteft
"way would be to bake it in a furnace, under a tin
arch, to prevent the coals from touching the im-
preihon, which might hurt and damage the relief;
then take off your little tin mould, and having put
on the ftamp, cryftal powder, or other fufible mat-
ter, you may place it again under the fame arch, in
the furnace, and when that powder is melted, do
as before directed.

* I prcferve things from corruption in fpirit of
wine : — This is done in the moft fubtle rec-
tified fpirit of wine camphorized, wherein many
forts of animals, as birds, fifhes, infects, reptiles, &c.
may be kept many yearsfrom decaying or corruption.
Porta relates, that he had feen a fifh at Rome, thus
preferved for above twenty years, which was as
irefh as if alive : likewife at Florence he faw one
that had been preferved above forty years. The
gtaues wherein they were kept were hermetically
fealed, to keep the leaft air from coming to them.

The preparation of the fpirit or oil of fait, where-
by things may be kept from corruption, and which
is a great reftorer and prelerver of health : - Take fea
fait as much as you pleafe, put it in a crucible co-
vered, over a good coal fire, and when it has done
crackling, take it off, and put it in a damp place
till it is diffolved, filter it often through a paper, till
it is thoroughly clear and fine 5 then let it digeft in