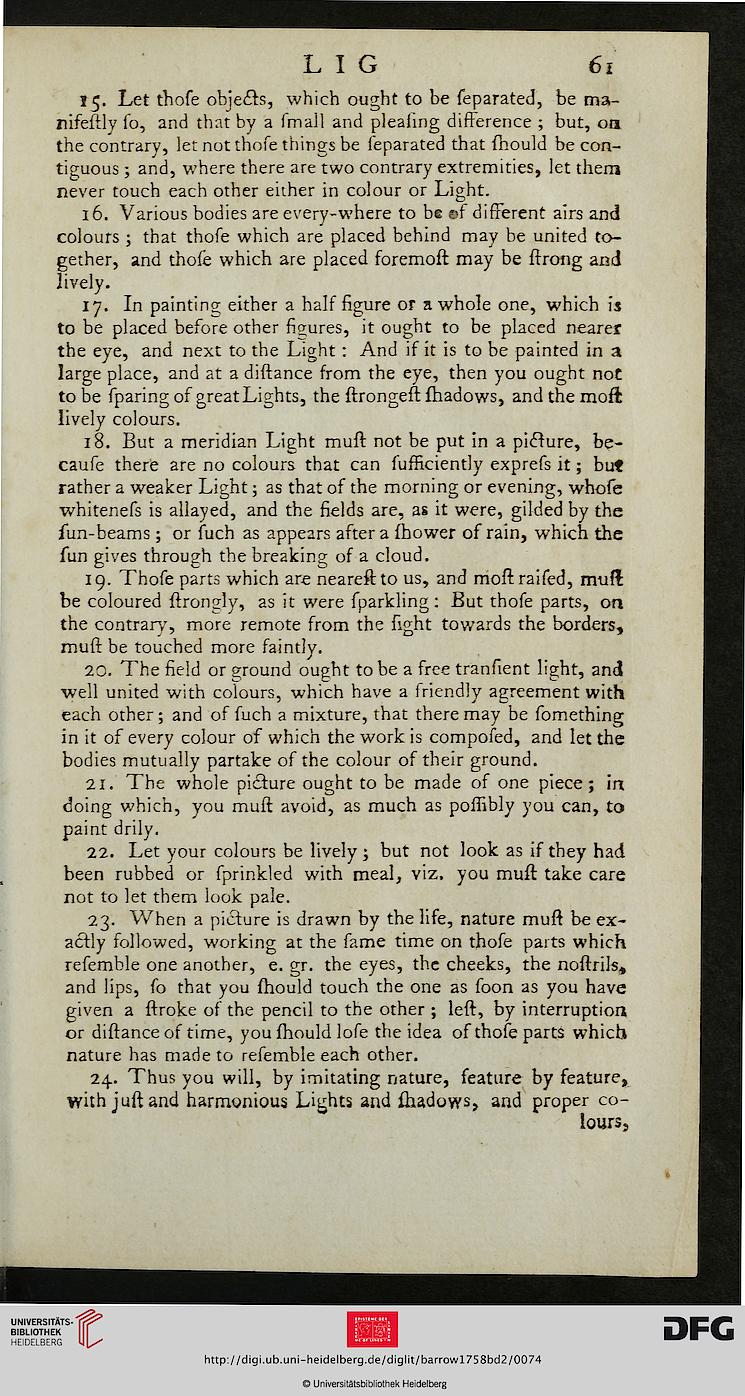 15. Let thofe objects, which ought to be feparated, be ma-
nifestly fo, and that by a fmall and pleaiing difference ; but, oa
the contrary, let not thofe things be feparated that fhould be con-
tiguous ; and, where there are two contrary extremities, let them
never touch each other either in colour or Light.

17. In painting either a half figure or a whole one, which is
to be placed before other figures, it ought to be placed nearer
the eye, and next to the Light : And if it is to be painted in a
large place, and at a diftance from the eye, then you ought not
to be fparing of great Lights, the ftrongeft fhadows, and the moft
lively colours.

18. But a meridian Light muft not be put in a picture, be-
caufe there are no colours that can fufficiently exprefs it; but
rather a weaker Light; as that of the morning or evening, whofe
whitenefs is allayed, and the fields are, as it were, gilded by the
fun-beams; or fuch as appears after a fhower of rain, which the
fun gives through the breaking of a cloud.

19. Thofe parts which are neareftto us, and moftraifed, mufl
be coloured ftrongly, as it were fparkling: But thofe parts, on
the contrary, more remote from the fight towards the borders,
muft be touched more faintly.

20. The field or ground ought to be a free tranfient light, and
well united with colours, which have a friendly agreement with
each other; and of fuch a mixture, that there may be fomething
in it of every colour of which the work is compofed, and let the
bodies mutually partake of the colour of their ground.

21. The whole picture ought to be made of one piece; in
doing which, you muft avoid, as much as poffibly you can, to
paint drily.

22. Let your colours be lively; but not look as if they had
been rubbed or fprinkled with meal, viz. you muft take care
not to let them look pale.

23. When a picture is drawn by the life, nature muft be ex-
actly followed, working at the fame time on thofe parts which
refemble one another, e. gr. the eyes, the cheeks, the noftrils,
and lips, fo that you fhould touch the one as foon as you have
given a ftroke of the pencil to the other; left, by interruption
or diftance of time, you fhould lofe the idea of thofe parts which
nature has made to refemble each other.

24. Thus you will, by imitating nature, feature by feature,
with juft and harmonious Lights and ftiadows, and proper co-
lours,