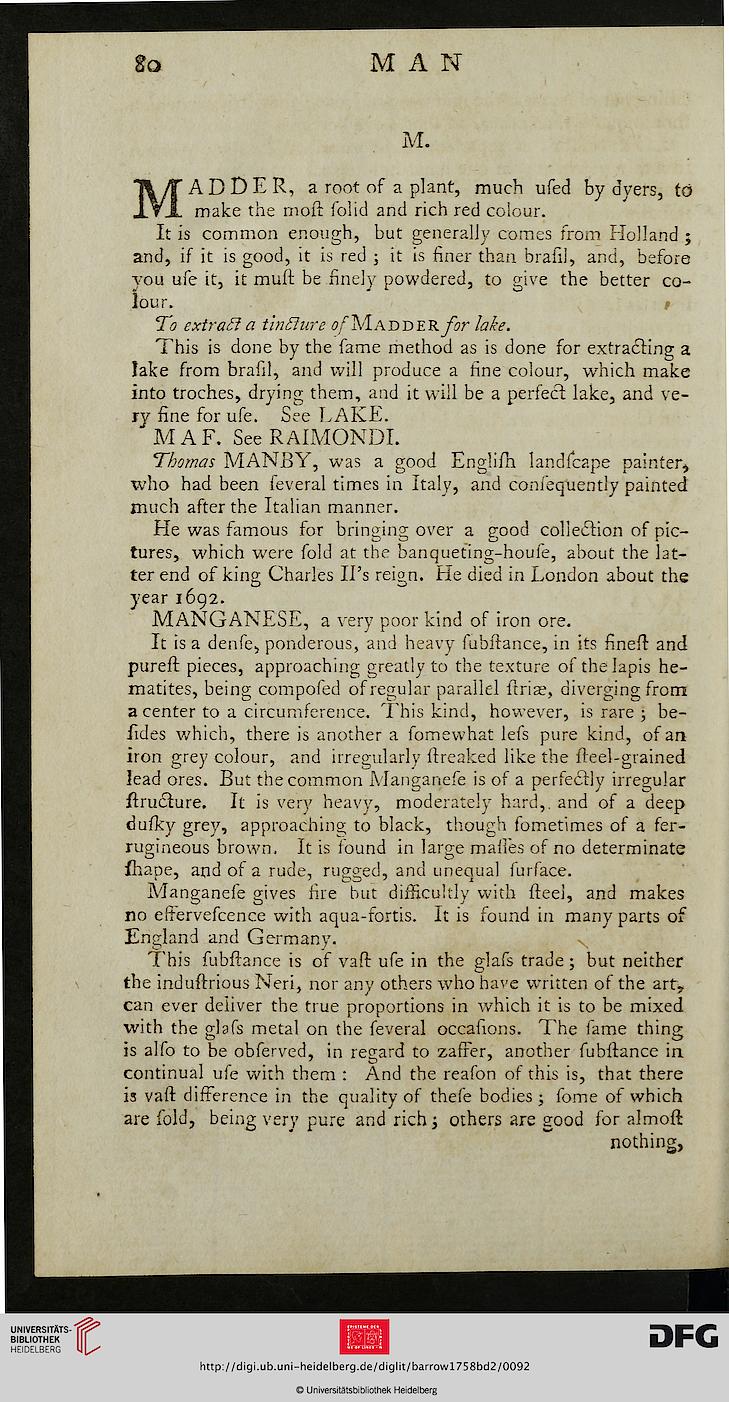 MADDER, a root of a plant, much ufed by dyers, to
make the mofi folid and rich red colour.
It is common enough, but generally comes from Holland ;
and, if it is good, it is red ; it is finer than brafil, and, before
you ufe it, it muft be finely powdered, to give the better co-
lour.

To extract a tinflure of Madder for lake.

This is done by the fame method as is done for extracting a
lake from brafil, and will produce a fine colour, which make
into troches, drying them, and it will be a perfect lake, and ve-
ry fine for ufe. See LAKE.

Thomas MANBY, was a good Englifh landfcape painter,
who had been feveral times in Italy, and coniequently painted
much after the Italian manner.

He was famous for bringing over a good collection of pic-
tures, which were fold at the banquefing-houfe, about the lat-
ter end of kins; Charles II's reion. He died in London about the
year 1692.

It is a denfe, ponderous, and heavy fubftance, in its fineft and
pureft pieces, approaching greatly to the texture of the lapis he-
matites, being compofed of regular parallel ltria?, diverging from
a center to a circumference. This kind, however, is rare ; be-
fides which, there is another a fomewhat lefs pure kind, of an
iron grey colour, and irregularly ftreaked like the fteel-grained
lead ores. But the common Alanganefe is of a perfectly irregular
ftructure. It is very heavy, moderately hard,, and of a deep
dufky grey, approaching to black, though fometimes of a fer-
rugineous brown. It is found in large maii'es of no determinate
lhape, and of a rude, rugged, and unequal furface.

Manganefe gives fire but difficultly with fteei, and makes
no efrervefcence with aqua-fortis. It is found in many parts of
England and Germany,

This fubftance is of vaft ufe in the glafs trade ; but neither
the induftrious Neri, nor any others who have written of the art,
can ever deliver the true proportions in which it is to be mixed
with the glafs metal on the feveral occafions. The fame thins:
is alfo to be obferved, in regard to zaffer, another fubftance in
continual ufe with them : And the reafon of this is, that there
is vaft difference in the quality of thefe bodies; fome of which
are fold, being very pure and rich; others are good for almofi