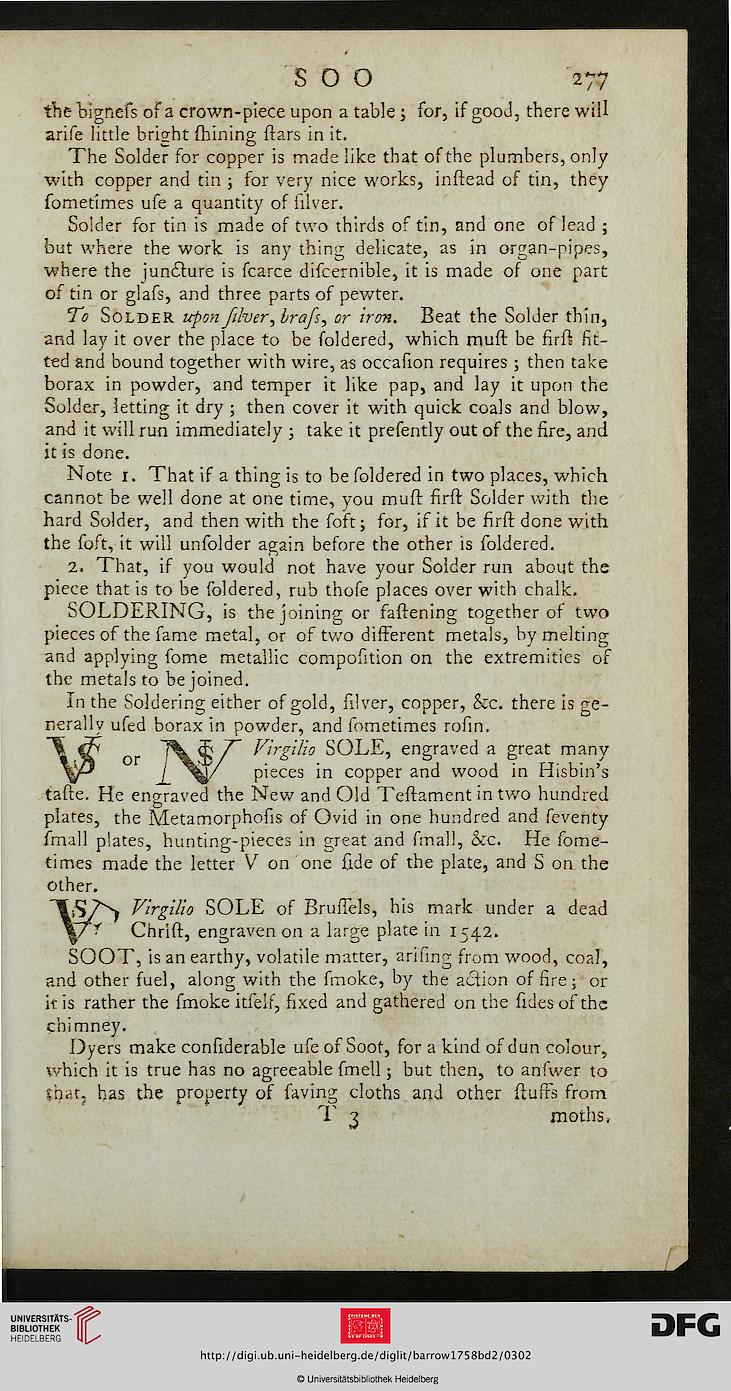 the bignefs of a crown-piece upon a table; for, if good, there will
arife little bright fhining ftars in it.

The Solder for copper is made like that of the plumbers, only
with copper and tin j for very nice works, inftead of tin, they
fometimes ufe a quantity of filver.

Solder for tin is made of two thirds of tin, and one of lead ;
but where the work is any thing delicate, as in organ-pipes,
where the juncture is fcarce difcernible, it is made of one part
of tin or glafs, and three parts of pewter.

To Solder uponftlver^brafs, or iron. Beat the Solder thin,
and lay it over the place to be foldered, which muft be firft fit-
ted and bound together with wire, as occafion requires ; then take
borax in powder, and temper it like pap, and lay it upon the
Solder, letting it dry ; then cover it with quick coals and blow,
and it will run immediately ; take it prefently out of the fire, and
it is done.

Note i. That if a thing is to be foldered in two places, which
cannot be well done at one time, you muft firft Solder with the
hard Solder, and then with the foft; for, if it be firft done with
the foft, it will unfolder again before the other is foldered.

2. That, if you would not have your Solder run about the
piece that is to be foldered, rub thofe places over with chalk.

SOLDERING, is the joining or faftening together of two
pieces of the fame metal, or of two different metals, by melting
and applying fome metallic compofition on the extremities of
the metals to be joined.

In the Soldering either of gold, filver, copper, See. there is ge-
nerally ufed borax in powder, and fometimes rofin.
T tiF or 7^$/" y*r£*ti° SOLE, engraved a great many

\T j_ ifi/ pieces in copper and wood in Hisbin's

tafte. He engraved the New and Old Teftament in two hundred
plates, the Metamorphofis of Ovid in one hundred and feventy
fmall plates, hunting-pieces in great and final), &rc. He fome-
times made the letter V on one fide of the plate, and S on the
other.

T-,1??^ Virgilio SOLE of BrufTels, his mark under a dead
\/r Chrift, engraven on a large plate in 1542.
SOOT, is an earthy, volatile matter, arifing from wood, coal,

and other fuel, along with the fmoke, by the action of fire; or

it is rather the fmoke itfelf, fixed and gathered on the fides of the

Dyers make confiderable ufe of Soot, for a kind of dun colour,
which it is true has no agreeable fmell ; but then, to anfwer to
&at3 has the property of faving cloths and other fluffs from