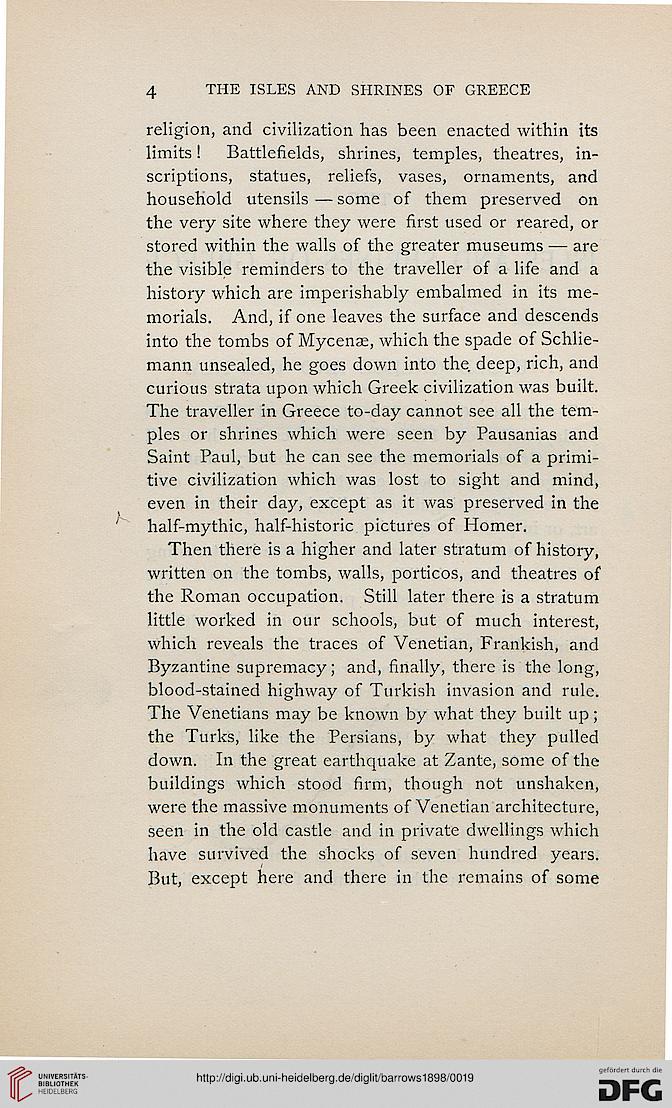 Information about OCR text
4 THE ISLES AND SHRINES OF GREECE

religion, and civilization has been enacted within its
limits! Battlefields, shrines, temples, theatres, in-
scriptions, statues, reliefs, vases, ornaments, and
household utensils — some of them preserved on
the very site where they were first used or reared, or
stored within the walls of the greater museums — are
the visible reminders to the traveller of a life and a
history which are imperishably embalmed in its me-
morials. And, if one leaves the surface and descends
into the tombs of Mycenae, which the spade of Schlie-
mann unsealed, he goes down into the deep, rich, and
curious strata upon which Greek civilization was built.
The traveller in Greece to-day cannot see all the tem-
ples or shrines which were seen by Pausanias and
Saint Paul, but he can see the memorials of a primi-
tive civilization which was lost to sight and mind,
even in their day, except as it was preserved in the
half-mythic, half-historic pictures of Homer.

Then there is a higher and later stratum of history,
written on the tombs, walls, porticos, and theatres of
the Roman occupation. Still later there is a stratum
little worked in our schools, but of much interest,
which reveals the traces of Venetian, Frankish, and
Byzantine supremacy; and, finally, there is the long,
blood-stained highway of Turkish invasion and rule.
The Venetians may be known by what they built up ;
the Turks, like the Persians, by what they pulled
down. In the great earthquake at Zante, some of the
buildings which stood firm, though not unshaken,
were the massive monuments of Venetian architecture,
seen in the old castle and in private dwellings which
have survived the shocks of seven hundred years.
But, except here and there in the remains of some