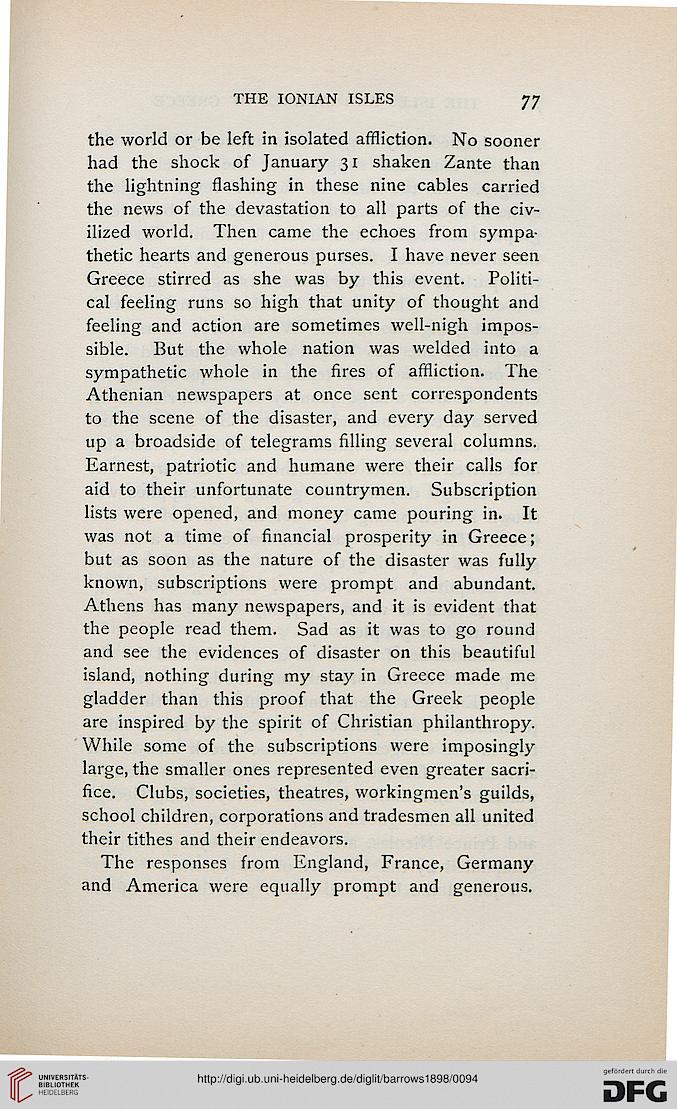 the world or be left in isolated affliction. No sooner
had the shock of January 31 shaken Zante than
the lightning flashing in these nine cables carried
the news of the devastation to all parts of the civ-
ilized world. Then came the echoes from sympa-
thetic hearts and generous purses. I have never seen
Greece stirred as she was by this event. Politi-
cal feeling runs so high that unity of thought and
feeling and action are sometimes well-nigh impos-
sible. But the whole nation was welded into a
sympathetic whole in the fires of affliction. The
Athenian newspapers at once sent correspondents
to the scene of the disaster, and every day served
up a broadside of telegrams filling several columns.
Earnest, patriotic and humane were their calls for
aid to their unfortunate countrymen. Subscription
lists were opened, and money came pouring in. It
was not a time of financial prosperity in Greece;
but as soon as the nature of the disaster was fully
known, subscriptions were prompt and abundant.
Athens has many newspapers, and it is evident that
the people read them. Sad as it was to go round
and see the evidences of disaster on this beautiful
island, nothing during my stay in Greece made me
gladder than this proof that the Greek people
are inspired by the spirit of Christian philanthropy.
While some of the subscriptions were imposingly
large, the smaller ones represented even greater sacri-
fice. Clubs, societies, theatres, workingmen's guilds,
school children, corporations and tradesmen all united
their tithes and their endeavors.

The responses from England, France, Germany
and America were equally prompt and generous.