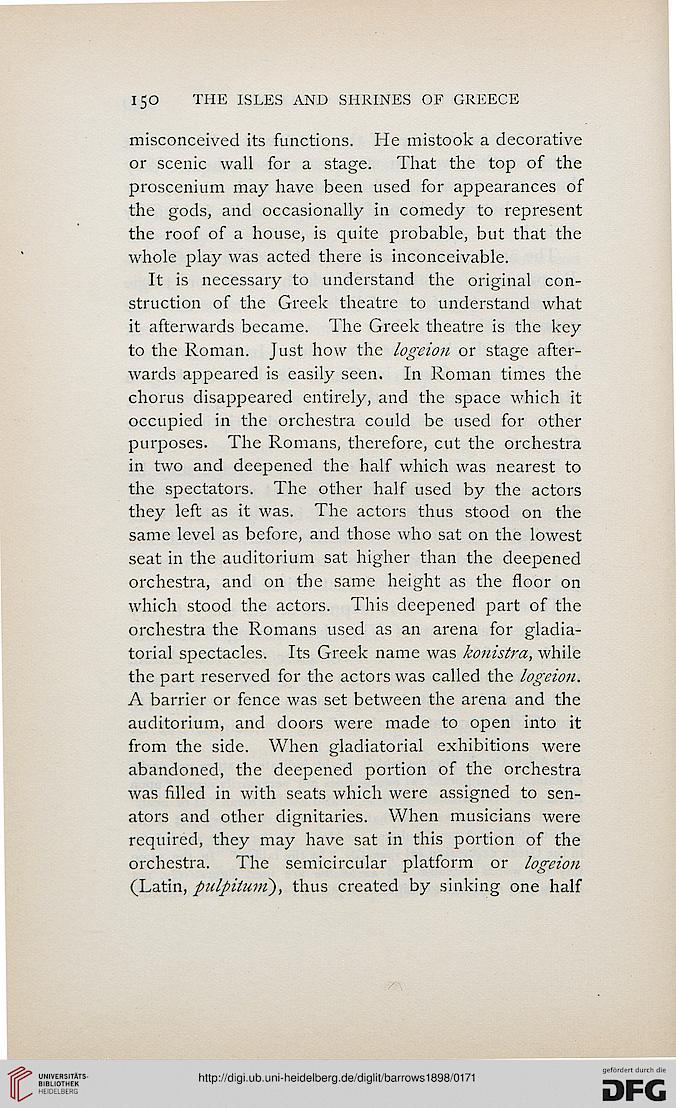 Information about OCR text
150 THE ISLES AND SHRINES OF GREECE

misconceived its functions. He mistook a decorative
or scenic wall for a stage. That the top of the
proscenium may have been used for appearances of
the gods, and occasionally in comedy to represent
the roof of a house, is quite probable, but that the
whole play was acted there is inconceivable.

It is necessary to understand the original con-
struction of the Greek theatre to understand what
it afterwards became. The Greek theatre is the key
to the Roman. Just how the logcion or stage after-
wards appeared is easily seen. In Roman times the
chorus disappeared entirely, and the space which it
occupied in the orchestra could be used for other
purposes. The Romans, therefore, cut the orchestra
in two and deepened the half which was nearest to
the spectators. The other half used by the actors
they left as it was. The actors thus stood on the
same level as before, and those who sat on the lowest
seat in the auditorium sat higher than the deepened
orchestra, and on the same height as the floor on
which stood the actors. This deepened part of the
orchestra the Romans used as an arena for gladia-
torial spectacles. Its Greek name was konistra, while
the part reserved for the actors was called the logeion.
A barrier or fence was set between the arena and the
auditorium, and doors were made to open into it
from the side. When gladiatorial exhibitions were
abandoned, the deepened portion of the orchestra
was filled in with seats which were assigned to sen-
ators and other dignitaries. When musicians were
required, they may have sat in this portion of the
orchestra. The semicircular platform or logcion
(Latin, pulpituni), thus created by sinking one half