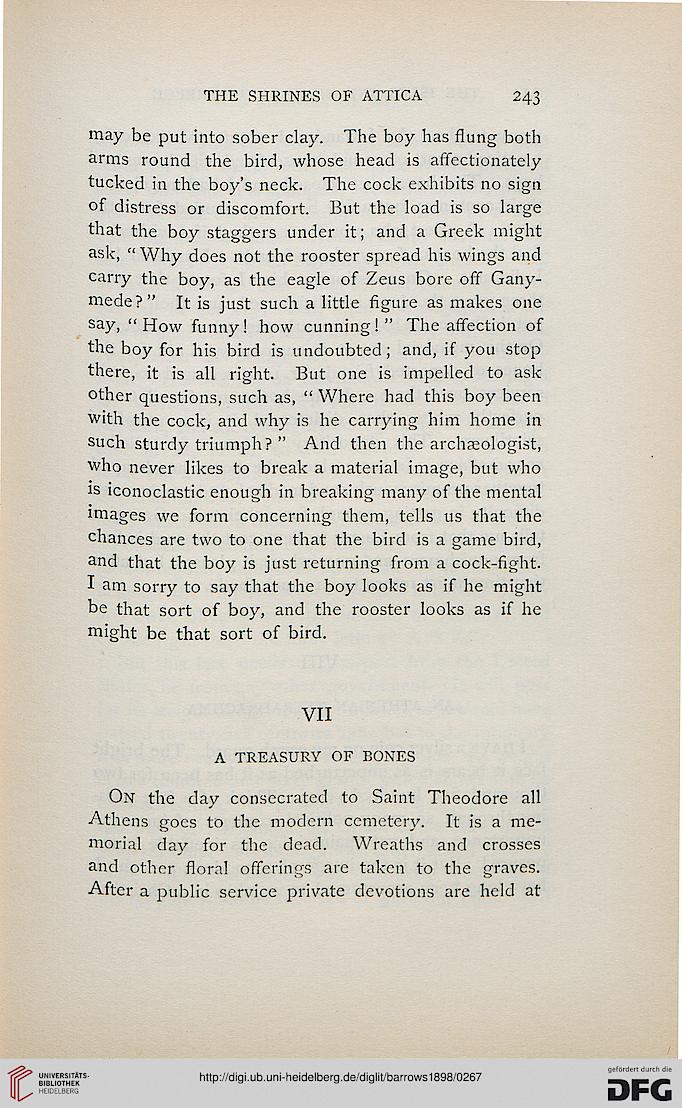 Information about OCR text
THE SHRINES OF ATTICA 243

may be put into sober clay. The boy has flung both
arms round the bird, whose head is affectionately
tucked in the boy's neck. The cock exhibits no sign
of distress or discomfort. But the load is so large
that the boy staggers under it; and a Greek might
ask, " Why does not the rooster spread his wings and
carry the boy, as the eagle of Zeus bore off Gany-
mede?" It is just such a little figure as makes one
say, " How funny! how cunning! " The affection of
the boy for his bird is undoubted; and, if you stop
there, it is all right. But one is impelled to ask
other questions, such as, " Where had this boy been
with the cock, and why is he carrying him home in
such sturdy triumph? " And then the archaeologist,
who never likes to break a material image, but who
is iconoclastic enough in breaking many of the mental
images we form concerning them, tells us that the
chances are two to one that the bird is a game bird,
and that the boy is just returning from a cock-fight.
I am sorry to say that the boy looks as if he might
be that sort of boy, and the rooster looks as if he
might be that sort of bird.

A TREASURY OF BONES

On the day consecrated to Saint Theodore all
Athens goes to the modern cemetery. It is a me-
morial day for the dead. Wreaths and crosses
and other floral offerings arc taken to the graves.
After a public service private devotions are held at