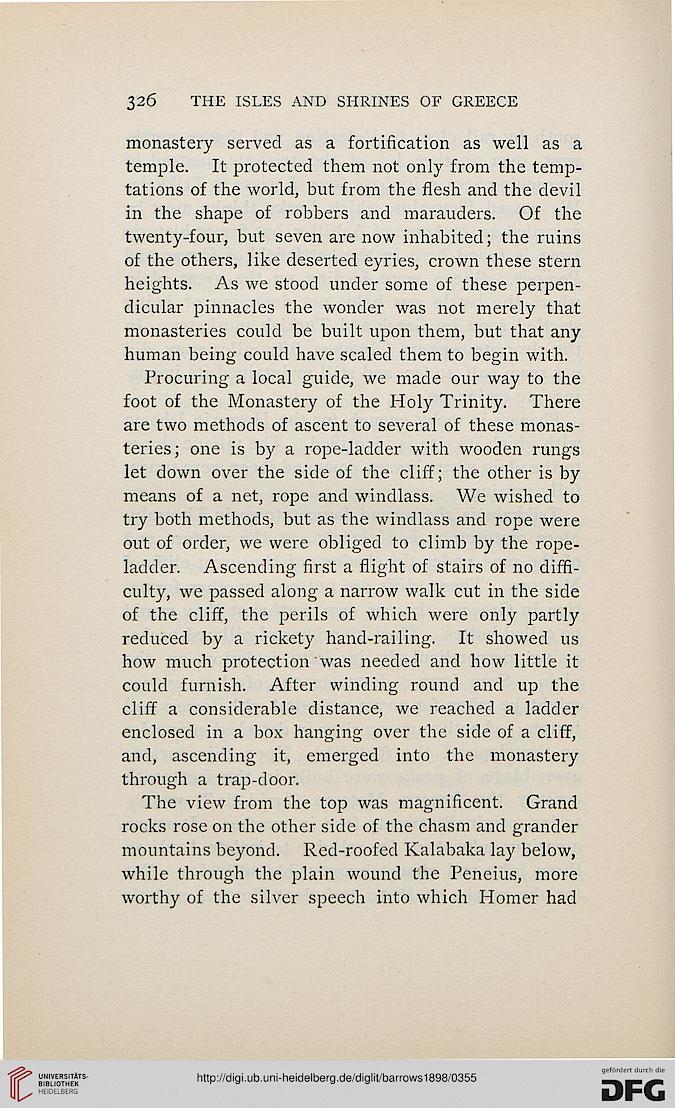 Information about OCR text
326 THE ISLES AND SHRINES OF GREECE

monastery served as a fortification as well as a
temple. It protected them not only from the temp-
tations of the world, but from the flesh and the devil
in the shape of robbers and marauders. Of the
twenty-four, but seven are now inhabited; the ruins
of the others, like deserted eyries, crown these stern
heights. As we stood under some of these perpen-
dicular pinnacles the wonder was not merely that
monasteries could be built upon them, but that any
human being could have scaled them to begin with.

Procuring a local guide, we made our way to the
foot of the Monastery of the Holy Trinity. There
are two methods of ascent to several of these monas-
teries; one is by a rope-ladder with wooden rungs
let down over the side of the cliff; the other is by
means of a net, rope and windlass. We wished to
try both methods, but as the windlass and rope were
out of order, we were obliged to climb by the rope-
ladder. Ascending first a flight of stairs of no diffi-
culty, we passed along a narrow walk cut in the side
of the cliff, the perils of which were only partly
reduced by a rickety hand-railing. It showed us
how much protection was needed and how little it
could furnish. After winding round and up the
cliff a considerable distance, we reached a ladder
enclosed in a box hanging over the side of a cliff,
and, ascending it, emerged into the monastery
through a trap-door.

The view from the top was magnificent. Grand
rocks rose on the other side of the chasm and grander
mountains beyond. Red-roofed Kalabaka lay below,
while through the plain wound the Peneius, more
worthy of the silver speech into which Homer had