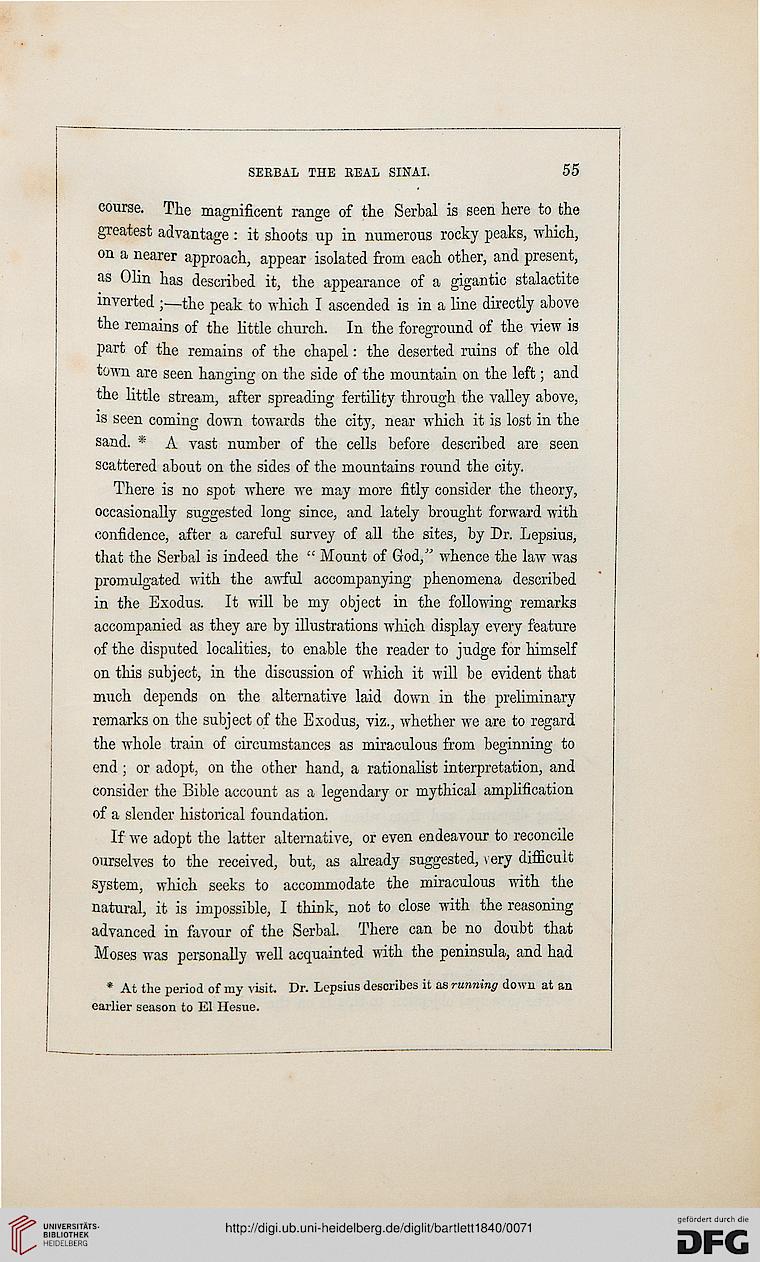 course. The magnificent range of the Serbal is seen here to the
greatest advantage : it shoots up in numerous rocky peaks, which,
on a nearer approach, appear isolated from each other, and present,
as Olin has described it, the appearance of a gigantic stalactite
inverted ;—the peak to which I ascended is in a line directly above
the remains of the little church. In the foreground of the view is
part of the remains of the chapel: the deserted ruins of the old
town are seen hanging on the side of the mountain on the left; and
the little stream, after spreading fertility through the valley above,
is seen coming down towards the city, near which it is lost in the
sand. * A vast number of the cells before described are seen
scattered about on the sides of the mountains round the city.

There is no spot where we may more fitly consider the theory,
occasionally suggested long since, and lately brought forward with
confidence, after a careful survey of all the sites, by Dr. Lepsius,
that the Serbal is indeed the " Mount of God/' whence the law was
promulgated with the awful accompanying phenomena described
in the Exodus. It will be my object in the following remarks
accompanied as they are by illustrations which display every feature
of the disputed localities, to enable the reader to judge for himself
on this subject, in the discussion of which it will be evident that
much depends on the alternative laid down in the preliminary
remarks on the subject of the Exodus, viz., whether we are to regard
the whole train of circumstances as miraculous from beginning to
end; or adopt, on the other hand, a rationalist interpretation, and
consider the Bible account as a legendary or mythical amplification
of a slender historical foundation.

If we adopt the latter alternative, or even endeavour to reconcile
ourselves to the received, but, as already suggested, very difficult
system, which seeks to accommodate the miraculous with the
natural, it is impossible, I think, not to close with the reasoning
advanced in favour of the Serbal. There can be no doubt that
Moses was personally well acquainted with the peninsula, and had

* At the period of my visit Dr. Lepsius describes it as running down at an
earlier season to El Hesue.