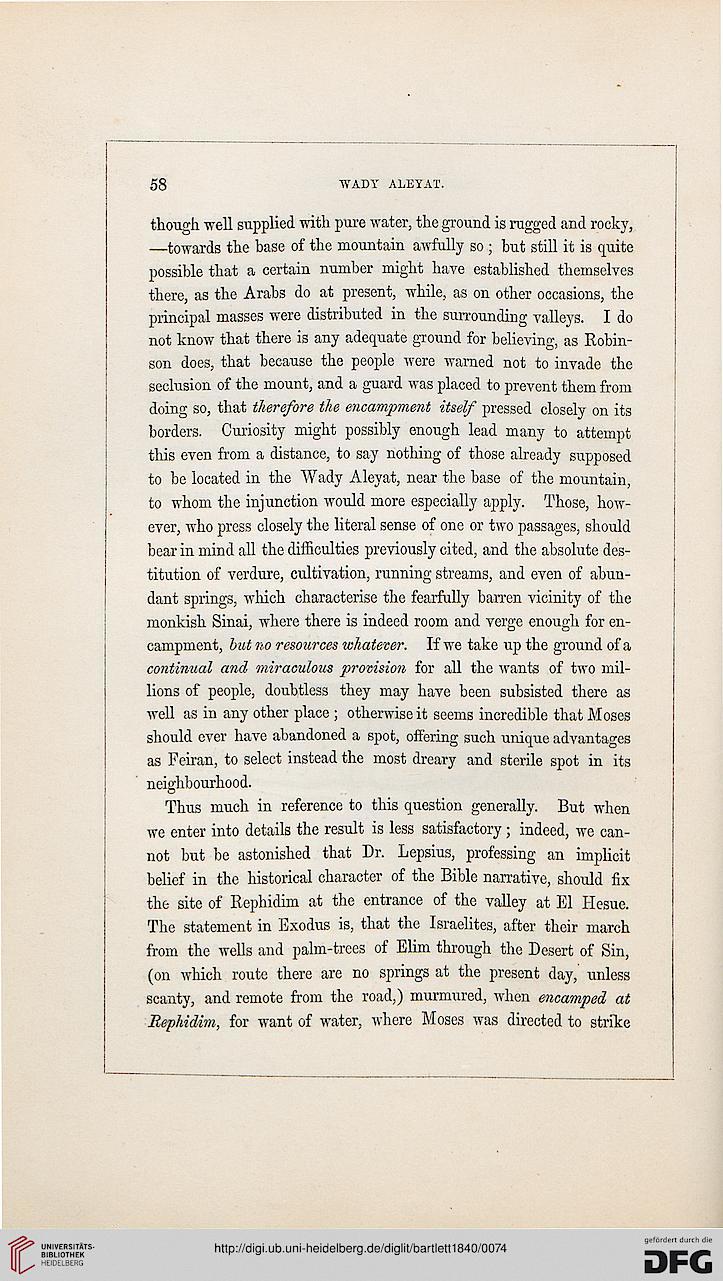 though well supplied with pure water, the ground is rugged and rocky,
—towards the base of the mountain awfully so ; but still it is quite
possible that a certain number might have established themselves
there, as the Arabs do at present, while, as on other occasions, the
principal masses were distributed in the surrounding valleys. I do
not know that there is any adequate ground for believing, as Robin-
son does, that because the people were warned not to invade the
seclusion of the mount, and a guard was placed to prevent them from
doing so, that therefore the encampment itself pressed closely on its
borders. Curiosity might possibly enough lead many to attempt
this even from a distance, to say nothing of those already supposed
to be located in the Wady Aleyat, near the base of the mountain,
to whom the injunction would more especially apply. Those, how-
ever, who press closely the literal sense of one or two passages, should
bear in mind all the difficulties previously cited, and the absolute des-
titution of verdure, cultivation, running streams, and even of abun-
dant springs, which characterise the fearfully barren vicinity of the
monkish Sinai, where there is indeed room and verge enough for en-
campment, but no resources whatever. If we take up the ground of a
continual and miraculous provision for all the wants of two mil-
lions of people, doubtless they may have been subsisted there as
well as in any other place ; otherwise it seems incredible that Moses
should ever have abandoned a spot, offering such unique advantages
as Feiran, to select instead the most dreary and sterile spot in its
neighbourhood.

Thus much in reference to this question generally. But when
we enter into details the result is less satisfactory; indeed, we can-
not but be astonished that Dr. Lepsius, professing an implicit
belief in the historical character of the Bible narrative, should fix
the site of Rephidim at the entrance of the valley at El Hesue.
The statement in Exodus is, that the Israelites, after their march
from the wells and palm-trees of Elim through the Desert of Sin,
(on which route there are no springs at the present day, unless
scanty, and remote from the road,) murmured, when encamped at
Rephidim, for want of water, where Moses was directed to strike