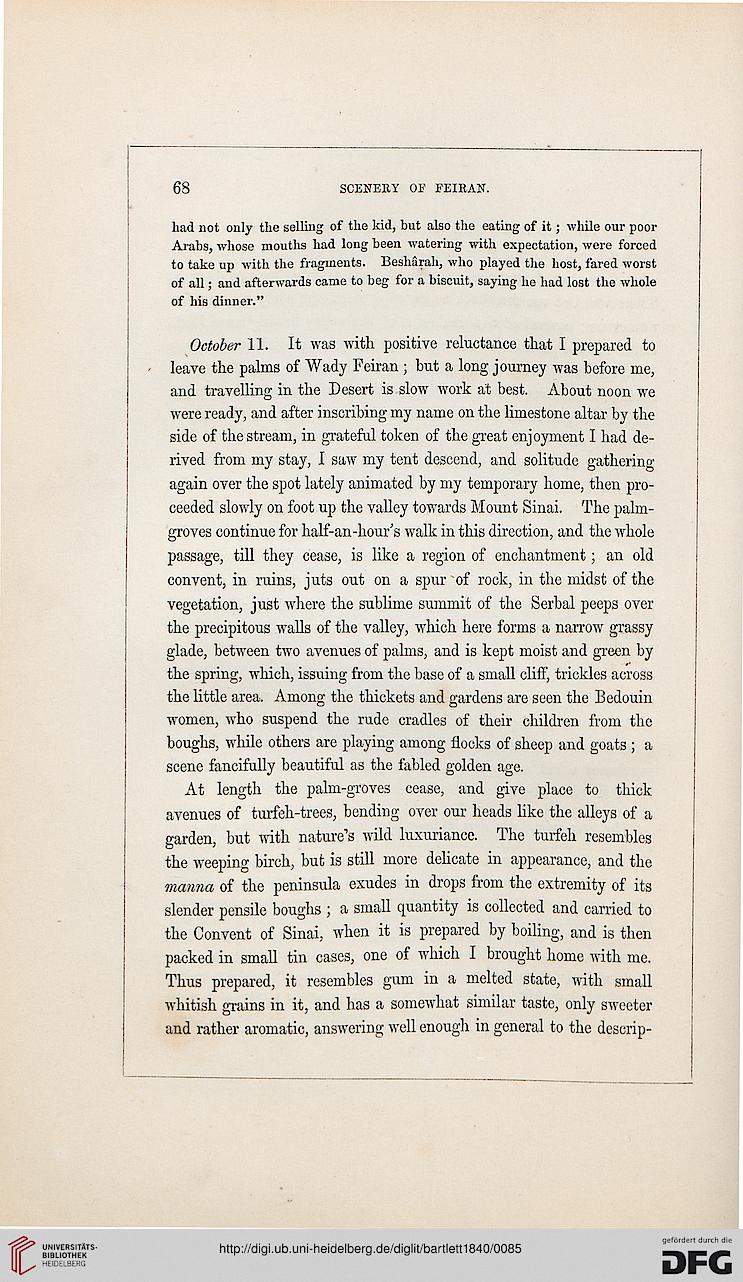 had not only the selling of the kid, but also the eating of it; while our poor
Arabs whose mouths had long been watering with expectation, were forced
to take up with the fragments. Besharah, who played the host, fared worst
of all • and afterwards came to beg for a biscuit, saying he had lost the whole
of his dinner."

October 11. It was with positive reluctance that I prepared to
leave the palms of Wady Feiran ; but a long journey was before me,
and travellino- in the Desert is slow work at best. About noon we
were ready, and after inscribing my name on the limestone altar by the
side of the stream, in grateful token of the great enjoyment I had de-
rived from my stay, I saw my tent descend, and solitude gathering
again over the spot lately animated by my temporary home, then pro-
ceeded slowly on foot up the valley towards Mount Sinai. The palm-
groves continue for half-an-hour's walk in this direction, and the whole
passage, till they cease, is like a region of enchantment; an old
convent, in ruins, juts out on a spur of rock, in the midst of the
vegetation, just where the sublime summit of the Serbal peeps over
the precipitous walls of the valley, which here forms a narrow grassy
glade, between two avenues of palms, and is kept moist and green by
the spring, which, issuing from the base of a small cliff, trickles across
the little area. Among the thickets and gardens are seen the Bedouin
women, who suspend the rude cradles of their children from the
boughs, while others are playing among flocks of sheep and goats ; a
scene fancifully beautiful as the fabled golden age.

At length the palm-groves cease, and give place to thick
avenues of turfeh-trees, bending over our heads like the alleys of a
garden, but with nature's wild luxuriance. The turfeh resembles
the weepino- birch, but is still more delicate in appearance, and the
manna of the peninsula exudes in drops from the extremity of its
slender pensile boughs ; a small quantity is collected and carried to
the Convent of Sinai, when it is prepared by boiling, and is then
packed in small tin cases, one of which I brought home with me.
Thus prepared, it resembles gum in a melted state, with small
whitish trains in it, and has a somewhat similar taste, only sweeter
and rather aromatic, answering well enougli in general to the descrip-