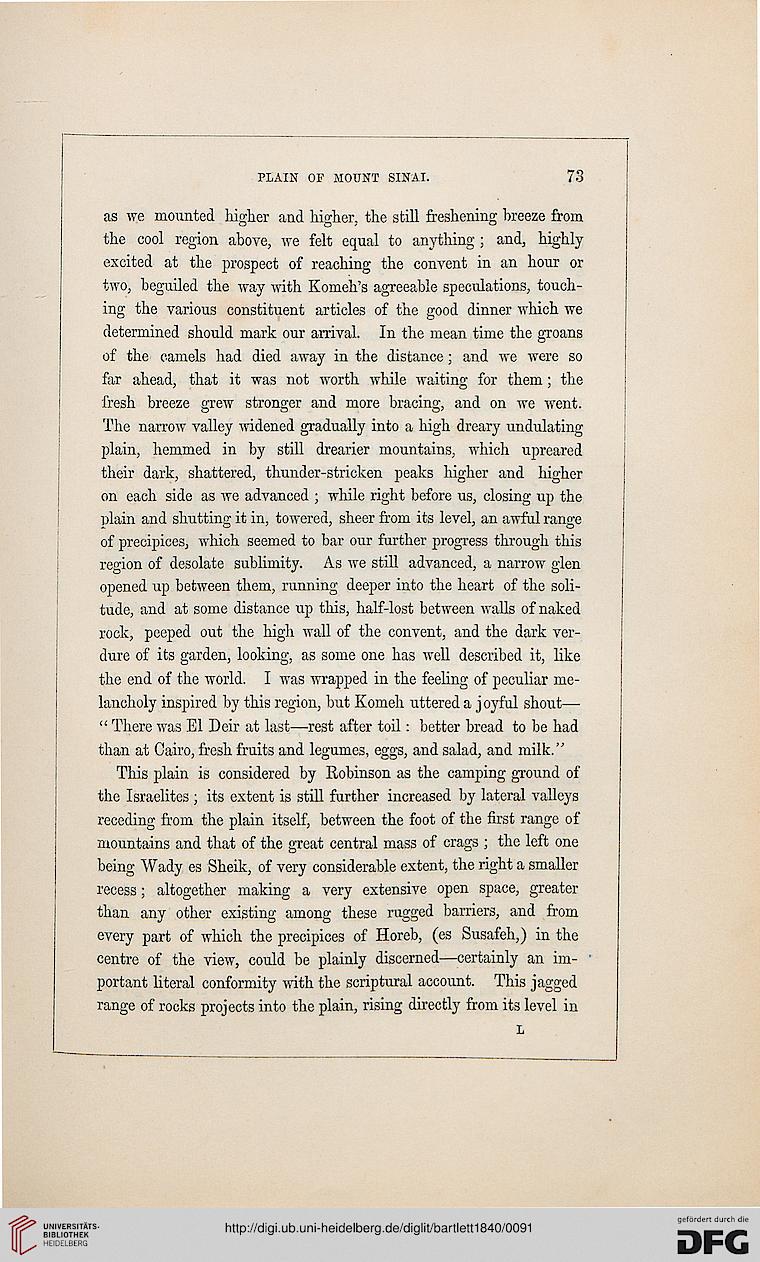 as we mounted higher and higher, the still freshening breeze from
the cool region above, we felt equal to anything ; and, highly
excited at the prospect of reaching the convent in an hour or
two, beguiled the way with Komeh's agreeable speculations, touch-
ing the various constituent articles of the good dinner which we
determined should mark our arrival. In the mean time the groans
of the camels had died away in the distance; and we were so
far ahead, that it was not worth while waiting for them; the
fresh breeze grew stronger and more bracing, and on we went.
The narrow valley widened gradually into a high dreary undulating
plain, hemmed in by still drearier mountains, which upreared
their dark, shattered, thunder-stricken peaks higher and higher
on each side as we advanced ; while right before us, closing up the
plain and shutting it in, towered, sheer from its level, an awful range
of precipices, which seemed to bar our further progress through this
region of desolate sublimity. As we still advanced, a narrow glen
opened up between them, running deeper into the heart of the soli-
tude, and at some distance up this, half-lost between walls of naked
rock, peeped out the high wall of the convent, and the dark ver-
dure of its garden, looking, as some one has well described it, like
the end of the world. I was wrapped in the feeling of peculiar me-
lancholy inspired by this region, but Komeh uttered a joyful shout—
" There was El Deir at last—rest after toil: better bread to be had
than at Cairo, fresh fruits and legumes, eggs, and salad, and milk."

This plain is considered by Robinson as the camping ground of
the Israelites ; its extent is still further increased by lateral valleys
receding from the plain itself, between the foot of the first range of
mountains and that of the great central mass of crags ; the left one
being Wady es Sheik, of very considerable extent, the right a smaller
recess; altogether making a very extensive open space, greater
than any other existing among these rugged barriers, and from
every part of which the precipices of Horeb, (es Susafeh,) in the
centre of the view, could be plainly discerned—certainly an im-
portant literal conformity with the scriptural account. This jagged
range of rocks projects into the plain, rising directly from its level in