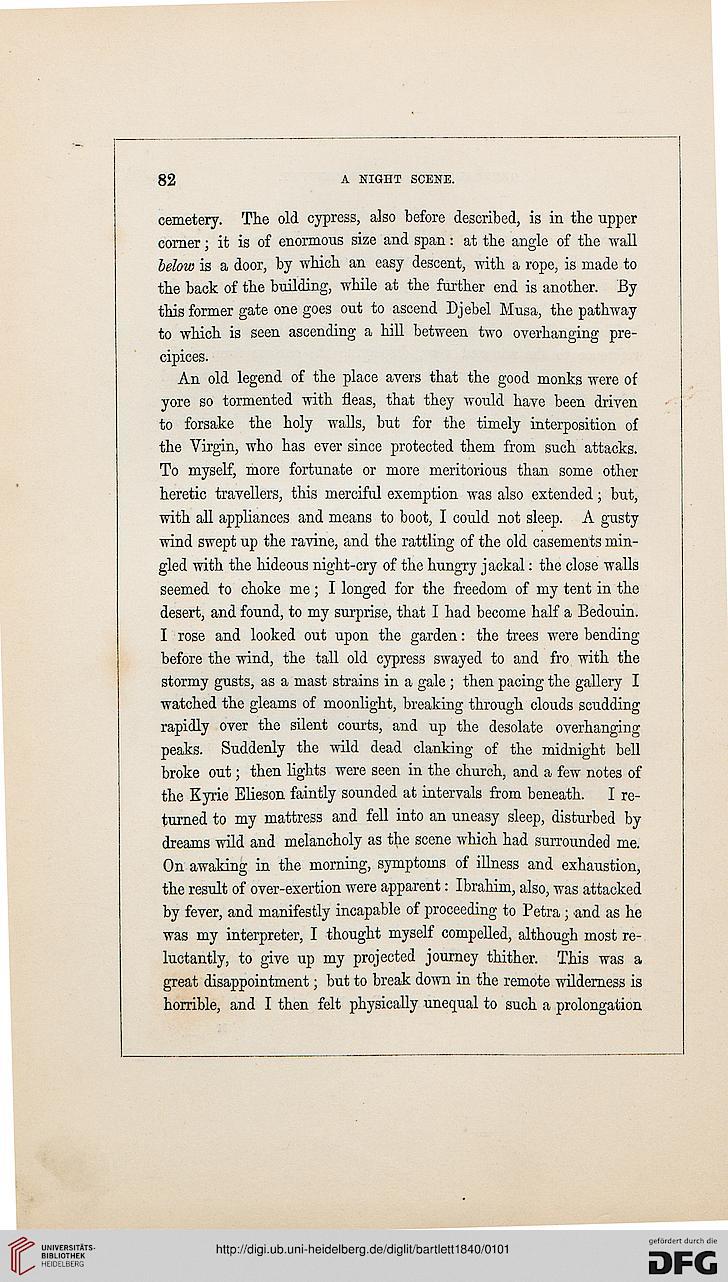 cemetery. The old cypress, also before described, is in the upper
corner; it is of enormous size and span: at the angle of the wall
below is a door, by which an easy descent, with a rope, is made to
the back of the building, while at the further end is another. By
this former gate one goes out to ascend Djebel Musa, the pathway
to which is seen ascending a hill between two overhanging pre-
cipices.

An old legend of the place avers that the good monks were of
yore so tormented with fleas, that they would have been driven
to forsake the holy walls, but for the timely interposition of
the Virgin, who has ever since protected them from such attacks.
To myself, more fortunate or more meritorious than some other
heretic travellers, this merciful exemption was also extended; but,
with all appliances and means to boot, I could not sleep. A gusty
wind swept up the ravine, and the rattling of the old casements min-
gled with the hideous night-cry of the hungry jackal: the close walls
seemed to choke me; I longed for the freedom of my tent in the
desert, and found, to my surprise, that I had become half a Bedouin.
I rose and looked out upon the garden: the trees were bending
before the wind, the tall old cypress swayed to and fro with the
stormy gusts, as a mast strains in a gale ; then pacing the gallery I
watched the gleams of moonlight, breaking through clouds scudding
rapidly over the silent courts, and up the desolate overhanging
peaks. Suddenly the wild dead clanking of the midnight bell
broke out; then lights were seen in the church, and a few notes of
the Kyrie Elieson faintly sounded at intervals from beneath. I re-
turned to my mattress and fell into an uneasy sleep, disturbed by
dreams wild and melancholy as the scene which had surrounded me.
On awaking in the morning, symptoms of illness and exhaustion,
the result of over-exertion were apparent: Ibrahim, also, was attacked
by fever, and manifestly incapable of proceeding to Petra; and as he
was my interpreter, I thought myself compelled, although most re-
luctantly, to give up my projected journey thither. This was a
great disappointment; but to break down in the remote wilderness is
horrible, and I then felt physically unequal to such a prolongation