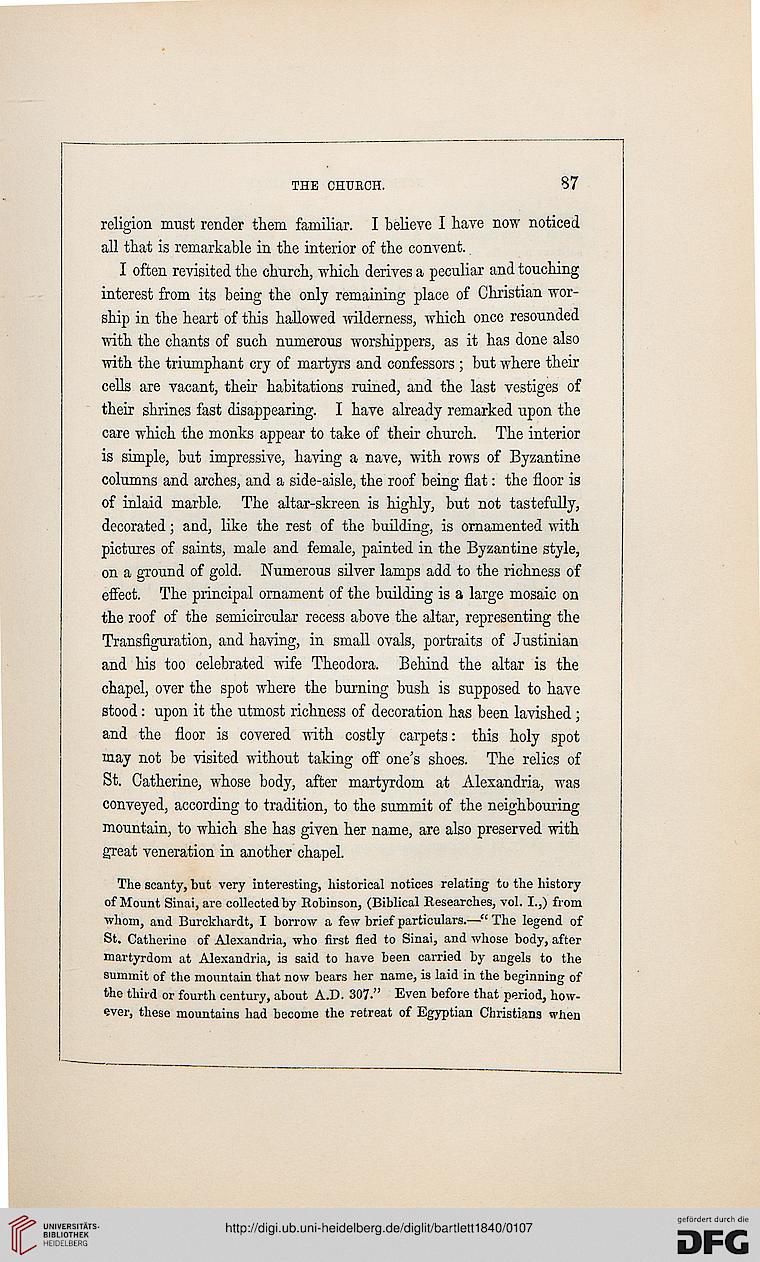 Information about OCR text
THE CHURCH.

religion must render them familiar. I believe I have now noticed
all that is remarkable in the interior of the convent.

I often revisited the church, which derives a peculiar and touching
interest from its being the only remaining place of Christian wor-
ship in the heart of this hallowed wilderness, which once resounded
with the chants of such numerous worshippers, as it has done also
with the triumphant cry of martyrs and confessors ; but where their
cells are vacant, their habitations ruined, and the last vestiges of
their shrines fast disappearing. I have already remarked upon the
care which the monks appear to take of their church. The interior
is simple, but impressive, having a nave, with rows of Byzantine
columns and arches, and a side-aisle, the roof being flat: the floor is
of inlaid marble. The altar-skreen is highly, but not tastefully,
decorated; and, like the rest of the building, is ornamented with
pictures of saints, male and female, painted in the Byzantine style,
on a ground of gold. Numerous silver lamps add to the richness of
effect. The principal ornament of the building is a large mosaic on
the roof of the semicircular recess above the altar, representing the
Transfiguration, and having, in small ovals, portraits of Justinian
and his too celebrated wife Theodora. Behind the altar is the
chapel, over the spot where the burning bush is supposed to have
stood: upon it the utmost richness of decoration has been lavished;
and the floor is covered with costly carpets: this holy spot
may not be visited without taking off one's shoes. The relics of
St. Catherine, whose body, after martyrdom at Alexandria, was
conveyed, according to tradition, to the summit of the neighbouring
mountain, to which she has given her name, are also preserved with
great veneration in another chapel.

The scanty, but very interesting, historical notices relating to the history
of Mount Sinai, are collected by Robinson, (Biblical Researches, vol. I.,) from
■whom, and Burckhardt, I borrow a few brief particulars.—" The legend of
St. Catherine of Alexandria, who first fled to Sinai, and whose body, after
martyrdom at Alexandria, i3 said to have been carried by angels to the
summit of the mountain that now bears her name, is laid in the beginning of
the third or fourth century, about A.D. 307." Even before that period, how-
ever, these mountains had become the retreat of Egyptian Christians when