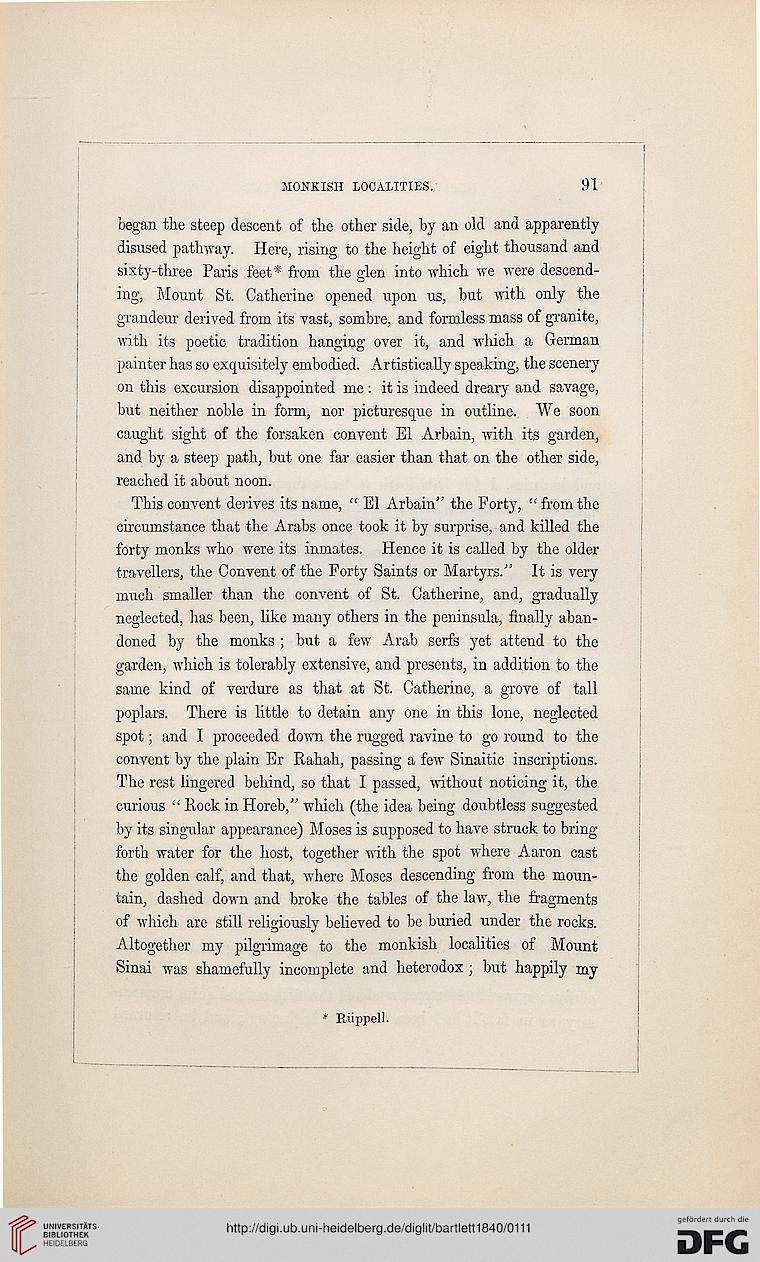 began the steep descent of the other side, by an old and apparently
disused pathway. Here, rising to the height of eight thousand and
sixty-three Paris feet* from the glen into which we were descend-
ing, Mount St. Catherine opened upon us, but with only the
grandeur derived from its vast, sombre, and formless mass of granite,
with its poetic tradition hanging over it, and which a German
painter has so exquisitely embodied. Artistically speaking, the scenery
on this excursion disappointed me : it is indeed dreary and savage,
but neither noble in form, nor picturesque in outline. We soon
caught sight of the forsaken convent El Arbain, with its garden,
and by a steep path, but one far easier than that on the other side,
reached it about noon.

This convent derives its name, " El Arbain" the Forty, " from the
circumstance that the Arabs once took it by surprise, and killed the
forty monks who were its inmates. Hence it is called by the older
travellers, the Convent of the Forty Saints or Martyrs." It is very
much smaller than the convent of St. Catherine, and, gradually
neglected, lias been, like many others in the peninsula, finally aban-
doned by the monks; but a few Arab serfs yet attend to the
garden, which is tolerably extensive, and presents, in addition to the
same kind of verdure as that at St. Catherine, a grove of tall
poplars. There is little to detain any one in this lone, neglected
spot; and I proceeded down the rugged ravine to go round to the
convent by the plain Er Rahah, passing a few Sinaitic inscriptions.
The rest lingered behind, so that I passed, without noticing it, the
curious " Rock in Horeb," which (the idea being doubtless suggested
by its singular appearance) Moses is supposed to have struck to bring-
forth water for the host, together with the spot where Aaron cast
the golden calf, and that, where Moses descending from the moun-
tain, dashed down and broke the tables of the law, the fragments
of which are still religiously believed to be buried under the rocks.
Altogether my pilgrimage to the monkish localities of Mount
Sinai was shamefully incomplete and heterodox ; but happily my