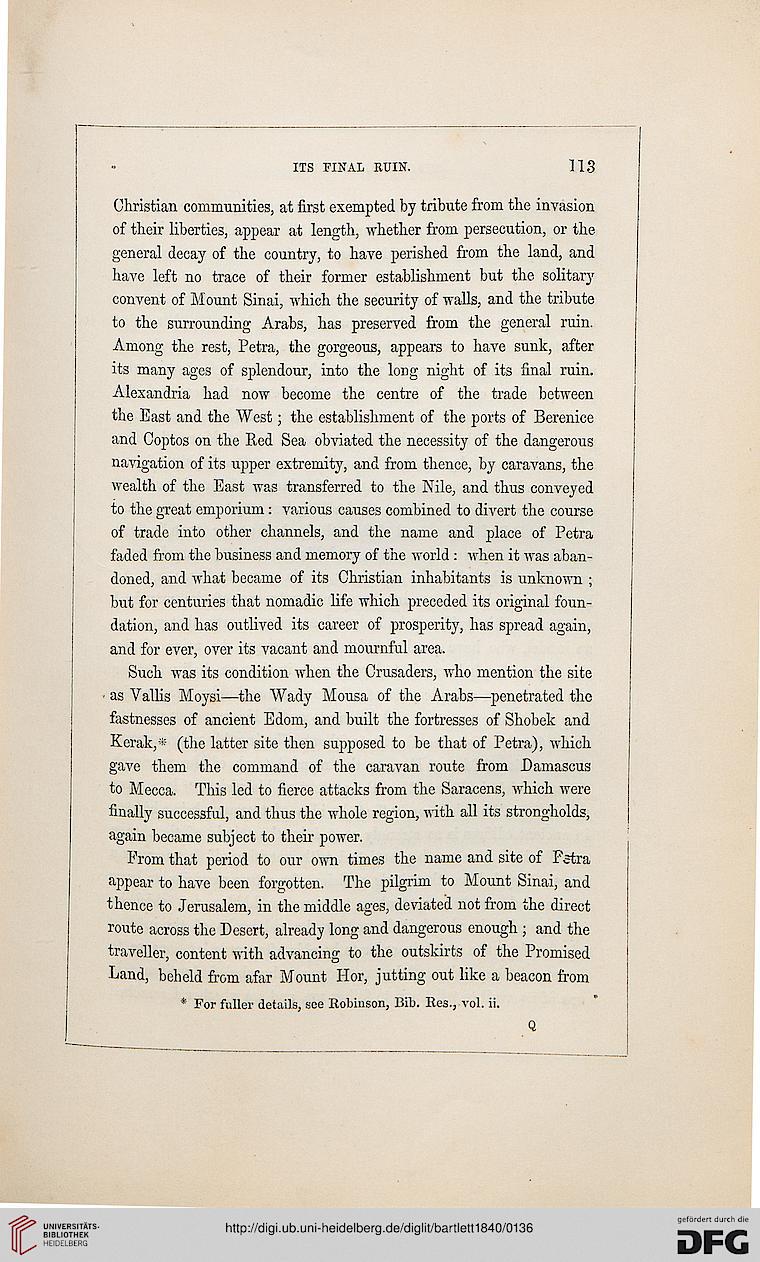 Christian communities, at first exempted by tribute from the invasion
of their liberties, appear at length, whether from persecution, or the
general decay of the country, to have perished from the land, and
have left no trace of their former establishment but the solitary
convent of Mount Sinai, which the security of walls, and the tribute
to the surrounding Arabs, has preserved from the general ruin.
Among the rest, Petra, the gorgeous, appears to have sunk, after
its many ages of splendour, into the long night of its final ruin.
Alexandria had now become the centre of the trade between
the East and the West; the establishment of the ports of Berenice
and Coptos on the Red Sea obviated the necessity of the dangerous
navigation of its upper extremity, and from thence, by caravans, the
wealth of the East was transferred to the Nile, and thus conveyed
to the great emporium : various causes combined to divert the course
of trade into other channels, and the name and place of Petra
faded from the business and memory of the world : when it was aban-
doned, and what became of its Christian inhabitants is unknown ;
but for centuries that nomadic life which preceded its original foun-
dation, and has outlived its career of prosperity, has spread again,
and for ever, over its vacant and mournful area.

Such was its condition when the Crusaders, who mention the site
■ as Vallis Moysi—the Wady Mousa of the Arabs—penetrated the
fastnesses of ancient Edom, and built the fortresses of Shobek and
Kerak,* (the latter site then supposed to be that of Petra), which
gave them the command of the caravan route from Damascus
to Mecca. This led to fierce attacks from the Saracens, which were
finally successful, and thus the whole region, with all its strongholds,
again became subject to their power.

Prom that period to our own times the name and site of Petra
appear to have been forgotten. The pilgrim to Mount Sinai, and
thence to Jerusalem, in the middle ages, deviated not from the direct
route across the Desert, already long and dangerous enough ; and the
traveller, content with advancing to the outskirts of the Promised
Land, beheld from afar Mount Hor, jutting out like a beacon from
* For fuller details, see Robinson, Bib. Res., vol. ii.