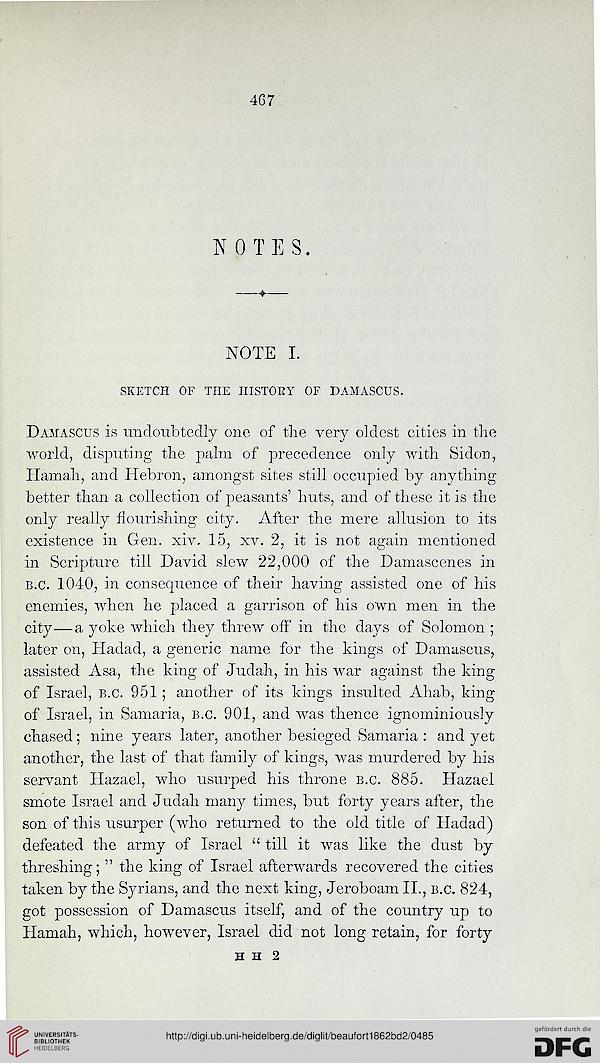 SKETCH OF THE niSTOKY OF DAMASCUS.

Damascus is undoubtedly one of the very oldest cities in the
world, disputing the palm of precedence only with Sidon,
Hamah, and Hebron, amongst sites still occupied by anything
better than a collection of peasants' huts, and of these it is the
only really flourishing city. After the mere allusion to its
existence in Gen. xiv. 15, xv. 2, it is not again mentioned
in Scripture till David slew 22,000 of the Damascenes in
b.C. 1040, in consequence of their having assisted one of his
enemies, when he placed a garrison of his own men in the
city—a yoke which they threw off in the days of Solomon ;
later on, Hadad, a generic name for the kings of Damascus,
assisted Asa, the king of Judah, in his war against the king
of Israel, b.C. 951; another of its kings insulted Ahab, king
of Israel, in Samaria, b.C. 901, and was thence ignominiously
chased; nine years later, another besieged Samaria : and yet
another, the last of that family of kings, was murdered by his
servant Hazael, who usurped his throne b.C. 885. Hazael
smote Israel and Judah many times, but forty years after, the
son of this usurper (who returned to the old title of Hadad)
defeated the army of Israel " till it was like the dust by
threshing; " the king of Israel afterwards recovered the cities
taken by the Syrians, and the next king, Jeroboam II., b.C. 824,
got possession of Damascus itself, and of the country up to
Hamah, which, however, Israel did not long retain, for forty