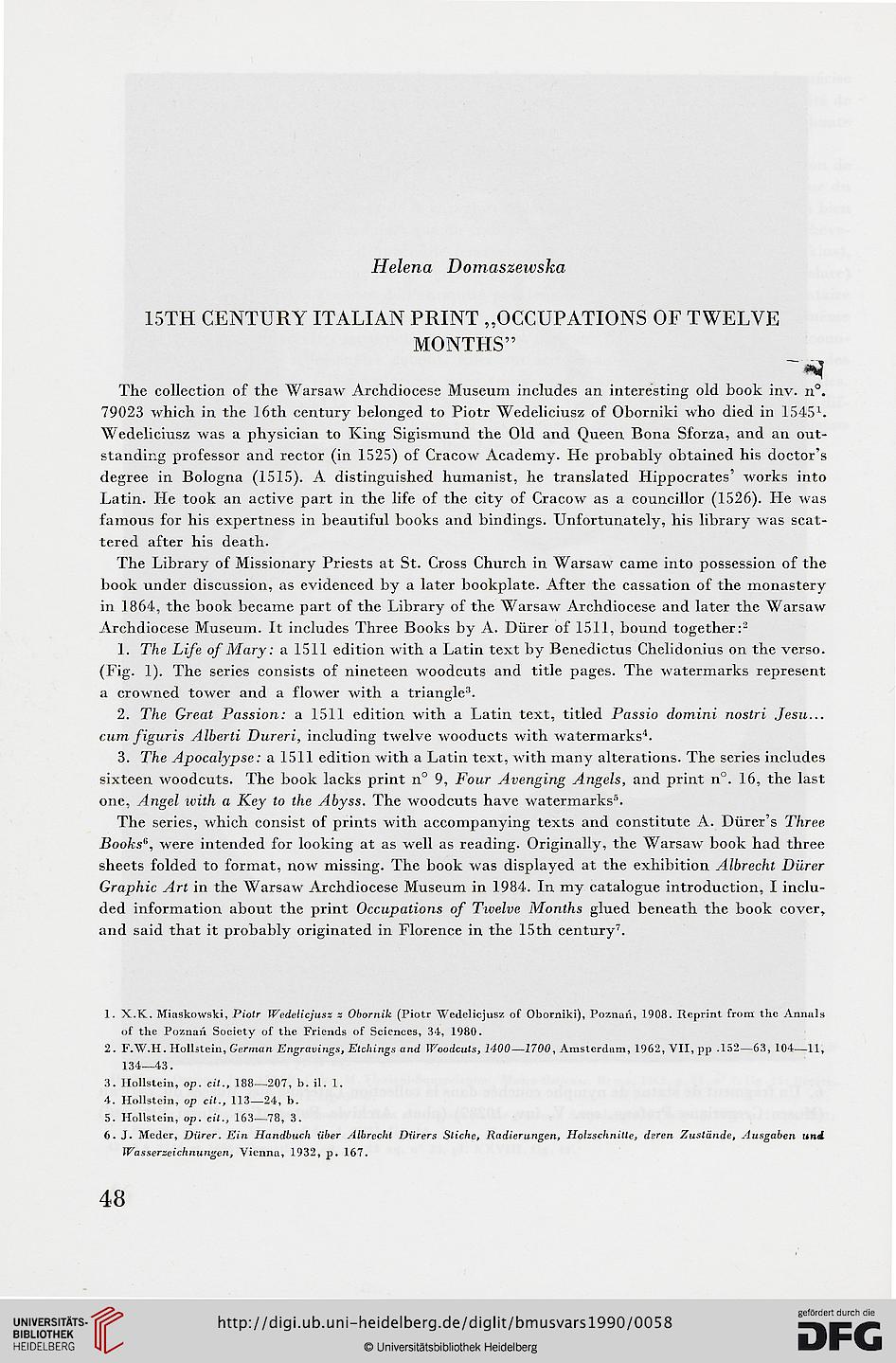 The collection of the Warsaw Archdiocese Museum includes an interesting old book inv. n°.
79023 which in the 16th century belonged to Piotr Wedeliciusz of Oborniki who died in 15451 2.
Wedeliciusz was a physician to King Sigismund the Old and Queen Bona Sforza, and an out-
standing professor and rector (in 1525) of Cracow Academy. He probably obtained his doctor’s
degree in Bologna (1515). A distinguished humanist, he translated Hippocrates’ works into
Latin. He took an active part in the life of the city of Cracow as a councillor (1526). He was
famous for his expertness in beautiful books and bindings. Unfortunately, his library was scat-
tered after his death.

The Library of Missionary Priests at St. Cross Church in Warsaw came into possession of the
book under discussion, as evidenced by a later bookplate. After the cassation of the monastery
in 1864, the book became part of the Library of the Warsaw Archdiocese and later the Warsaw
Archdiocese Museum. It includes Three Books by A. Dürer of 1511, bound together:2

1. The Life of Mary: a 1511 edition with a Latin text by Benedictus Chelidonius on the verso.
(Fig. 1). The series consists of nineteen woodcuts and title pages. The watermarks represent
a crowned tower and a flower with a triangle3.

3. The Apocalypse : a 1511 edition with a Latin text, with many alterations. The series includes
sixteen woodcuts. The book lacks print n° 9, Four Avenging Angels, and print n°. 16, the last
one, Angel with a Key to the Abyss. The woodcuts have watermarks5.

The series, which consist of prints with accompanying texts and constitute A. Dürer’s Three
Books6, were intended for looking at as well as reading. Originally, the Warsaw book had three
sheets folded to format, now missing. The book was displayed at the exhibition Albrecht Dürer
Graphic Art in the Warsaw Archdiocese Museum in 1984. In my catalogue introduction, I inclu-
ded information about the print Occupations of Twelve Months glued beneath the book cover,
and said that it probably originated in Florence in the 15th century7.

1. X.K. Miaskowski, Piotr Wedclicjusz z Obornik (Piotr Wedelicjusz of Oborniki), Poznań, 1908. Reprint from the Annals
of the Poznań Society of the Friends of Sciences, 34, 1980.