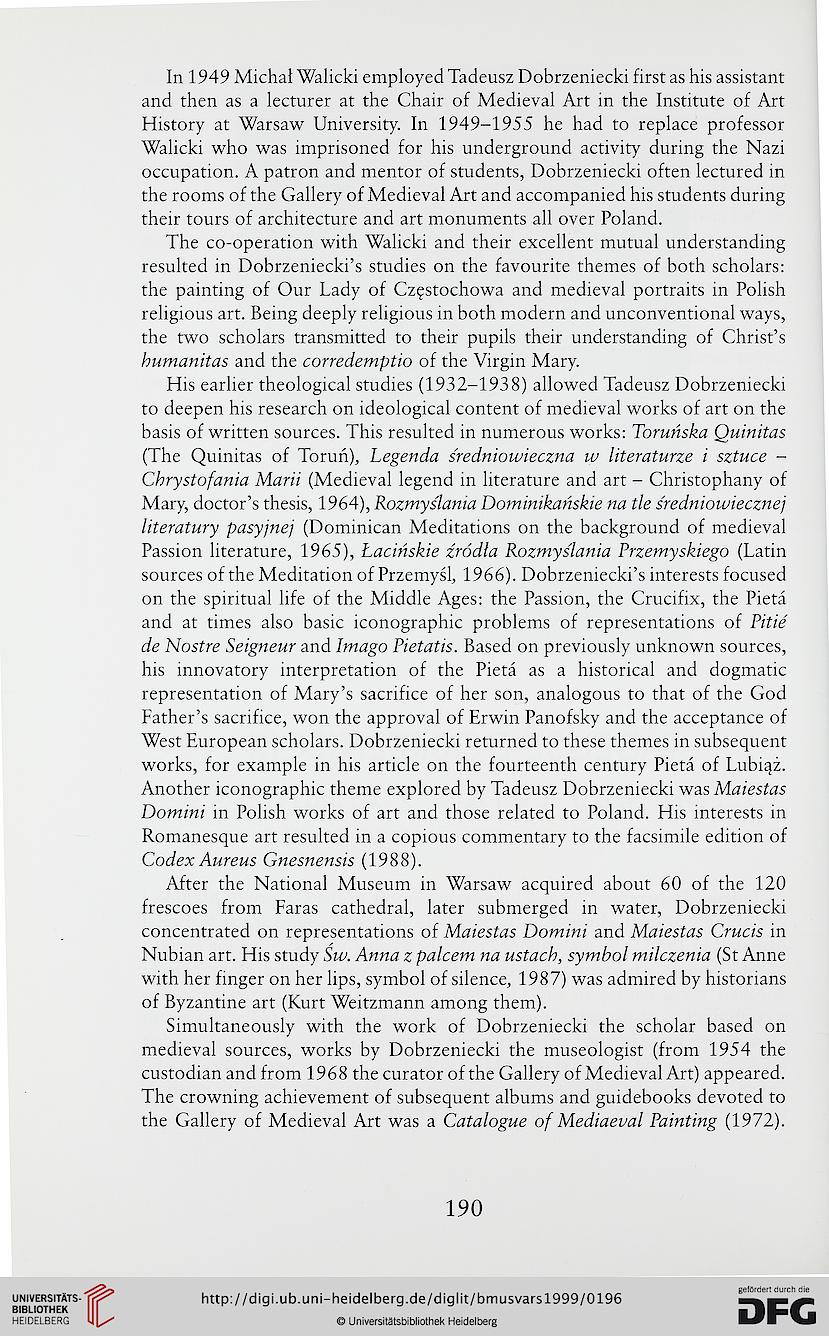 Information about OCR text
In 1949 Michał Walicki employed Tadeusz Dobrzeniecki first as his assistant
and then as a lecturer at the Chair of Medieval Art in the Institute of Art
History at Warsaw University. In 1949-1955 he had to replace professor
Walicki who was imprisoned for his underground activity during the Nazi
occupation. A patron and mentor of students, Dobrzeniecki often lectured in
the rooms of the Gallery of Medievał Art and accompanied his students during
their tours of architecture and art monuments all over Poland.

The co-operation with Walicki and their excellent mutual understanding
resulted in Dobrzeniecki^ studies on the favourite themes of both scholars:
the painting of Our Lady of Częstochowa and medieval portraits in Polish
religious art. Being deeply religious in both modern and unconventional ways,
the two scholars transmitted to their pupils their understanding of Christ’s
bumanitas and the corredemptio of the Virgin Mary.

His earlier theological studies (1932-1938) allowed Tadeusz Dobrzeniecki
to deepen his research on ideological content of medieval works of art on the
basis of written sources. This resulted in numerous works: Toruńska Quinitas
(The Qumitas of Toruń), Legenda średniowieczna w literaturze i sztuce -
Cbrystofania Marii (Medieval legend in literaturę and art - Christophany of
Mary, doctor’s thesis, 1964), Rozmyślania Dominikańskie na tle średniowiecznej
literatury pasyjnej (Dominican Meditations on the background of medieval
Passion literaturę, 1965), Łacińskie źródła Rozmyślania Przemyskiego (Latin
sources of the Meditation of Przemyśl, 1966). Dobrzenieckie interests focused
on the spiritual life of the Middle Ages: the Passion, the Crucifix, the Pieta
and at times also basie iconographic problems of representations of Pitie
de Nostre Seigneur and Imago Pietatis. Based on previously unknown sources,
his innovatory interpretation of the Pieta as a historical and dogmatic
representation of Mary’s sacrifice of her son, analogous to that of the Cod
Father’s sacrifice, won the approval of Erwin Panofsky and the acceptance of
West European scholars. Dobrzeniecki returned to these themes in subseąuent
works, for example in his article on the fourteenth century Pieta of Lubiąż.
Another iconographic theme explored by Tadeusz Dobrzeniecki was Maiestas
Domini in Polish works of art and those related to Poland. His interests in
Romanesąue art resulted in a copious commentary to the facsimile edition of
Codex Aureus Gnesnensis (1988).

After the National Museum in Warsaw acąuired about 60 of the 120
freseoes from Faras cathedral, later submerged in water, Dobrzeniecki
concentrated on representations of Maiestas Domini and Maiestas Crucis in
Nubian art. His study Sw. Anna z palcem na ustach, symbol milczenia (St Annę
with her finger on her lips, symbol of silence, 1987) was admired by historians
of Byzantine art (Kurt Weitzmann among them).