Information about full text search/OCR
The General Description of Hungary
6
Eread and Wine: their Bread is hardly exceeded by any in Europe*, … so good and well tailed Bread, that with Wine, it was a Feail; and
A Journey from Vienna in Austria, to Larissa in Thessalia
27
Mahomet himself was wounded in the bread, lost his Ordnance, and
Some Occurrencies and Observations in this Journey
52
the Emperor’s Armes cut in a Stone, which he wore upon his bread;
A Journey from Vienna into Styria, Carinthia, Carniola, Friuli
87
Nuts, which the people eat, and some make Bread of; which notwith-
A Journey from Norwich to Colen in Germany
97
gain their Bread with hard labour. I saw those who rasped Brazil,
98
placed out of their reach a loaf of bread, the last remedy against star-
A Journey from Colen to Vienna
117
lieve the poor who wanted bread, invited them together into a Barn,
The Description of Vienna
156
Bread, as much as two men could well lift, then two other men
A Journey from Vienna in Austria to Hamburg
172
Very large flying Fifhes. A.Sea-horfe. Bread Qi Mount Lib anus. A
A Journey from Venice to Genoa
213
they guarded their bread,was ssat,broad, sireight, and even ; the other 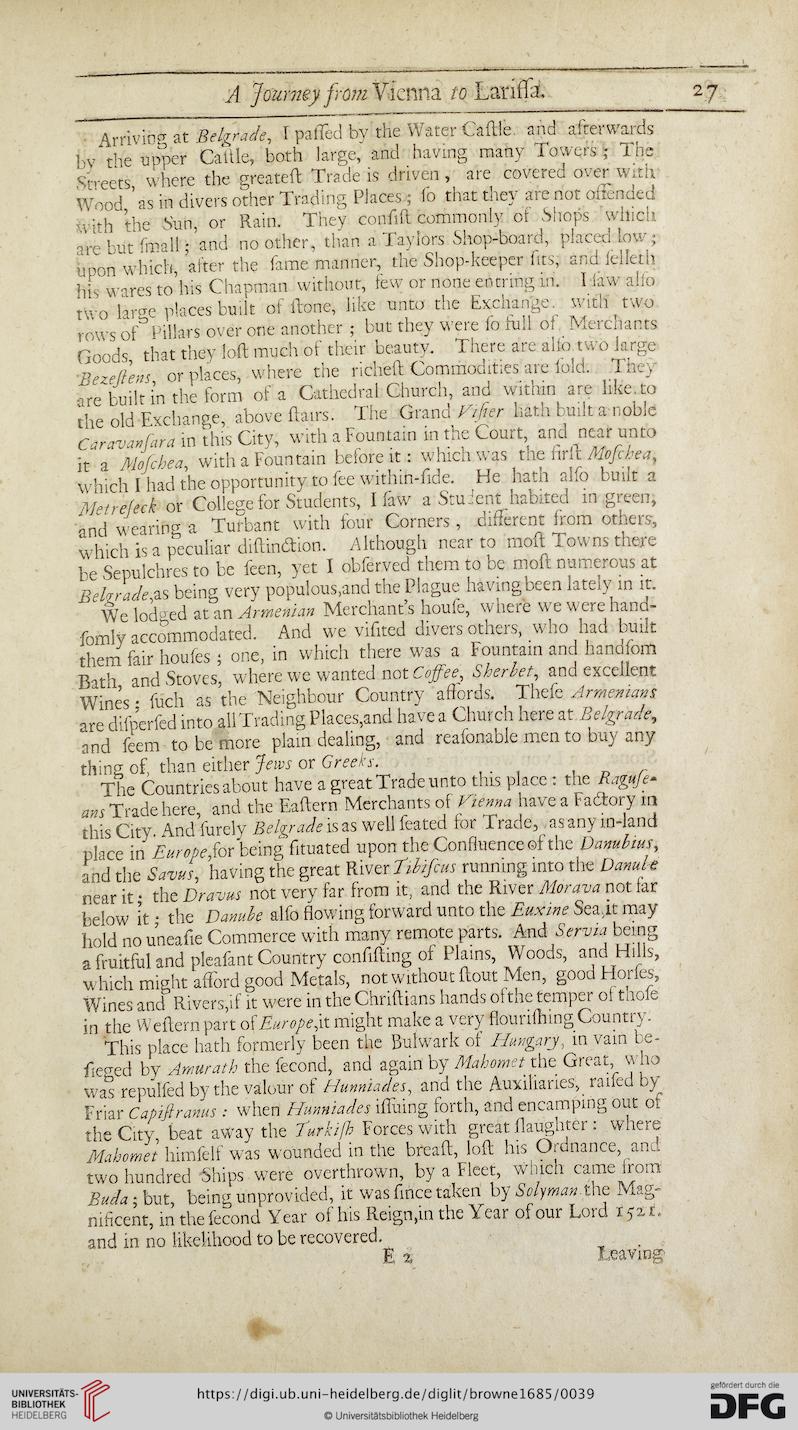 A Journey from Vienna to Larissa.
Arriving at Belgrade, I palled by the Water Castle. and afterwards
by the upper Cattle, both large, and having many Towers ; The
Streets, where the greatest Trade is driven, are covered over with
Wood, as in divers other Trading Places ; so that they are not ossended
with the Sun, or Rain. They consist commonly of Shops which
are but small; and no other, than a Taylors Shop-board, placed low;
upon which, after the same manner, the Shop-keeper sits, and selleth
his wares to his Chapman without, few or none entring in. I law allo
two large places built of Rone, like unto the Exchange, with two
rows of Pillars over one another ; but they were so sull of Merchants
Goods, that they lost much of their beauty. There are allb two large
Bezeftens, or places, where the richest Commodities are sold. They
are built in the form of a Cathedral Church, and within are like, to
the old Exchange, above slairs. The Grand Vifier hath built a noble
Carawanfara in this City, with a Fountain in the Court, and near unto
it a Mofchea, with a Fountain besore it: which was the sirst Mofchea,
which I had the opportunity to see within-side. He hath also built a
Metrejeck or College for Students, I saw a StuJent habited in green,
and wearing a Turbant with four Corners, difserent from others,
which is a peculiar distin&ion. Although near to most Towns there
be Sepulchres to be seen, yet I observed them to be most numerous at
Belgrade,2s being very popu!ous,and the Plague having been lately in it.
We lodged at an Armenian Merchant’s house, where we were hand-
somly accommodated. And we visited divers others, who had built
them fair houses ; one, in which there was a Fountain and handsom
Bath, and Stoves, where we wanted not Coffee, Sherbet, and excellent
Wines; such as the Neighbour Country affords. These Armenians
are dispersed into all Trading Places,and have a Church here at Belgrade,
and seem to be more plain dealing, and reasonable men to buy any
thing of, than either Jews or Greeks.
The Countries about have a great Trade unto this place : the Ragufe*
ans^wdeMvce, and the Eastern Merchants of Vienna have a Fadtory in
this City. And surely Belgrade is as well seated for Trade, as any in-land
place in Europe for being fituated upon the Conssuence of the Danubtus,
and the Saws, having the great River sibifcus running into the Danube
near it; the Draws not very far from it, and the River Morava not far
below it; the Danube also ssowing forward unto the Euxine Sea.it may
hold no uneasie Commerce with many remote parts. And Servia being
a fruitful and pleasant Country considing os Plains, Woods, and Hills,
which might afford good Metals, not without Rout Men, good Horses,
Wines and Rivers,if it were in theChristians hands ofthe temper of thole
in the Western part of Ear ope ,it might make a very ssourishing Country.
This place hath formerly been the Bulwark os Hungary, in vain be-
sieged by Amurath the second, and again by Mahomet the Great, who
was repulsed by the valour of Hunniades, and the Auxiliaries, raised by
Friar Capiftranus : when Hunniades issuing forth, and encamping out os
the City, beat away the furkifb Forces with great (laughter: where
Mahomet himself was wounded in the bread, lost his Ordnance, and
two hundred Ships were overthrown, by a Fleet, which came from
2Wh;but, being unprovided, it was since taken by Solyman.the Mag-
nificent, in the second Year of his Reign,in the Year of our Lord ipm
and in no likelihood to be recovered.
E % Leaving'