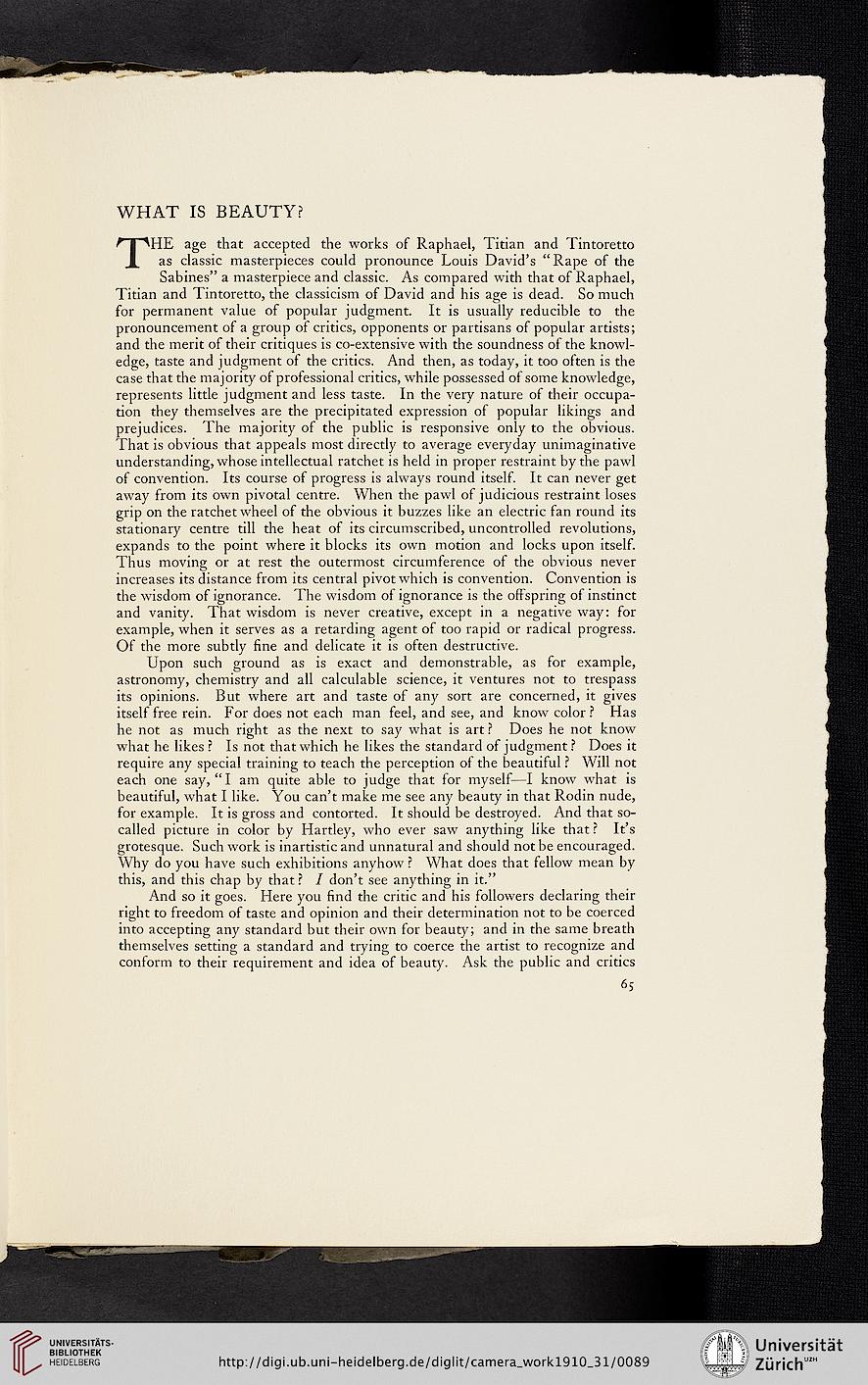 Information about OCR text
WHAT IS BEAUTY?

THE age that accepted the works of Raphael, Titian and Tintoretto
as classic masterpieces could pronounce Louis David’s"Rape of the
Sabines" a masterpiece and classic. As compared with that of Raphael,
Titian and Tintoretto, the classicism of David and his age is dead. So much
for permanent value of popular judgment. It is usually reducible to the
pronouncement of a group of critics, opponents or partisans of popular artists;
and the merit of their critiques is co-extensive with the soundness of the knowl-
edge, taste and judgment of the critics. And then, as today, it too often is the
case that the majority of professional critics, while possessed of some knowledge,
represents little judgment and less taste. In the very nature of their occupa-
tion they themselves are the precipitated expression of popular likings and
prejudices. The majority of the public is responsive only to the obvious.
That is obvious that appeals most directly to average everyday unimaginative
understanding, whose intellectual ratchet is held in proper restraint by the pawl
of convention. Its course of progress is always round itself. It can never get
away from its own pivotal centre. When the pawl of judicious restraint loses
grip on the ratchet wheel of the obvious it buzzes like an electric fan round its
stationary centre till the heat of its circumscribed, uncontrolled revolutions,
expands to the point where it blocks its own motion and locks upon itself.
Thus moving or at rest the outermost circumference of the obvious never
increases its distance from its central pivot which is convention. Convention is
the wisdom of ignorance. The wisdom of ignorance is the offspring of instinct
and vanity. That wisdom is never creative, except in a negative way: for
example, when it serves as a retarding agent of too rapid or radical progress.
Of the more subtly fine and delicate it is often destructive.
Upon such ground as is exact and demonstrable, as for example,
astronomy, chemistry and all calculable science, it ventures not to trespass
its opinions. But where art and taste of any sort are concerned, it gives
itself free rein. For does not each man feel, and see, and know color ? Has
he not as much right as the next to say what is art ? Does he not know
what he likes ? Is not that which he likes the standard of judgment ? Does it
require any special training to teach the perception of the beautiful ? Will not
each one say, "I am quite able to judge that for myself—I know what is
beautiful, what I like. You can’t make me see any beauty in that Rodin nude,
for example. It is gross and contorted. It should be destroyed. And that so-
called picture in color by Hartley, who ever saw anything like that ? It’s
grotesque. Such work is inartistic and unnatural and should not be encouraged.
Why do you have such exhibitions anyhow ? What does that fellow mean by
this, and this chap by that ? I don’t see anything in it.”
And so it goes. Here you find the critic and his followers declaring their
right to freedom of taste and opinion and their determination not to be coerced
into accepting any standard but their own for beauty; and in the same breath
themselves setting a standard and trying to coerce the artist to recognize and
conform to their requirement and idea of beauty. Ask the public and critics
65